Lessons From Successful Knicks Seasons of the Past 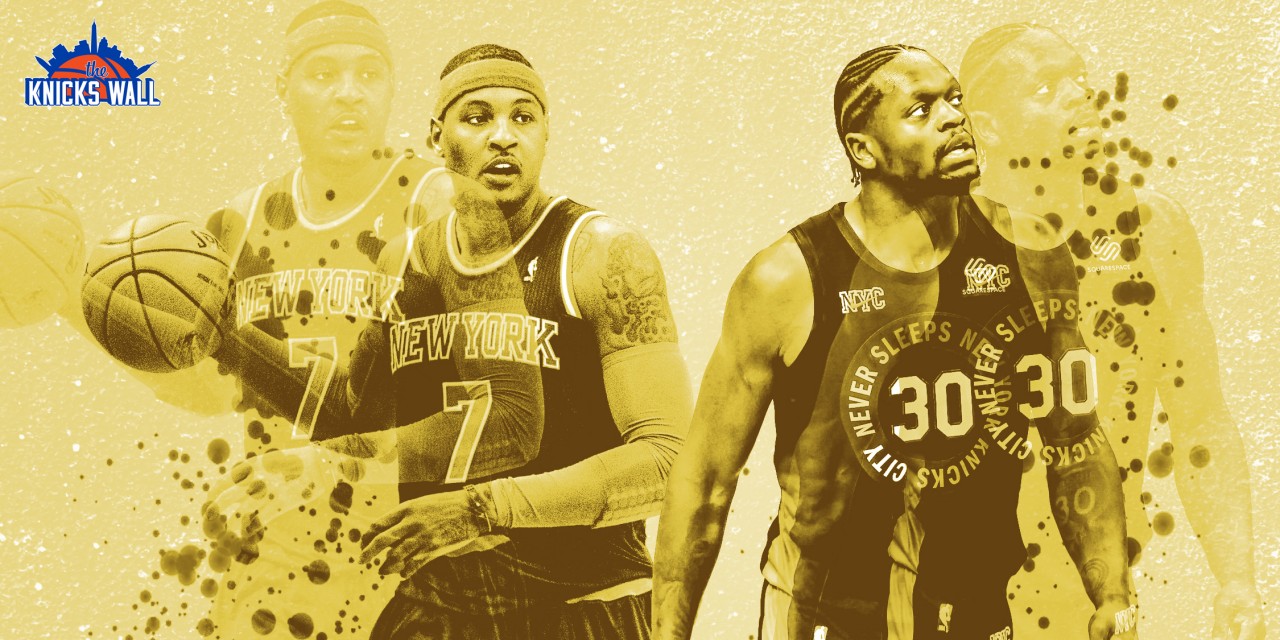 The Knicks have often failed to live up to raised expectations following successful seasons. Here’s how the franchise handled success in the past and what we can glean from it.

The New York Knicks were not only the biggest surprise of the 2020–21 NBA season; they produced one of the most unexpected winning campaigns in franchise history.

It ended on a dark note, but the future remains bright. As joyous then deflating as the journey was, the fact that it felt like the genuine start of something rather than a fluke is the most exciting thing about it.

The success in Tom Thibodeau’s first season undoubtedly sped up the rebuilding timetable. Suddenly, the Knicks have the foundation of a playoff team plus assets—young talent, draft picks, cap space—with which to build a contender.

Facing a summer full of possibilities and potentially franchise-altering choices for Leon Rose, let’s reflect on some notably competitive seasons of Knicks past to glean some roster-building lessons for the present.

What happened: The Knicks averaged 25.1 wins per season from 1959–66. They began to gradually improve after drafting Willis Reed in 1964 and trading for Walt Bellamy and Dick Barnett in 1965. In 1966, they scored the no. 1 overall pick and landed All-Star Cazzie Russell. The next year, they won 36 games and squeaked into the playoffs.

In 1967, the Knicks drafted Walt Frazier (no. 5 overall). That fall, Bill Bradley made his belated debut after spending two years pursuing a Rhodes scholarship. The 1967–68 campaign also ended up being the first season for legendary head coach Red Holzman, who took over after Dick McGuire was fired following a 15-22 start.

Those Knicks won 43 games and lost in the first round. Regardless, the team established itself as a burgeoning contender. One year later, the Knicks flipped Bellamy for Dave DeBusschere and won 54 games, then took the title in 1970.

In 1971, they extended the window by acquiring Earl “The Pearl” Monroe, which helped them secure a second ring in 1972–73.

Lesson(s): All of this preceded free agency, and this era is littered with examples of front offices inexplicably pulling off trades by swapping groups of underwhelming role players for stars looking for a change of scenery. The Knicks also hit home runs in the draft after years at the bottom of the standings—the OG Process.

The NBA was vastly different then, but there is one ultimate moral of the story here: patience. New York organically built a quality squad through the draft, then parlayed supporting pieces into stars (but not superstars) to put them over the top. Once Holzman was installed, his consistent competency and an emphasis on an unselfish culture produced some of the most pristine basketball ever played.

What happened: 1980–81 was perhaps the most forgotten good season in Knicks history. The team was comprised of fairly promising young players and a long-time coach (Holzman) with a proclivity for veterans (sound familiar?). Yet, Holzman adapted just enough, and the Knicks came out of nowhere to win 50 games after averaging 38.5 wins per season since 1974.

The year before, the Knicks won 39 games and barely missed out on the playoffs. As a result, GM Eddie Donovan added All-Star Campy Russell for a first-rounder in a three-team trade. He averaged 16.4 points per game and proved to be a difference-maker.

Russell’s addition, the further development of homegrown guys, an elite defense led by Richardson, and a 19-9 post-All-Star break stretch were enough to turn the Knicks into a pseudo-contender.

Unfortunately, they flamed out in the first round to the Chicago Bulls. That summer, instead of engaging Kareem Abdul-Jabbar’s desire to return to his hometown, the Knicks front office—evidently operating on tilt—made a slew of impetuous, narrow-minded trades for washed veterans. The Knicks regressed to 33 wins in Holzman’s final season, and, by 1984, only two players remained from their 50-win season.

Lesson(s): Cocaine had a lot to do with the downfall of this team, but so did the short-term thinking. Thibodeau has more in the tank than Holzman, but he’s a safe bet to similarly advocate for the acquisition of an established star and accelerated re-tooling.

Overall, the Knicks have a troubling history of exchanging stability for star-chasing. If an accomplished leader and top-1o player like Damian Lillard is attainable, that’s a worthy pursuit. If not, allow this cast to develop together, and don’t jump the gun. If you build culture, the stars will come.

What happened: The Knicks spent four years in the lottery before Patrick Ewing and the “Bomb Squad” shot their way to 52 wins in the second season under Rick Pitino.

As with 1980–81, this team snuck into the playoffs the year prior. In the ensuing offseason, GM Al Bianchi made two shrewd moves: boldly trading the proven Cartwright for a young Board Man named Charles Oakley, then drafting Rod Strickland to back up fellow New York City blacktop legend, Mark Jackson.

Pitino implemented a proto-Seven-Seconds-or-Less style of play that could only work with a youthful roster ready to run-and-gun and featuring perimeter play-making. The “Bombinos” launched over 400 more triples than any other team and shattered the record for threes in a season. They enjoyed a distinct cohesion and relished hooping together. Patrick Ewing, now a star, anchored the defense and half-court offense.

The Bockers swept the Sixers before an epic seven-game battle with Michael Jordan did them in (no shame). Afterward, Pitino took his talents to the University of Kentucky (World Wide Wes was not involved, I think…).

The Knicks brought back eight players and regressed to 45 games, though the franchise was recharged. Once they found the right coach (Pat Riley in 1991–92), they were ready to contend.

Lesson(s): Perimeter play-making is essential. The 2020–21 Knicks were able to secure the no. 4 seed despite a dearth of skill on the outside and ranking 29th in assist percentage.

In the playoffs, that flaw was on stark display as Julius Randle and R.J. Barrett ineffectively stumbled into clogged lanes of Hawks defenders and Derrick Rose ran out of gas. Immanuel Quickley is more of a heat-checker than a playmaker. Elfrid Payton was never it. By contrast, Trae Young dominated the series.

The Knicks have been searching for a franchise point guard for decades. For a brief period of time, the combo of Jackson and Strickland offered perhaps the most exciting back-court pairing in New York since Clyde and The Pearl. Considering the plethora of guard options that could be available this summer—either via free agency, a trade, or the draft—and the Knicks resources, there is no excuse to not improve in that area—and no choice.

What happened: I’m going to gloss over this glorious squad because it represented a culmination of a decade-plus of team-building, which included a 1994 trip to Game 7 of the Finals.

Yes, the Finals run from a no. 8 seed remains unprecedented, but the strike-shortened season, injuries, and lack of time to establish chemistry with Latrell Sprewell and Marcus Camby contributed to the mediocre 27-23 record.

Lesson(s): Culture matters. The Dolan family had recently purchased the team but had yet to infect it with awfulness, while Jeff Van Gundy (with help from assistant Tom Thibodeau) had inherited and built upon the culture of rigid competitiveness established by Riley.

The Knicks would remain relevant in the East for a few more seasons, then hand out alarmingly bad contracts to Allan Houston and Sprewell, which fittingly began a decade of expensive incompetence. Let’s not do that again.

What happened: Before this season, 2012–13 was the last time the Knicks fielded an upper-echelon team. Led by Carmelo Anthony, that squad produced a thrilling 54-win campaign fueled by high-profile, borderline washed vets, and a three-point heavy style reminiscent of Bomb Squad.

The 2012–13 Knicks temporarily energized the city until running out of steam in the second round, but the whole thing was never tenable. Anthony was an MVP candidate on the verge of decline, while the organization was bereft of assets. They won 37 games in 2013–14, and 17 the season after.

Lesson(s): Frankly, the main reason behind this team’s success also rendered it unsustainable: the Anthony trade. We all know the story and love ‘Melo, but, even a decade later, there’s still no defense for Anthony—and his agent, Leon Rose—forcing the Knicks to totally leverage their future in February 2012 instead of signing outright that July. Plus, the $100 million signing of Amar’e Stoudemire in 2010—a thirsty, star-chasing move by the front office after missing out on LeBron, Wade, etc.—was regrettably imprudent.

The current stars on the market aren’t in the same situation as Anthony. However, the Knicks need to be wary of how much they throw into a package for a Bradley Beal or Lillard, should they pursue a trade for a star. Those guys are top-notch, but their impact is negated if the talent around them is sapped.

More broadly, the Knicks can simply build from here. We saw how Knicks fans responded to the success, effort, and competency of 2020–21. Anecdotally, Knicks fans seem divided—at least, emotionally—on parting with Barrett or Quickley, and that’s appropriate. That’s sports. That’s why we root for laundry.