Let’s Call It: The Knicks Have the Bleakest Outlook in the Whole League 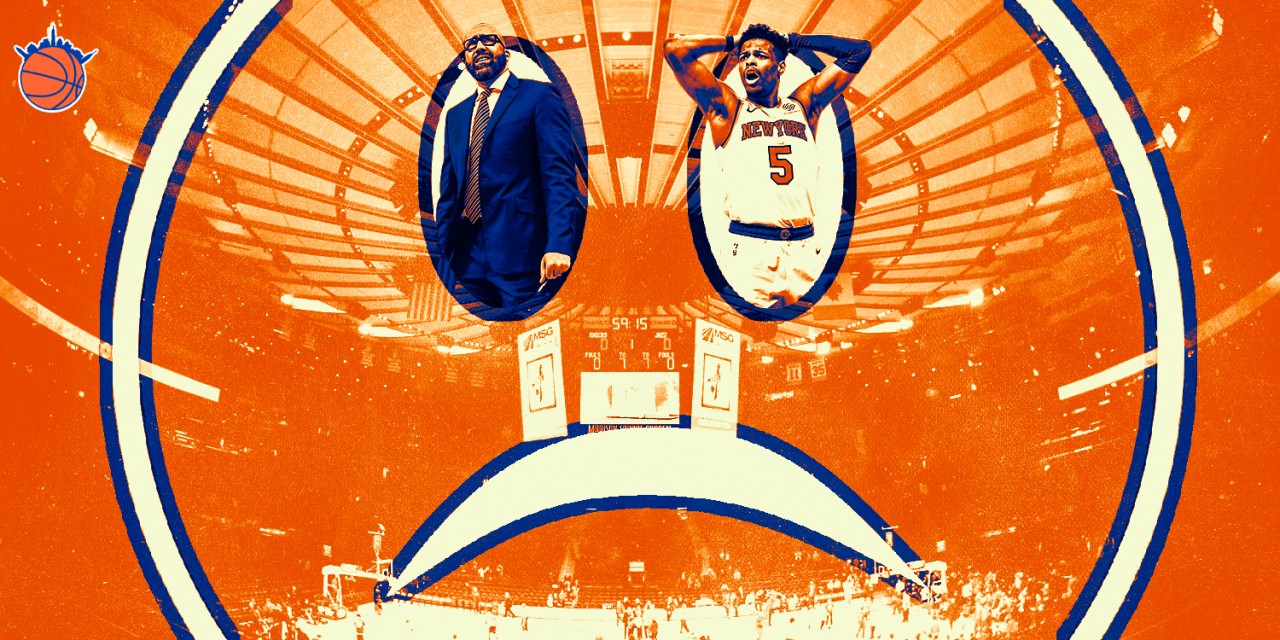 Following the David Fizdale firing, the Knicks’ path to relevancy has only been increased in hardship, with no clear plan in place.

The 4-19 New York Knicks have fired head coach David Fizdale, one night after losing to the Denver Nuggets by 37 points at The Garden. This marks the team’s seventh coaching change of the decade, and the fourth head coach fired under the stewardship of team president Steve Mills. Let’s use this charmed moment to coronate what we’ve all known for quite some time—this is not only the worst franchise in the contemporary NBA, but it also possesses a singularly bleak outlook. Welcome to The Darkest Timeline, and fashion your goatee in accordance.

It’s hard to think of a worse start to this forthcoming decade. The Knicks, despite being the most valuable franchise in the goddamn league, have won one playoff series in the last decade. The winningest executive in the sport’s history tried to redirect this organization, and he failed in truly astonishing ways.

At 4-19, the Knicks have the worst record in a paltry Eastern Conference, and are coming off consecutive drubbings of historic proportions.

Their cadre of former lottery pick guards are all looking like total busts in their own special ways, and they’re all competing with each other for playing time. Dope!

This summer, the Knicks went on a wholesale, bulk splurge for the one position that no team uses anymore, and this happened only after Mills and general manager Scott Perry admitted to fucking up free agency and whiffing on every one of their major targets.

R.J. Barrett, the 2019 draft’s third overall pick, is fading quietly after an encouraging start to the season. Last year’s top selection, Kevin Knox, looks like a bona fide bust, and 2017’s eighth overall draft pick Frank Ntilikina can be lovingly described as a depreciating asset. The Knicks’ only sure-thing lottery pick of recent memory was traded for cap space and draft picks, which are of course owned by the team that now employs the aforementioned sure-thing lottery pick and thus is winning a lot of games. Mitchell Robinson—the prodigious rim-running center who’s perhaps the only player worth a damn right now on this New York roster—is coming off the bench and is legitimately incompatible with Julius Randle, who the team has to play a lot to justify his splashy $63 million contract.

Right now, the only qualified person ostensibly interested in coaching the New York Knicks is Metta World Peace. Last week on Jalen and Jacoby, Bronx-born rapper Fat Joe recalled screaming at Clyde Frazier in frustration this season, declaring that this is the worst things have ever been at MSG. Have you ever doubted the word of the Terror Squad, even once?

Barrett, who is shooting under 40% from the floor thus far, is now at the mercy of who-and-whatever the Knicks install for the rest of this campaign (interim head coach Mike Miller).

Is there a bleaker timeline in the league? I genuinely do not think so. Fight me about this, but the Charlotte Hornets have a more exciting core of Devonte’ Graham and P.J. Washington, plus several expiring contracts as they head into their post-Kemba realities. The Sacramento Kings, long mocked as the other most incompetent team in the NBA, are spiritedly fighting for a playoff spot in the crowded Western Conference despite an 0-6 start. Knicks fans would probably donate an extremity for a point guard like De’Aaron Fox. Double that down for Trae Young and the Atlanta Hawks.

The Washington Wizards are up there, but that’s mainly because John Wall’s leg super-de-dooper exploded, and retroactively punishing GM’s for injury outcomes is just not the wave, folks. Besides, the Knicks don’t even have a star player to get injured in the first place at the moment. Also, Ian Mahinmi’s contract expires this year. The Cleveland Cavaliers appear more committed to their new coach, John Beilein, and they also won a world championship in 2016. Collin Sexton looks markedly better than any of the young Knicks guards, and Kevin Love is probably a more valuable trade piece than the sum of all those Knicks power forwards. The Warriors still have Stephen Curry and Klay Thompson sidelined in suits; the Thunder employ Shai Gilgeous-Alexander and are holding 30 thousand 100 million future draft picks; if the Spurs actually miss the postseason, it will be the first time in more than two decades.

Could it maybe be the Detroit Pistons, with Blake Griffin and Andre Drummond looking disastrous on a shared floor? I guess, maybe? But I’d still rather watch what the Pistons do for the next year or so. Is there a half-decent argument for the Chicago Bulls too? Sure, if you want, whatever. After the Fizdale firing, my homie Rohan Nadkarni put it best for Sports Illustrated: the Knicks aren’t even worth caring about, or expanding upon, or remembering in existence.

They’re living a joyless, sordid, absolutely shit life at a time when the NBA is more fun and popular (and competitive) than ever before. Barrett and Robinson are maybe the only two bright spots in this entire web of yuckery, and they will inevitably be destroyed by the franchise’s ineptitude in player development or balling out for another team as the Knicks chase the 2021 free agent market with dogged futility.

We are rooting for the worst team in the league, one with almost certainly the bleakest future. Our Trump-loving, union-busting, pudding-brained owner will never step down, because the Knicks are an insanely profitable business to own. This is what we have, this is who we are. Steve Mills and Scott Perry will probably make the basketball decisions until the day this planet is fully engulfed in flames. The Knicks are very dumb, and if you’re still choosing to inhabit the world of the NBA, please spend your Friday night thinking about another team. Otherwise, just tell people you love them, conduct yourself with integrity, etc. You, lovely reader, deserve a not-the-worst outlook.