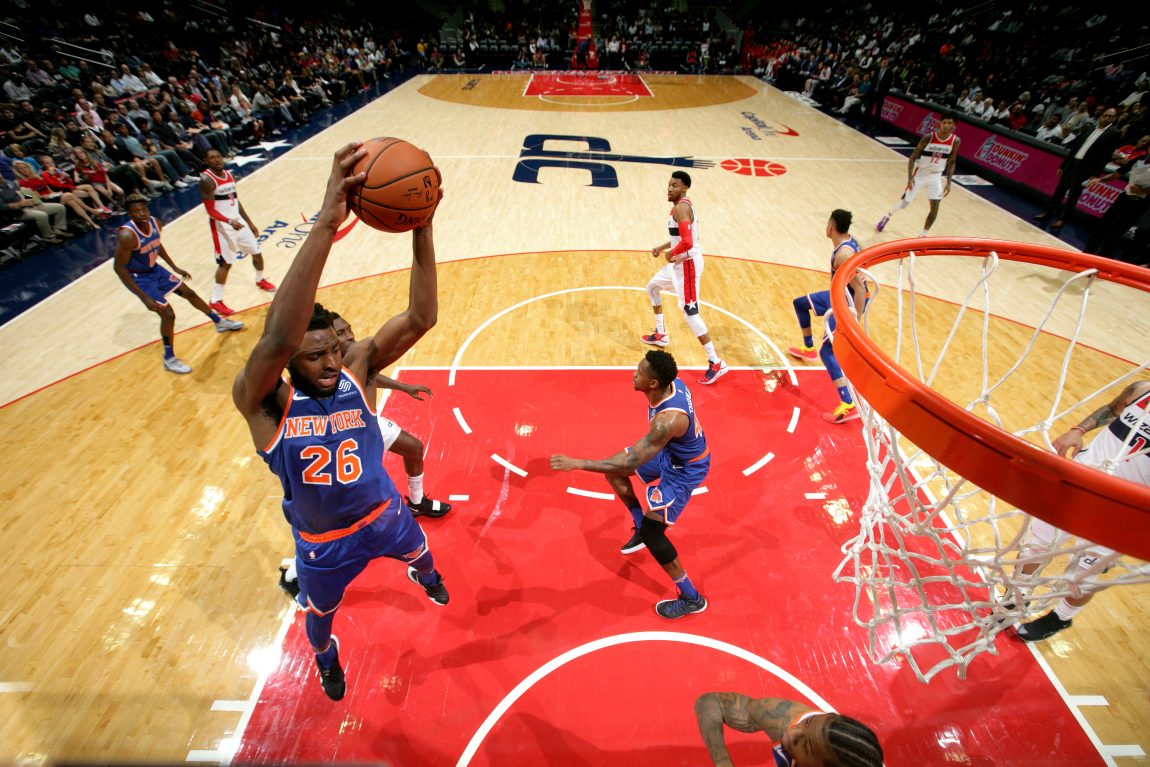 New York’s second-round pick was all over the court on Monday night, finishing off alley-oops and attacking the rim with vigor. Could he open up the Knicks’ offense this season with his rim running?

Mitchell Robinson is going to be all sorts of fun to watch this year, which was obvious after only two quarters of the Knicks’ preseason opener against the Washington Wizards last night. The 20-year-old only saw 16 minutes of action, but boy did he make the most of those minutes. The stats won’t blow you away—six points, seven rebounds, one block and a 0-4 mark from the foul line—but his offensive gravity, in particular, jumped off the screen.

Let’s be clear; this kid is raw. He is going to foul a lot on defense. Some nights he will have more fouls than points. But he is going wreak havoc on the other end as he gradually learns the intricacies of NBA offenses. He doesn’t have these intricacies in his repertoire yet, but his sheer athleticism is already enough to panic opposing defenses. In the big-man-mold of prime Tyson Chandler or DeAndre Jordan, Robinson is going to be a terror rolling to the rim, and David Fizdale and the Knicks didn’t waste any time tapping into that threat last night from a number of situations on the floor.

Robinson had been on the floor 90 seconds when he caught and dispatched his first lob as a New York Knick. The play is a basic one; a dribble hand-off with Mario Hezonja at the top of the key, roll hard to the rim, and catch a perfectly timed lob pass by Hezonja as Jason Smith—Robinson’s defender—slides over to prevent a layup for Hezonja. Simple but effective. When Robinson rolls hard to the rim, he is the primary threat occupying the defense, and for that split second when he’s rolling, help defenders will be sucked towards him a couple of extra steps, leaving shooters open on the perimeter even if he doesn’t get the lob.

This next play has been taken straight from the summer daydreams of coach Fizdale. Robinson contests Smith’s low percentage mid-ranger and forces a miss on one end, gallops down the floor in transition, and catches a lob from Emmanuel Mudiay at the other end. All in a few long strides and just a few short seconds. Fizdale has been preaching transition all summer, and this is precisely what he’s talking about—leveraging young legs for easy points. Defenders will scramble to cut off the rim running Robinson, opening up the perimeter for those quick hitting threes that are so demoralizing for defenses.

Despite not converting the dunk, this ATO set Fizdale draws up was one of my favorite plays of the night. After a dribble handoff on the wing, Trey Burke curls into the paint to set a back-pick for Robinson rolling to the rim after a ball screen for Kevin Knox at the top. This is some lovely Spanish pick-and-roll, screen-the-screener action, even if the execution was a little off. Burke is a tad late on the back-pick, and doesn’t make contact with Robinson’s defender. Even so, if Knox’s lob pass was a touch lower, it would have been a dunk.

The other wrinkle with this play is when the guy setting the back pick—in this case, Burke pops out to the three-point line as all defensive eyes are on Robinson’s dive to the rim. With Tim Hardaway Jr., Hezonja, Knox or eventually Kristaps Porzingis—who are all bigger bodies to set bigger screens—setting the back pick, this will become a difficult, pick-your-poison decision for defenses.

This last example highlights the bail-out value of a simple pick and roll at the end of a possession or as a play breaks down. Here, the Knicks run motion strong, with Knox coming off a double screen towards the middle of the floor as the first option. Knox’s defender, Bradley Beal, easily gets through a weak pair of screens from Lance Thomas and Robinson as Knox fills to the corner, leaving Robinson and Thomas to work a sideline pick-and-roll. Otto Porter ices Thomas and forces him towards the baseline, where Ian Mahinmi is ready to help, leaving the middle open for Robinson to catch the lob. He’s too big and bouncy for the rotating help defender, and draws the foul.

The beauty of this is that it will always be there. In late-clock situations, it’s a quick action to generate a high percentage shot. And again, like the previous clips, Robinson’s gravity opens up perimeter shooters. Look how open Kevin Knox is in the corner here! If Lance Thomas, not exactly a noted pick-and-roll orchestrater, can find the big fella, then one of New York’s 19 point guards will have no trouble.

These are just a few examples in a tiny sample size of very rusty preseason basketball against defensive juggernauts Ian Mahinmi and Jason Smith, I know, but those guys are real NBA players. The question heading into the season was whether Robinson should be spending the majority of his time in the G League, and that, at least, is beginning to be answered. This kid can contribute right now, and whilst he’ll take his lumps this year, he should get better and better.

It will be fun to see how Fizdale develops one of his most tantalizing Fiz-kids. Luckily, as last night showed, he can keep it simple for his thoroughbred young pogo-stick center. Run hard and jump high. That’s enough for now.