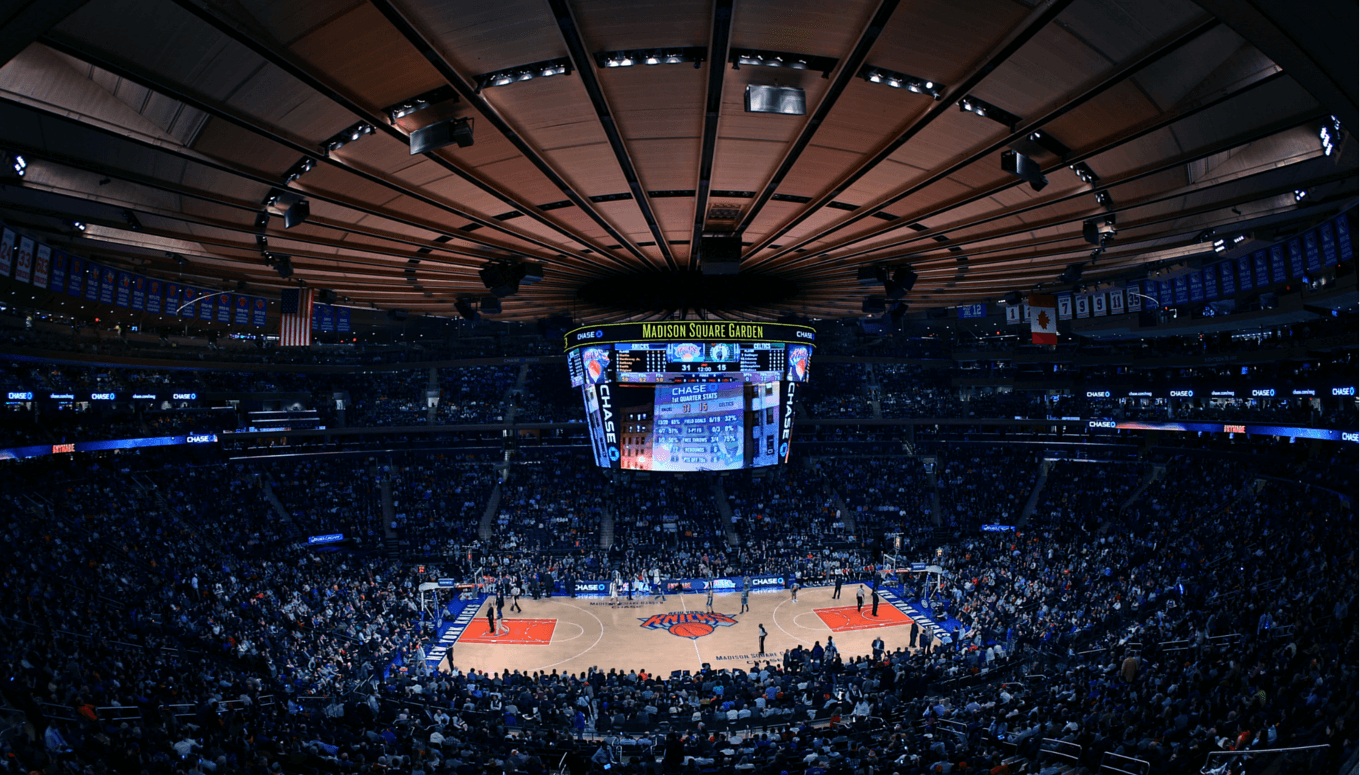 The Knicks have played 10 of their first 14 games at Madison Square Garden. Will the front-loaded home schedule hurt them moving forward?

This 8-6 start for the Knicks has been nice for a team that was projected to be at the basement of the Eastern Conference this year. There have been some thrilling wins, including last night’s over the Utah Jazz, games in which the Garden has felt alive. I went to the one home game this year that was not remotely close or exciting, against the Houston Rockets, so I’m still waiting for my first taste of the pure energy that has been emanating from MSG recently, but even on television, the excitement is palpable.

But how long will the Knicks be able to feed off of that energy? 10 of their first 14 games being played in New York represent the most games at home over the first 14 contests in franchise history. The Knicks have been a franchise for 72 years! They have secured seven of their eight wins at home, while holding a poor 1-3 record on the road. Historically, and intuitively, NBA teams have performed marginally better at home than on the road, but that trend has decreased a bit since 2012-13: 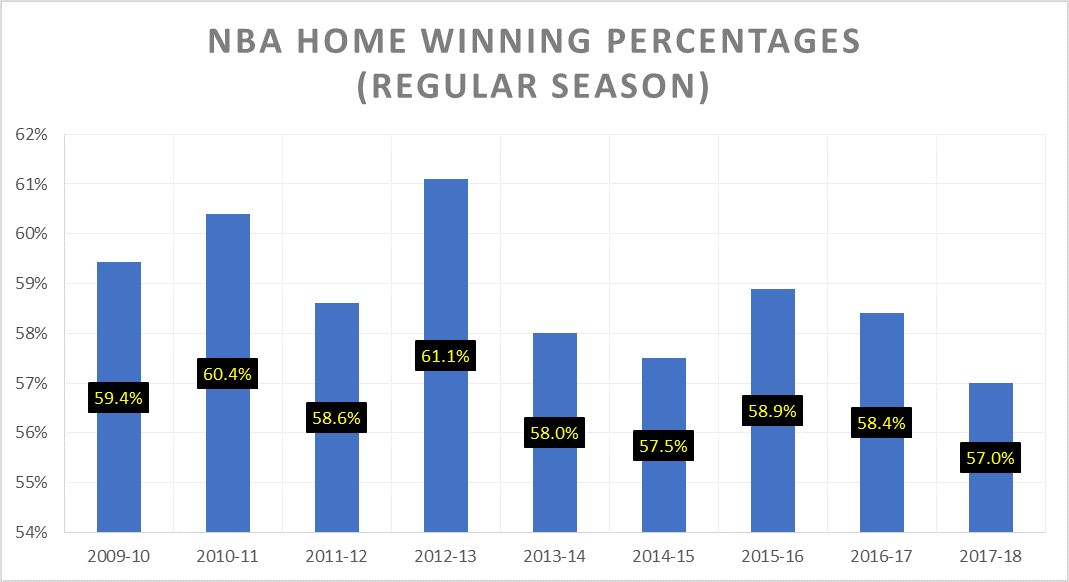 The home winning percentage of teams has steadily declined since the 1970’s, when teams were winning nearly 70 percent of their home games (check out this article from 2015 from Tom Haberstroh for a deeper dive there). The lowest percentage is this year, but keeping small sample size in mind, it’s not quite statistically significant yet. The 57.5 winning percentage from 2014-15 sticks out as the lowest number. The Knicks have been so bad for certain stretches over this period that it’s hard to deduce how strong of a home-court advantage they hold, but from a narrative perspective, there’s nothing quite like New York.

Playing at the Garden has long been an event of epic proportions, an opportunity that every opposing player relishes. Every Knick that has ever donned the orange and blue has talked about how great it is to call MSG home. Has that actually led to success for the Knicks at home? For the most part, when the Knicks have been good, they’ve held down home-court effectively: 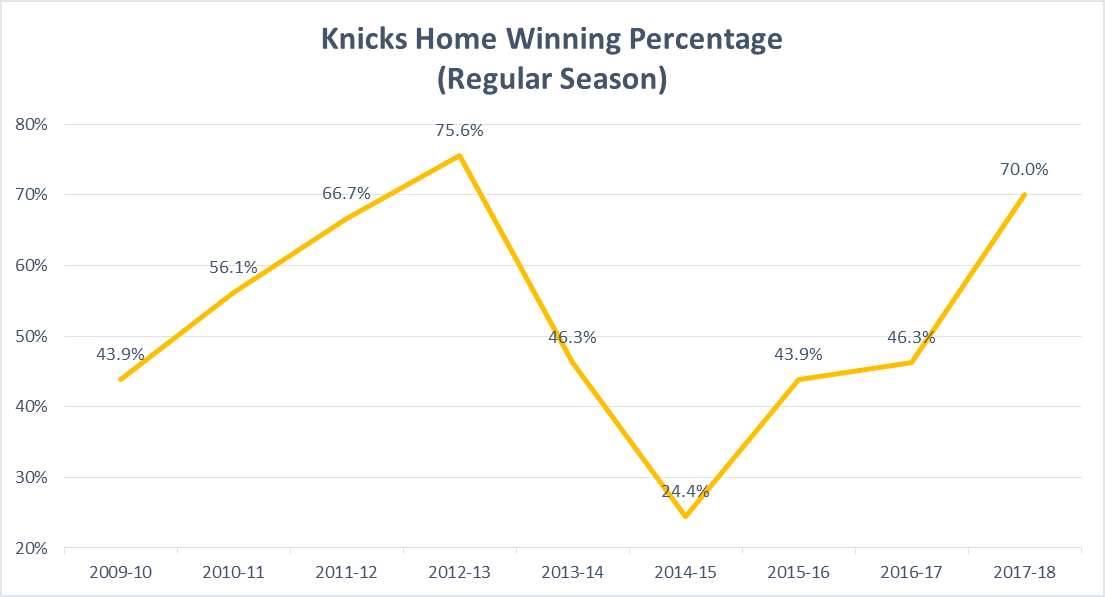 God bless that 2014-15 season. Over the course of these 8 seasons and change, the Knicks have won 52.6 percent of their home games while winning just 35.7 percent of their road games. Taking out the season in which Shane Larkin was the leading assist man and Cole Aldrich was the leading rebounder, New York has won 56.1 percent at home and 38 percent on the road. The differential between home and road wins for the Knicks is about the same as the NBA as a whole, so there’s not much to write home about there. Much like the rest of the NBA, the correlation between how good the Knicks are and how many home games they win is strong. We’ve seen them get out to these hot starts with heavily weighted home schedules in the past, but the starts haven’t stuck. The Knicks haven’t been part of the road warriors that have made that overall home-court advantage take a dive.

They were 8-6 through 14 games in 2015-16, the exact same record they have this season, which quickly became a 13-19 record as they hit the road for 11 of their next 18 games. Last season, they were 7-7 through 14 games, only to crater during December and January while winning 12 road games all season. The road struggles are real for every team, but since the Knicks have had more home games than normal, will the road beast rear its ugly head and knock the Knicks back in the standings as this season rolls on?

Time will tell. With the Knicks already banking 10 home games, they have just 31 remaining on the season, as opposed to 38 road games. From December 27th until February 22nd, the Knicks will play 20 of their 27 games on the road. That stretch will undoubtedly be what makes or breaks this season. The marquee games during that time include matchups in San Antonio on December 28th, Golden State on January 23rd, and Boston on January 31st. It won’t be easy pickings for these Knicks. Nabbing road wins over good teams is something that this team has simply not been able to do recently, but this year, they’ll have the opportunity to buck that trend.

With their 8 wins, if we assume they’ll win about 53 percent of their remaining home games, that will give them about 16 more wins, putting the projected season total before road games at 24. That could be a conservative estimate, considering that this Knicks team has a strong chance to be the best iteration of the squad since 2012-13. With the 38 remaining road games on the schedule, if the Knicks continue their road woes of the last three seasons, they’ll be in trouble. If we take approximately 36 percent of their remaining road games to be wins, they’ll notch about 14 road wins, which would leave their season total at 38. A solid number, and better than we expected before the season began to be sure, but probably not good enough to make the playoffs.

Put simply, this team will have to dig deep and win some road games against the beatable competition. Asking them to beat the Warriors and the Spurs of the world on the road is a tall task; it’s beating teams like the Magic, Blazers, and Grizzlies that will show if this team is for real or not.

Keep that December 27th date in mind, because that represents the date of reckoning for the 2017-18 Knicks.