Lonzo Ball Is a Worthy Pursuit for the Knicks 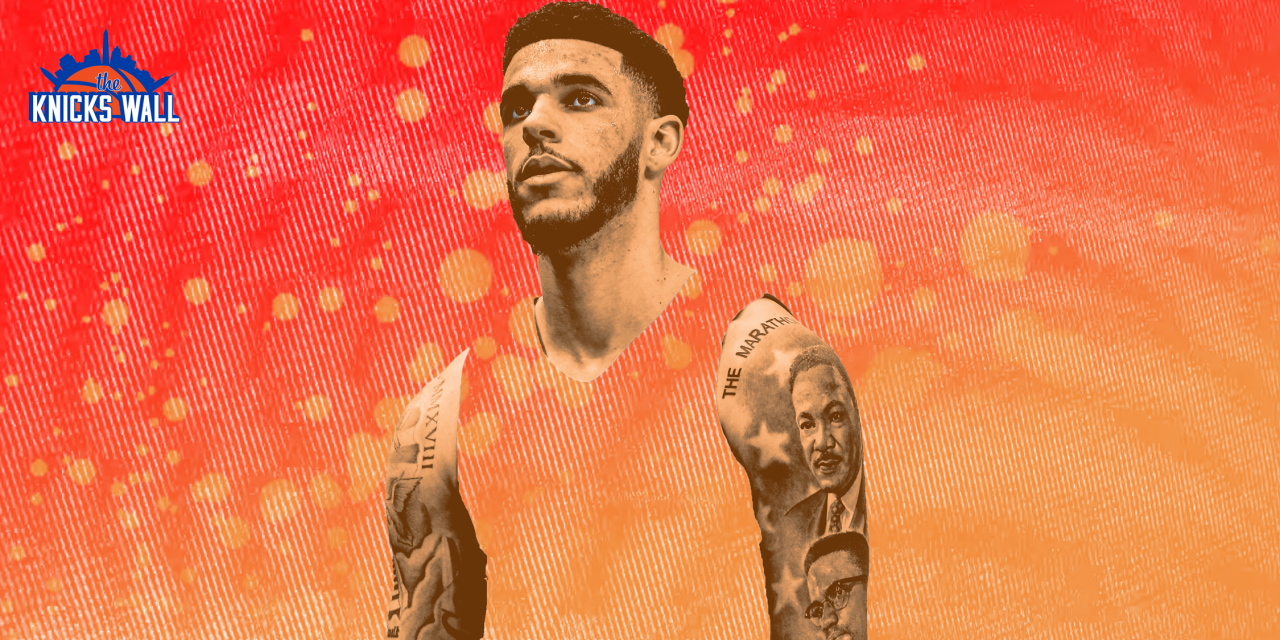 With cap space and a need at the point guard position, the New York Knicks should pursue restricted free agent Lonzo Ball.

Here we are again. Another offseason, another debate on who should be starting at point guard for the New York Knicks.

For the past two years, the Knicks have taken their medicine in regards to figuring out the position. Elfrid Payton’s greatest contribution to this Knicks team has been displaying exactly what the Knicks do not want in a starting point guard. If Payton doesn’t get a third chance to run the show, the move should be to add New Orleans Pelicans guard Lonzo Ball.

Lonzo with the lob to Zion from beyond halfcourt 🤯🤯🤯🤯 pic.twitter.com/sVB3pE8Pw0

I hate to rehash such a painful moment so soon, but it’s necessary to illustrate my points. New York’s first-round series against the Atlanta Hawks was a disaster. Although they avoided a sweep with a win in Game 2, the Knicks never quite got a hold on the game. Largely due to Nate McMillan and his staff figuring out they can play 4-on-5 on defense so long as Payton is on the court.

Julius Randle, first-time NBA All-Star and second-team All-NBA forward, worked well as the main facilitator during the regular season for New York. However, Atlanta targeted him in the playoffs, forcing him to make quick decisions with the ball and throwing different coverages at him. Even New York’s adjustment of adding Derrick Rose to the starting lineup didn’t work. Being able to immediately defer to a competent playmaker would have been huge early on.

Unfortunately, neither Payton nor sophomore standout R.J. Barrett was up for the job. For all of his improvements and shark-in-the-water mentality, Barrett is closer to a catch-and-shoot wing than a true point guard. Barrett averaged 3.0 assists per game this past season and the narrative of him being a second-half player is strong. As much as we like to think he’s up to the task, he isn’t, nor probably will ever be, ready to take on complete point-guard duties although he’s shown he’s an average facilitator at his position.

Off rip, Ball has always had a huge chunk of offensive responsibility on the court, even during the 2019–20 season when he shared the floor with LeBron James in Los Angeles. This past season he had the highest usage rate of his career at 20.5%. The Magic Johnson comparisons when he first arrived on the scene were gaudy as all hell, but he has always been a gifted facilitator. His size and court vision have always been attractive attributes, and, as he’s come into his own in New Orleans, Ball has begun to flourish as a supporting cast member.

The Pelicans are currently constructed around Brandon Ingram and Zion Williamson—a ball-dominant wing player and, well, Zion. Without getting into the particulars of their now-defunct Stan Van Gundy offense, we know that the ball was mostly in Ingram’s hands and it was his job to get the ball to Williamson and score it when he didn’t. The “Give the ball to Will” offense worked out more than it didn’t for the Pelicans, but where does that leave Ball? It left him right where he was supposed to be.

Ball did well playing off-ball this season. As the third option in New Orleans’ offense, Ball was able to score and create shots. That, and his catch-and-shoot numbers were great. Last season, Ball shot 40.2% from three on catch-and-shoot opportunities on 5.9 of those attempts per game. We can assume with Randle’s newfound glory he’ll be getting more attention next season, especially since he was exposed in the playoffs. A guard who can knock down quick jumpers next to Barrett could be crucial for next season’s success. It could have come in handy this season.

Instead, we got this:

Lack of outside shooting at point guard and center severely limited the Knicks this past regular season and proved itself to be fatal during the postseason. In a league where centers like Rudy Gobert, Clint Capela, and self-admitted spotty three-point shooter Joel Embiid get tons of shine, a center who can shoot from the outside is a luxury, not a necessity. However, a point guard who cannot shoot in this league is a liability.

Ball isn’t without his struggles, though. His past shooting woes now hold the perspective of being an encouraging sign that he’s able to grow instead of fear. Still, his inside game could use some work. In the shortened 2020–21 season, Ball only shot 62.6% at the rim on 107 attempts in 55 games. Comparatively, Payton shot 57.4% on 230 attempts at the rim. Obviously, Payton was stinking it up, but his aggressiveness means something. Yes, some of those were shots passed up from three-point looks, but when the closeouts came, he did in fact act in the most effective way. 62% at the rim for a point guard isn’t bad at all, but the low number of attempts appears indicative of a passivity.

Hypothetically, ceteris paribus, if the Knicks were to play the Hawks again next postseason with Lonzo Ball in the starting lineup, they’d have to exploit his gigantic frame. He’s 6’6” with a 6’9″ wingspan. Trae Young, at 6’0″, would be a mismatch for Ball, allowing him to take over and get some looks both on the perimeter and near the rim against him. Tom Thibodeau’s system is built around Randle’s strength, but a key component that makes it work is sharing the ball. Empowering Ball to take it to the rack, could take his game to an even more efficient, higher level.

I’m not sure what the hell was going down in LaVar’s house that led to both of them being scouted as so-so shooters yet great facilitators, but both seemed able to do both this past season. This brings us to Ball’s capacity as a facilitator, the asset that propelled him to the NBA.

The Pelicans were 10th in assists per game this past season. The Knicks were 29th. Ball only averaged fewer than 2.0 assists per game to Williamson and Ingram each on a team that had the spacing of the middle seat on an airplane. Ball still managed to average 5.7 assists to Payton’s 3.2 assists. Eric Bledsoe, Steven Adams, and Zion Williamson were in their starting lineup. Unlike the team’s sketchy assist numbers, New York ranked third in three-point field-goal percentage while New Orleans was 26th. Obviously, the improved shooting and spacing could propel the Knicks forward. The Pelicans took a few steps forward with Ball but clearly haven’t maximized his role.

Lonzo Ball we’ll do everything your team won’t do—including providing a stable coaching situation. The price for Ball’s next contract will be contentious, but with New York’s most glaring weakness being the starting point guard, signing Ball in restricted free agency is a step in the right direction. The Knicks can’t afford to have another dud at point guard next season.