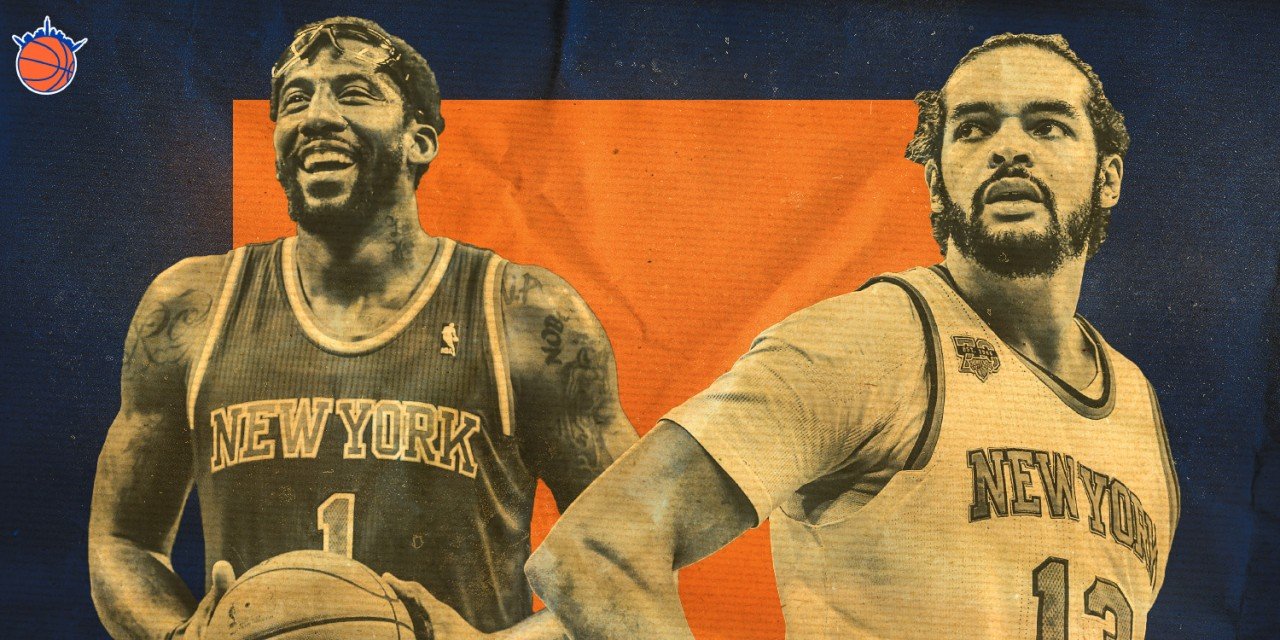 Despite a relocated business and Rich Kleiman’s dreams, Knicks fans are still rightfully dubious about Kevin Durant pulling a reverse-Kerr and actually choosing the Knicks over the Warriors—not to mention landing any other stars this summer.

For all the dysfunction and losing, the inherent advantage of playing in New York is nearly always being major players in free agency. That’s great, except the Knicks have rarely deserved closer-reserved coffee.

James Dolan has mostly kept his word and stayed out of basketball operations, and the current guys in charge are…fine. But with every scuffle with a ex-player, petty tantrum, thin-skinned ban, and anti-woke jam (among everything else), Dolan proves himself to be supremely unlikable, at least publicly. Even if Durant is already SteetEasy-ing apartments in Manhattan, every Knicks fan is wary of Dolan blowing the save.

It’s unclear how much the Madison Square Garden chairman’s behavior has directly turned away free agents. They didn’t get a meeting with KD in 2016, and were turned down by LaMarcus Aldridge (for not letting him play power forward), DeAndre Jordan, and Greg Monroe in the same offseason (2015). In 2010, they were rejected by Joe Johnson (fine with me) before losing out on LeBron James, Chris Bosh, and Dwyane Wade. Unsurprisingly, Wade said the Knicks, “just wasn’t prepared [or] ready to take on what we wanted to do…The market was there…But [from] an organizational standpoint, we didn’t feel like they could handle it.” Apparently, LeBron’s camp was also unimpressed by the Knicks presentation, and Dolan claimed that LeBron “was not engaged at all” during the meeting (they were not on LeBron’s radar in 2018). An executive told Sports Illustrated that Dolan “is and always will be the reason they don’t get free agents.”

Regardless of Dolan’s exact role in the process, the organizational ineptitude clearly doesn’t help. Carmelo Anthony—who forced a trade to New York and re-signed—said the Knicks haven’t landed a star on the open market besides Amar’e due to, “the business. Everything that was going on. The perception of New York Knicks…not basketball, but the organization.”

To be fair, there are players who have had Dolan’s back. “Fans probably don’t like him because of the team’s record and because he didn’t engage much with them. But if they knew him more directly they would probably like him more,” Enes Kanter told The New York Times. And Tyson Chandler has an understandable affinity for Dolan:

Maybe we shouldn't always rely on the public persona the media has created for people. pic.twitter.com/DlBBl1Rlac

For what it’s worth (which is nothing), Dolan is confident. During a batshit crazy appearance on “The Michael Kay Show” in February, Dolan said, “We hear from people all the time, from players, representatives…I can tell you from what we’ve heard I think we’re going to have a very successful offseason when it comes to free agents.” And he’s certainly willing to spend money; the Knicks have committed more than $800 million in payroll over the last decade. As one exec told Forbes, “New York is too appealing and they know he pays. Players are never truly friends with owners even though owners believe the players like them.”

With that in mind, and with the most anticipated free agency in franchise history fast approaching, let’s look back on their history of offseason signings (mainly focusing on the Dolan era) and see if it leaves us more optimistic or pessimistic about this coming July. In chronological-ish order:

After three promising years in Detroit on a rookie deal, Houston apparently planned to re-sign with the Pistons until he was swayed by a plane ride with Patrick Ewing. The Knicks benefited for most of that deal, as Houston made two All-Star teams and led the 1999 Finals run. But in 2001, he opted out of the final two years of his deal to re-up for six years, $100.4M in a widely derided move by then-GM Scott Layden. Houston was plagued by knee issues and retired with two years and $40 million left on the deal, prompting the 2005 Collective Bargaining Agreement to include an amnesty clause dubbed the “Allan Houston Rule.” The Knicks used the clause on Jerome Williams and ate the final two more years of Houston’s contract.

On the same day they signed Houston, the Knicks scooped up Childs. He gave them five solid years in the backcourt and provided reliable defense and occasional three-point shooting. The Knicks advanced to the second round of the playoffs every year with Childs in tow. Plus, he provided this indelible moment:

A low-key good signing, Thomas was the least flashy player maybe ever, but he was a staunch defender who started on playoff teams. Basketball-Reference disagrees, but I’m fairly certain he never missed an 18-footer. The four-year, $30 million extension with which Isiah Thomas later rewarded him is more suspect. And yes, there’s a Kurt Thomas YouTube highlight reel.

Yes, he was 40 and so utterly washed by the end of his lone Knicks season that he went scoreless in his final 10 games and promptly retired, but the 2012–13 season was easily the Knicks’ finest and most enjoyable wire-to-wire season in two decades, and Kidd was a major reason why. He shot 35.1% from deep, generated their ball movement, and didn’t even try to undermine anyone in the organization.

J.R. is silly, but he was a net positive during his four seasons in New York. He had his best year under Mike Woodson in 2012–13, posting 18.1 points per game and winning Sixth Man of the Year. He also threw down some sweet dunks. He averaged an on-brand 15.1 points per game with a 48.8 eFG% with the Knicks, and he was consistently trash in the playoffs. Worth every penny.

That’s it—that’s the end of the good section.

Weatherspoon had been respectably productive earlier in his career, but he was 31 when the Knicks outbid Cleveland for his services, with the intention of having him back up Kurt Thomas. Weatherspoon would play a little over two unmemorable seasons in New York before being shipped to Houston in 2004. He was out of the league before those five years were up.

OK, not a player, but a laughably futile arrangement. The Hall of Fame coach was fired after one 23-win season and was bought out for $18.5 million. By my calculations, he walked away with a total of $28.5 million for “coaching” the Knicks into the lottery. Also, doubly bad, because it caused Isiah to try a stint manning the sidelines.

Probably the name that jumped to your mind when you saw this article—James was a slow and limited player who averaged 5.4 points and 4.2 boards per game for his career. After a mediocre 12.5 points, 6.8 rebounds, and 1.8 blocks over two playoff rounds in 2004, Isiah threw him a wild offer. James never eclipsed 9.0 minutes per game (LOL) in New York, averaging 2.5 points and 1.8 rebounds. Knicks fans know:

Maybe the worst part about the James signing was that the Knicks gave the same deal to another non-scoring big one year later. Jeffries was slightly better (at least he was rangy on D), but was also one of the worst offensive players in the history of the galaxy (4.7 points per game with the Knicks and never once made a shot around the rim).

It’s the type of signing—an occasionally helpful role player with modest overall impact—that an organization should make when they’re a few minor pieces away from contention without using substantial resources. Filling valuable cap space for Jeffries demonstrates the confounding lack of direction or strategy that defined the mid-2000’s Knicks. Jeffries and Eddy Curry accounted for 20% of the franchise’s salary cap for the next half-decade.

It’s almost unfair to categorize this as totally “bad,” because Amar’e was great before injuries, the ‘Melo trade, and a fire extinguisher screwed things up. Plus, it is a rare example of a star player actually choosing the Knicks in free agency.

Ultimately, though, Stoudemire was paid $20 million annually and had one productive season. The Knicks should have been more wary of his injury history, but they were thirsty after missing out on the other stars of the 2010 class. Too bad.

He played fine (5.8 Win Shares) in his one Knicks season, which I utterly forgot happened until I began researching this article, but this contract was yet another example of the Knicks using cap space for the sake of using cap space—in this case after missing out on Monroe, Aldridge, and Jordan—while coming off a 17-win season. It’s the type of of signing that has Knicks fans concerned about the organization handing desperation maxes to Khris Middleton and DeMarcus Cousins (I know, Lopez isn’t on their level, but still).

The Summer of Phil—which also included a combined $75 million for Courtney Lee and Lance Thomas—was truly a masterclass in how not to spend cap space just because you have it. The entire league was on one after the cap jump, but the Noah signing was particularly fruitless, and reinforced the perception that Phil didn’t exactly have his pulse on the league. Noah was obviously on the decline at 31 and coming off a 29-game, injury-riddled season. He lasted basically one season (plus some time in exile), got injured a lot, was suspended for violating the drug policy, and fought with the coach. The Knicks will pay him $6.4 million annually over the next three years, per the stretch provision.

I don’t mind Hardaway Jr. as a player, but the first major deal handed out by team president Steve Mills was baffling from the moment it was announced.

Per Zach Lowe, the Hawks were planning to offer Hardaway something around $48 million, until the Knicks shocked everyone. This signing was made worse by the fact that the Knicks drafted Hardaway two years earlier, and overpaid a player at his position (Lee) the year before. Plus, Hardaway soaked up 18% of their cap, which prevented them from signing a point guard. He played zero defense and posted an inefficient 18.3 points per game on 48.3 eFG% in 103 contests in New York.

Obviously, the bad far outweighs the good here, and the lack of notable names on this list illustrates the Knicks’ impressive failure at wooing stars in the offseason.

Maybe this summer will be different. We’ll see.

»READ: Y2K19: Your guide to the “Knickpocalypse”