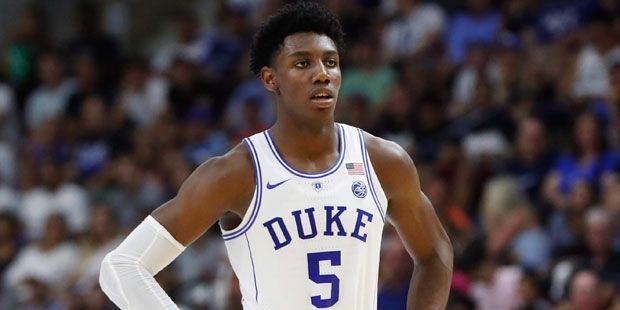 Although New York lost the top overall pick status, the NBA’s lottery bestowed the third pick to the Knicks in next month’s draft.

Despite unanimously claiming the worst record in the 2018–19 season, the New York Knicks will have the third overall pick in the NBA draft in June. New odds at the league’s lottery, held annually in May, were unfavorable to the bottom-dwelling ‘Bockers, who were bumped from the top spot given their worst record, but they would retain a pick in the top three.

The Knicks will settle with the third pick in a draft class pundits and analysts have dubbed weak relative to recent years. Duke’s Zion Williamson, the 6-foot-7 AP College Basketball Player of the Year, will certainly be off the board; he’s the consensus number-one overall pick. After Williamson, prospects like Murray State point guard Ja Morant and fellow Blue Devil swingman R.J. Barrett will have contention amid the second and third picks.

The Canadian Barrett, Williamson’s teammate, had a successful one-and-done season at Duke—often viewed as the team’s primary scoring option. The 6-7 wing demonstrated passing chops and court vision from the ball handler in the pick-and-roll, too.

Then there’s Morant. The lead guard had a fantastic season in the weaker Ohio Valley Conference but showed up in two games at the NCAA tournament against stiffer competition. Morant’s issues shooting the J may be overcome with his playmaking ability, but both Ja and R.J. are far from finished products.

There’s also speculation that New York’s first-round pick could portend to their summer plans. It’ll be a worthy free agency for the star talent team president Steve Mills is searching to equip his team with. Kevin Durant, Kyrie Irving, Jimmy Butler, Kemba Walker, Kawhi Leonard, and Klay Thompson are among the premier all-star players who could be available to wooing teams in July. Should one or two of those max-level contract player find the Big Apple a suitable destination, and the Knicks have caught wind about such plans, the team could use their third pick accordingly, whether that’s drafting a complementary player or trading down to pick a lesser prospect while hoarding future assets.

Falling to three significantly reduces the Knicks’ chances of trading for disgruntled Pelicans power forward Anthony Davis. It was reported that a top-two selection in this year’s draft would be a palatable centerpiece for New Orleans in a potential trade. The Knicks are likely to select the remainder of Morant and Barrett at three, though Texas Tech guard Jarrett Culver will likely be considered by the team.

New York has now fallen or stayed put in the draft lottery in each drawing since 1986, the year after the team won the lottery and acquired Georgetown center Patrick Ewing with the first overall pick.

Despite a scare when the Lakers jumped into the top four of the lottery, the Knicks remained steadfast in the top three, while teams like the Cleveland Cavaliers and Phoenix Suns fell to five and six, respectively.

Full lottery results are found below:

»READ: How the Knicks’ first-round pick alters their timeline