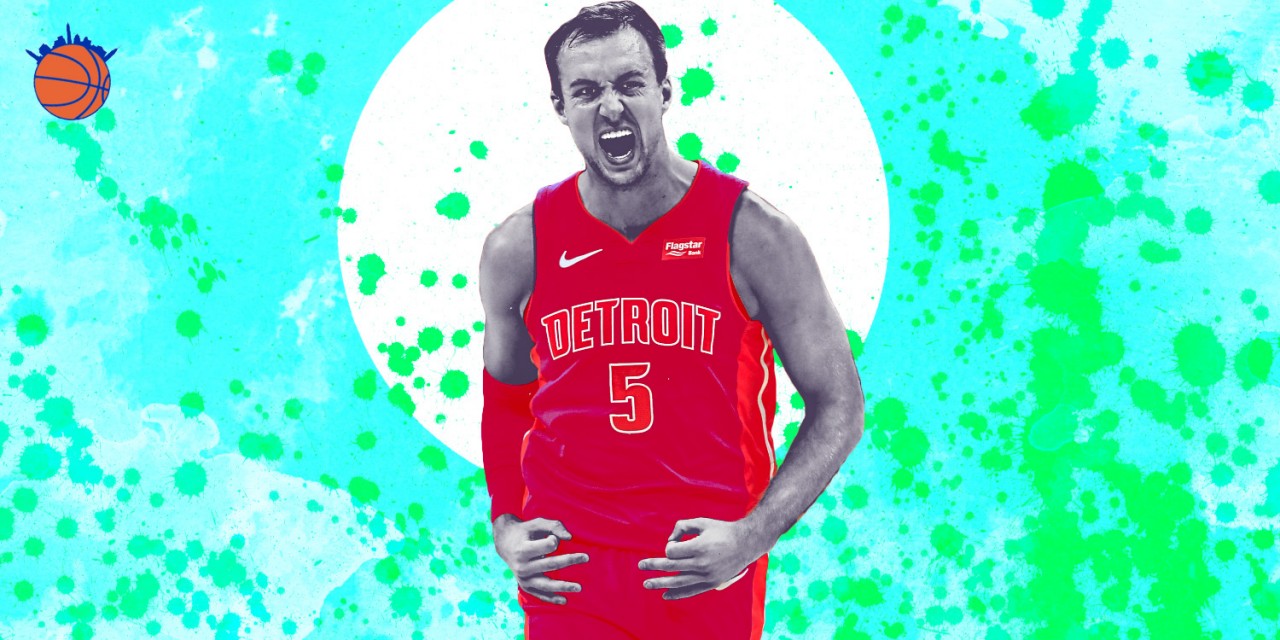 Pistons swingman Luke Kennard is a young and accurate three-point shooter who fits well as a Knicks trade target given their rebuild.

With R.J. Barrett and Mitchell Robinson on the roster, the next step for the New York Knicks will be to maximize both players on both sides of the ball. After an offseason of lackluster short-term moves, the Knicks must head into this upcoming offseason with a directive of prioritizing fit around their two young players.

Part of that upgrade will be the point guard position. Between never-ending Chris Paul rumors and the dearth of point guard options in this class, the Knicks will have plenty of options to fill that need. The other need will be spacing and shooting around their two young building blocks. This season, the Knicks ranked 27th in three-point percentage and 29th in three-point rate. Despite adding several shooters, the Knicks struggled to convert on threes.

The Knicks could, again, try to address this need in free agency with players like Brooklyn’s Joe Harris or Sacramento’s Bogdan Bogdanovic. Or, they could look in the draft, where the likes of Florida State’s Devin Vassell, Villanova’s Saddiq Bey, or Vanderbilt’s Aaron Nesmith could all suffice. If they were to look towards the trade market, the name that creates the most intrigue is Detroit Pistons swingman Luke Kennard.

Kennard is a 6-foot-5 wing, drafted 12th overall in 2017. Overshadowed by the likes of Donovan Mitchell, who was selected one pick later, Kennard took a bit of time to develop early in his career, before taking a significant leap this season (15.8 points, 4.1 assists, 3.5 rebounds).

Kennard’s shooting should be of interest to the Knicks. This season, Kennard is shooting 39.9% on 183 three-point attempts this season. It’s not just the pure shooting that attracts but the different forms of shooting. Not elite in any particular shooting area, Kennard has had success as a spot-up shooter and also as a catch-and-shoot threat (42.2% on 3.6 attempts per game), despite the lack of talent around him for much of the season.

One area where we’ve seen Kennard improve is his creation. At Duke, Kennard averaged 2.5 assists and an assist rate of 13.6%, but it didn’t appear over the first two NBA seasons. This truncated season, however, Kennard has taken a larger role as an offensive creator, averaging 4.1 assists and sporting an assist rate of 19.2%. Even if he isn’t a consistent four-plus assist per game player, that slight evolution in his game would work wonders for a team that needs both team and self-creation.

And the intersection of creation and shooting is pull-up shooting. Among players averaging 30 minutes and shooting 2.5 pull-up three-point attempts or more this season, Kennard shot 37.1% from three—good for sixth in the league. It would be worthwhile to see if Kennard can maintain that shooting on more attempts per game. (Among the top 10, only Marcus Smart has fewer attempts among that criteria.) While Kennard’s skill set appears appealing because of his ability to thrive off the ball, it could be his budding on-ball skills that could help his career turn a corner.

There are some weaknesses, though.

Kennard is a poor defensive player, due to a lack of foot speed and size. At 6-foot-5 with a 6-foot-5 wingspan, Kennard is at best someone to throw on point guards or the weakest perimeter player on the floor. Combine those defensive issues with injury issues (he only played 28 games in 2019–20, due to knee injuries) and there are concerns as to whether Kennard can be a starter on a winning team or not, even with his offensive upside.

But when you consider Kennard’s shooting and creation, he makes for an intriguing trade piece. Elite shooters who can handle have higher floors than just straight shooters. Kennard’s ability to work and operate a pick-and-roll allows the Knicks to put a variety of different players on the floor with him, while also doubling as a near 40% shooter.

How much would Luke Kennard cost the Knicks in a potential trade?

The honest answer: it’s tough to say. The Pistons and Phoenix Suns had conversations prior to the trade deadline involving Kennard to the Suns with a draft pick heading back Detroit’s way. Eventually, that talk fell apart due to the snag over protections for the pick returning to Detroit. With very few assets on the roster, the Pistons could view Kennard as a key piece in a potential tear down and that could come costly.

However, the Knicks have several first-round picks available, and while the talk is often using said draft picks to acquire a star, they could also be used to add a player like Kennard, who could be on the way out from another team. While an unprotected pick feels like a hefty price for Kennard, the Knicks could enter negotiations with several draft picks and protection options over the next three seasons.

New York should jump into the trade market. With seven first-round picks over the next four years, the market for adding talent doesn’t stop at just the draft and free agency. The various opportunities to flip a draft pick for a proper fit are there. At 23 years old, Kennard is an elite shooter who also added more creation to his game this past season.

While Kennard doesn’t profile as a star player, he’s a perfect fit alongside R.J. Barrett and Mitchell Robinson, and gives them the shooting needed to help space the floor, create some shooting gravity alongside them and fits New York’s age range for development. In prioritizing fit over names, Kennard would be a trade target that fills numerous holes on the roster, while also offering someone who can grow and improve with their young talents.