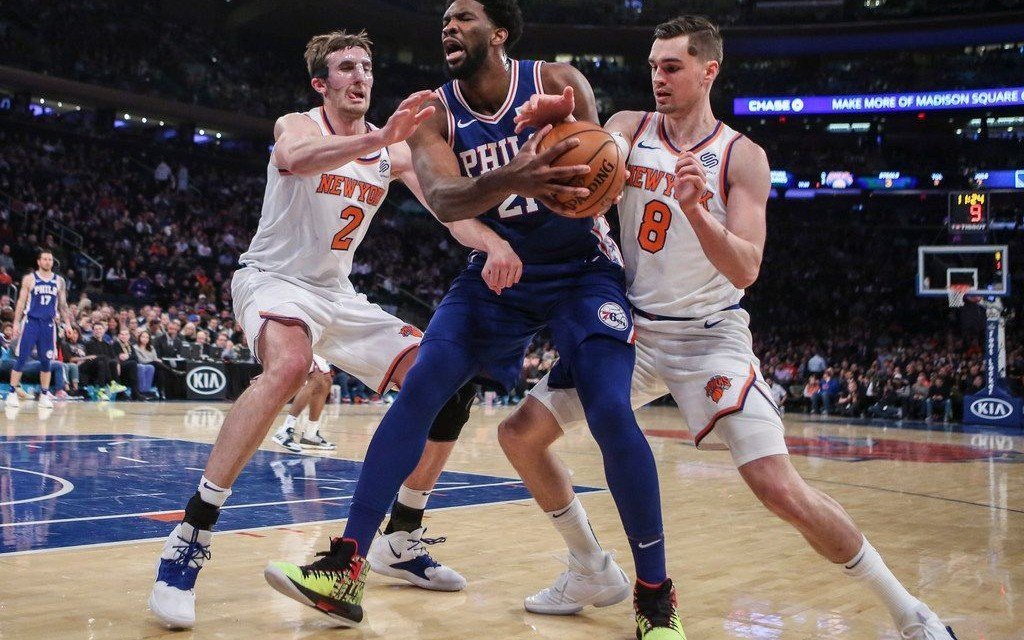 Chalking up Luke Kornet and Enes Kanter’s respective strengths and weaknesses draws a stunning illustration of how the New York Knicks could best operate going forward.

When the Knicks waived Ron Baker earlier this season, Luke Kornet became the guy who was constantly getting hit in the face. But that’s not the only role the 23-year-old big man has filled for New York.

Kristaps Porzingis isn’t expected to return to the court until at least February, if at all this season. This year is all about getting the Knicks’ young talent ready to play alongside Porzingis. However, they came into the season with starting a center who couldn’t be more different from their franchise player.

Porzingis’ ability to stretch the floor at one end and protect the rim at the other is an integral part of his game. Enes Kanter, the Knicks’ starting center on opening night, is strong enough to hold his own with anyone in the post and has two 20-20 games, but his skill sets could not be more different than that of Porzingis.

Conversely, Kornet plays like a very poor man’s Porzingis. Head coach David Fizdale inserted Kornet into the starting lineup on Dec. 27th against the Milwaukee Bucks. Kanter wasn’t happy about coming off the bench, but Kornet matched a career-high 23 points, hitting 7-of-11 from the field.

The Knicks lost to the Bucks, but after the game Fizdale said that starting Kornet gave the other players room to work on offense. “He opened up the floor for us to be able to attack the paint,” he declared.

While Kanter will put up big numbers, having him hang out on the elbow doesn’t do much to space the floor for others. He’s taken 20 threes this season and hit seven—an improvement over last season, when he shot only two three-pointers—but defenders have no reason to respect him when he’s behind the arc.

Kornet, on the other hand, has made 6-of-20 threes over the last four games alone. Centers can’t just camp out near the paint when he’s on the floor. Kanter’s box scores may look better after repeatedly calling for the ball in the post every possession, but Kornet’s range makes him move valuable to a developing team in 2019.

This is exemplified by how rookie Kevin Knox performs with both Kanter and Kornet. Knox scores over 35 percent of his points in the paint and greatly benefits from the spacing Kornet brings to the court. Rim-protecting centers have to hedge out towards the arc when Knox plays with Kornet, instead of lurking down low looking to contest his shots like when Kanter’s in.

It’s no coincidence that Knox had a career-high 31 points against Philadelphia on Jan. 13 when Kanter sat out after eating seven hamburgers.

Defensively, Kanter can guard his own man in the post and his rebounding ability is important in limiting second chance opportunities. But there’s a reason why opponents say, “Pick n roll at 00 every time.” He’s in his eighth season, but Kanter makes the same sort of mistakes that rookie Mitchell Robinson does and lacks the length and explosiveness that allows Robinson to recover.

Neither player will ever be Hakeem Olajuwon. Both have Defensive Ratings of over 110 points per 100 possessions. However, Kornet’s shooting gives the Knicks enough flexibility on offense to justify his liabilities on defense. In today’s game, you have to be able to shoot or defend—preferably both—and Kanter does neither.

Unfortunately, the NBA has passed Kanter and his skill set by. He still has a place in the league, not as a starter as he clearly wants, but as a specialist. Come off the bench, grab rebounds, get put-backs and if they’re running him off the floor on defense, then pull the plug.

He’s more talented than Kornet, but that doesn’t mean he’s the right player for the Knicks this season. Kanter is a free agent at season’s end. Kristaps will be back by the start of next season. Slotting in the stretch five and allowing their young players to get used to playing with a Porzingis-like player makes the most sense.