Making the Case for Feron Hunt 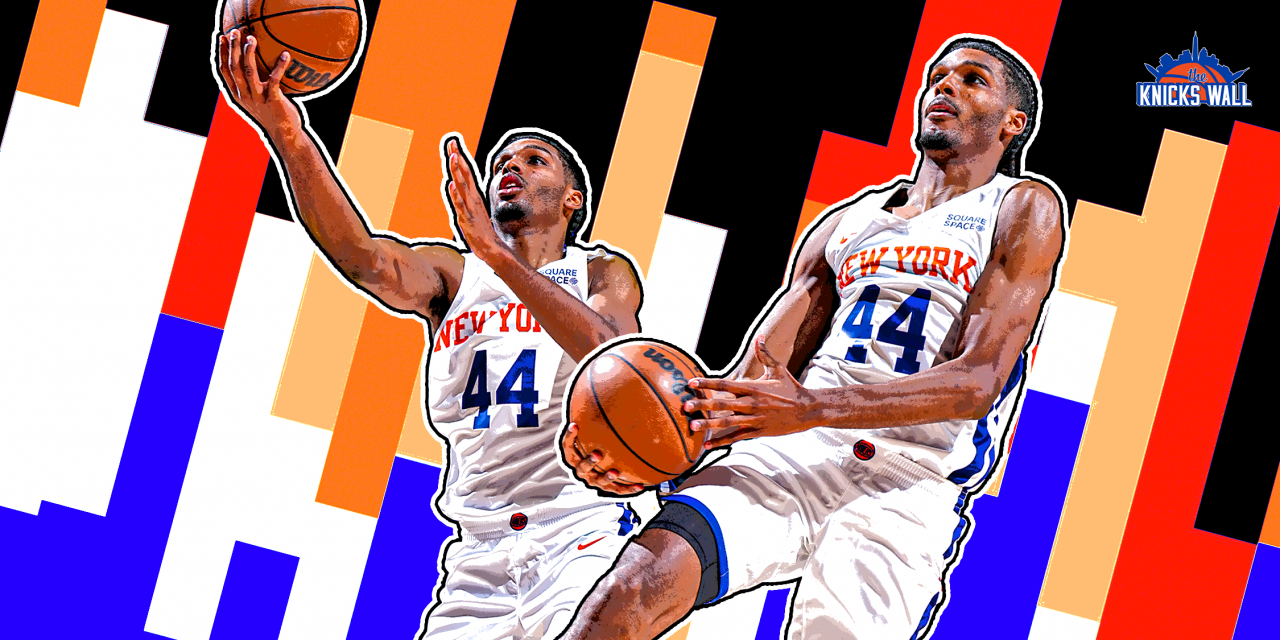 Feron Hunt is not widely considered a core Knicks young prospect, but could he be changing that impression?

Feron Hunt is a name that few Knicks fans would have been familiar with prior to this Summer League, but if the first couple of performances in Las Vegas are any indication, that could change in a big way. The 23-year-old wing has had a successful season for development in the G-League after going undrafted out of SMU. If you are a fan of the Westchester Knicks or the Texas Legends, you may be familiar with Hunt for his ferocious dunking ability and elite athleticism.

The 6′ 8″ wing is going to get the most attention for his thunderous dunks from all places and angles on the court. There is a good reason for that, as he has shown not only a fearlessness but a true thirst for blood at the rim. It is easy to imagine why Knicks fans may be enamored by that elite athleticism. It is as functional as it is fun to watch with his buckets coming from back cuts and lobs, as well as transition opportunities and getting downhill after attacking closeouts.

The third dunk is ridiculous pic.twitter.com/ilk1vuD6rr

The idea of an athletic wing off the bench is an appealing thing when looking at the current construction of the Knicks roster. While Obi Toppin may already fill that role and also have the role of Athlete On The Bench fans clamor for Thibs to play, Hunt could potentially be a wing version of that in a smaller role on the bench.

He brings a skillset that would benefit the Knicks as a potential role player. Offensively, he averaged 18.1 points a game in the G-League and shot nearly 38% from beyond the arc. While his scoring ability is not to translate at the next level, the way he scores is. If you look at his 17-point performance in the Knicks Summer League debut, it came in ways that would help the Knicks at the highest level.

Feron Hunt will not be a high-level scorer in the NBA, but if he is able to continue shooting at that near 40% three-point clip, it makes him valuable as a potential 3-and-D player and separates him from someone like Obi Toppin, who is a 30% career three-point shooter on 1.9 attempts per game.  The former SMU Mustang never shot better than 27% from beyond the arc in his three years in college and that was always on less than two attempts per game. The growth he has made offensively since college shows a high level of development for the young prospect. He is barely 23 years old and went from shooting only six shots per game in college to taking 13 attempts per game in the G League.

It's SHOWTIME in Vegas! 🚨

Easy baskets are always a good thing and somebody that can create them with athleticism and smart movement has the makings of a productive role player. While Hunt may not be able to create off the dribble as he has in Summer League or the G-League, he should still be able to finish at the rim, especially in transition.

It remains to be seen the level to which Hunt can be a contributor at the NBA level, considering he did not score a point in either of the two games he laced up his Nike’s for last season, but his transition scoring gives plenty of reason to hope. He is a highly active player, and when you compound that with his natural athleticism, it creates a lot of easy buckets and some showtime dunks.

Feron Hunt with another steal with his long arms and finishes with the euro step in the lane in transition. pic.twitter.com/ku2kuV00Iu

The biggest reason that he is able to get as many transition opportunities as he does is because of his defense. As active as he is in transition, he is even more so on defense. He has energetic hands and does a great job of cutting off passing lanes and disrupting offenses. This leads him to generate steals at an impressive clip, as well as creating turnovers for his teammates that he can get out ahead of for easy dunks. He is the first player in Summer League with ten steals, with an astounding seven steals in his debut and three in the follow-up performance. As well as the gaudy individual defensive numbers he has put up in Summer League, he has been a major part of a stifling Summer League defense that must have Tom Thibodeau smiling.

The second-year wing could potentially help the defense off the bench as another on-ball defender, but even more so as a plug-and-play option for Thibodeau as a solid team defender, something they were not getting from guys like Evan Fournier.

Feron Hunt may feel older as a three-year college player with a year of G-League experience on top of that, but he is younger than “Knicks Kids” Immanuel Quickley and Obi Toppin. It is important to remember that he could develop with opportunities as well. While it is unlikely that he would crack Thibs’ rotation, he could be a solid reserve or backup in case of injury or safety protocols with room to grow over time.

He has the natural athletic ability to develop on both sides and keep improving into a 3-and-D role player who can help the defense and feast in transition with his show-stopping dunks. The Knicks brass believed in him enough to give him a two-way while players were out with Covid last year, and we will see if that trend continues. He has been given plenty of opportunity and time on this very successful Summer League roster along with the players that Leon Rose and Company have spent their heavily-valued draft capital on, and he has proven that is the right choice.

Feron Hunt throws a down a dunk so tough James Wiseman had to stop mid sentence pic.twitter.com/oBjMtYSdrh