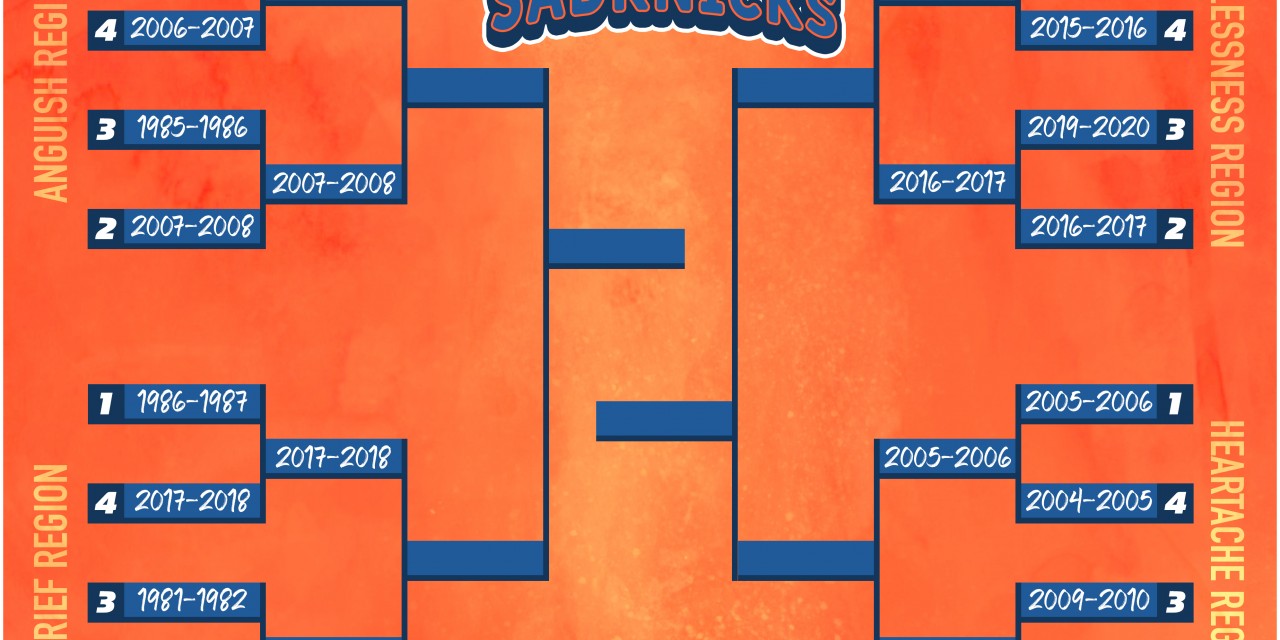 We saw two upsets in the first round as Eli Cohen recaps Day 1 of March Sad Knicks and we head to the Elite Eight of the “competition.”

After a thrilling first day, we’ve officially reached the Elite Eight of March SadKnicks. We had drama, heartbreak (as is befitting a Knicks tournament), and a couple upsets, which mostly seem to indicate that not many people watching the Knicks in the ’80s voted. But time waits for no man, and neither does March SadKnicks! So, let’s take a look at what Round 2 will have in store.

No surprise here, the 2018–19 powerhouse Knicks steamrolled their simply regular-bad 2006–07 competition, and it’s no surprise. Stephon Marbury’s presence alone made the fourth seed a better, more entertaining team than their franchise-worst foe.

The one-seed will face off against a similar, yet much worse group of faces as they go up against the 2007–08 Knicks. Out go Channing Frye, Steve Francis, and Kelvin Cato, and in come Zach Randolph, Fred Jones, and rookie Wilson Chandler. Marbury’s decline by now has started to reach warp speed and even the blind can see Isiah Thomas’ time has come to an end.

Can the overall lack of talent and franchise record for fewest wins beat out the dysfunction of the Isiah Thomas Knicks?

They go on to face the 2016–17 Knicks in an absolute clash of the titans. On one hand (2014–15), we have the last honest effort to build a contender around Carmelo Anthony—and the agony of that chance being squandered on Andrea Bargnani. On the other, we have possibly the most toxic Knicks season since 2007–08, one where team president turned on star player, fans turned on the team (AND the team president), and everyone in general just had a bad time.

They say time heals all wounds, and maybe that’s why the 2017–18 Knicks were able to pull off the major upset against the first seed 1986–87 team. The memories of KP’s injury are still fresh, as is the loss of our first drafted All Star since Ewing, and the paltry return we have to show for it. Regardless of how you feel about that trade and how it altered the direction of the franchise, it’s going to be many years before the wound heals fully.

In a fitting battle of ACL injury vs. ACL injury, the 2017–18 team will face off against the two-seed 1984–85 team. If day one has taught us anything, it’s that recency bias is alive and well, so there’s a good chance the Cinderella story will continue for our beloved underdog four-seed. The only thing that could swing it is which season highlights balances out the sadness more: Porzingis’ All-Star season or Bernard King’s scoring crown?

One of our strongest no. 1 seeds in the tourney, the 2005–06 squad checks off all the major terrible-Knicks boxes: a short-sighted trade that would hamstring the team for years (Channing Frye trade), overpaying bad centers (see: entire roster), a coach fired mid-season, and random, washed-up former stars (Penny Hardaway).

But the three-seed 2009–10 squad is not much less formidable, boasting their own washed-up star (T-Mac), missing out on a generational player in the draft (Stephen Curry), an over-paid role player who’d never play for them (Cuttino Mobley) and a bad high-draft pick European (Darko Milicic). This one could be a match-up for the ages.

Get your votes in now to see how the Elite Eight shakes out. Every day takes us one step closer to anointing the worst of the worst.