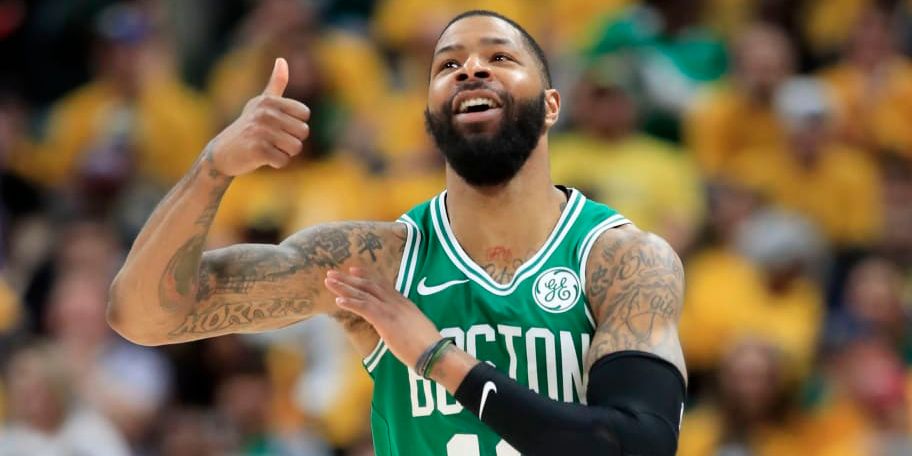 The Knicks ink power forward Marcus Morris to a premium $15 million contract that only runs for next season after he spurned the Spurs.

Free agent forward Marcus Morris has agreed to terms to a one-year contract with the New York Knicks worth $15 million, per The Athletic’s Shams Charania.

Adrian Wojnarowski of ESPN reported the San Antonio Spurs pulled their offer for Morris, a 6-foot-9 power forward coming off a two-year stint with the Boston Celtics. Earlier in the week, ESPN reported Morris was re-considering his options with the Spurs, who had expected to sign the 29-year-old to a multi-year deal, and in conjunction with the move, traded Latvian forward Davis Bertans and restructured a contract with veteran forward DeMarre Carroll.

Cap space became available for New York after it was discovered during the team conducted a routine physical with free agent wing Reggie Bullock, who they verbally agreed to a two-year deal worth $21 million, that a medical issue existed, possibly preventing Bullock from competing in the upcoming 2019–20 NBA season.

The Knicks and Bullock’s side are still negotiating a potential deal, albeit with a smaller financial guarantee for the 28-year-old. Thus, in Bullock’s absence, the ‘Bockers were able to come to terms with Morris on a $15 million deal. SNY’s Ian Begley added the Knicks still expect to reach a deal with Bullock.

Forward Marcus Morris tells @TheAthleticNBA @Stadium on reopening his free agency and signing with the Knicks on a one-year, $15M deal: “I had to make this decision based on the best situation for me and my family. This is no knock on the Spurs. I have respect for them.”

Morris is an eight-year NBA veteran and twin brother of current Pistons forward Markieff Morris. Nicknamed “Mook,” the University of Kansas product declared for the draft in 2011 and was selected 14th overall by the Houston Rockets. Morris would later play in Phoenix for the Suns with his brother before stints with the Detroit Pistons and the Celtics.

The question of Morris’ position has come into question since the emergence of the possible acquisition following the Bullock news. Morris has played his best basketball as a power forward and stretch 4; however, the Knicks appear to have a laundry list of potential power forwards after an offseason where general manager Scott Perry inked Julius Randle, Taj Gibson, and Bobby Portis to deals. Additionally, 19-year-old former lottery pick Kevin Knox could learn a thing or two from maximizing his plus shooting and frame and playing the 4. It will be a difficult task for head coach David Fizdale to manage the minutes of up-and-coming prospects on the team alongside expiring contracts of veterans.