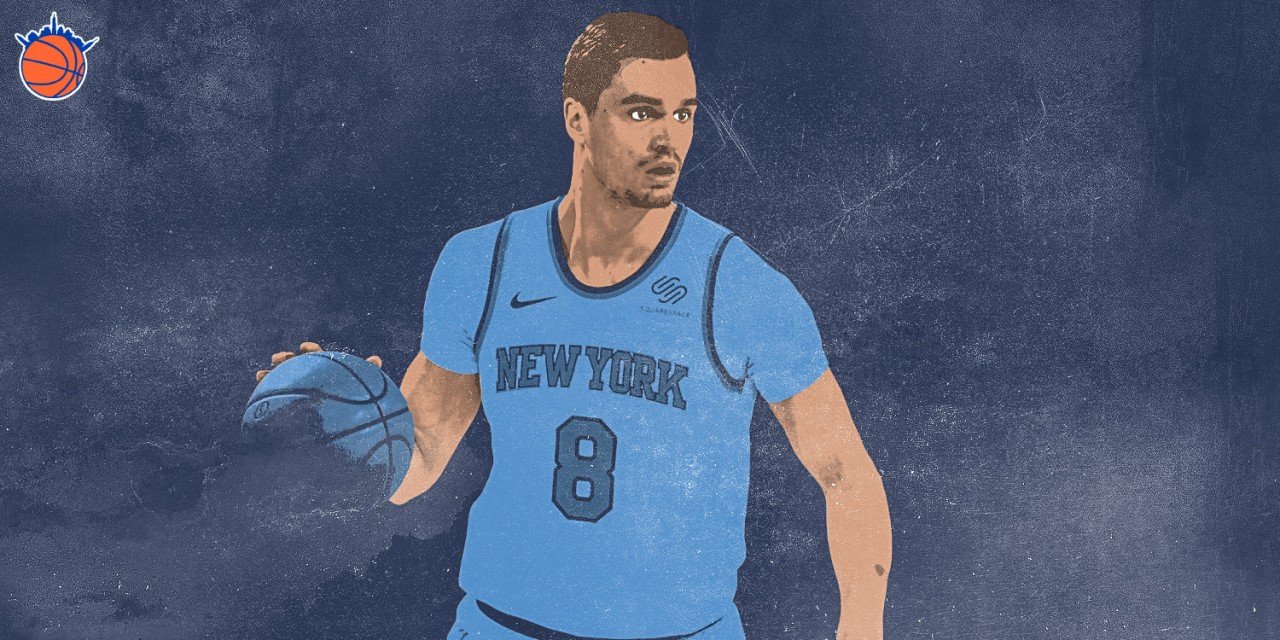 Mario Hezonja’s first season with the Knicks could be his last one, but that doesn’t diminish the achievement of Hezonja earning “garbage time legend” status.

As Knicks fans, we tend to think about the silver linings after every unsuccessful season—which also tends to be every season coincidentally.

Even intended tank seasons have led to draft picks disappointingly lower than fans had hoped. Now, with enough young talent, the mid-season hopes don’t solely lie in the end-of-season draft but reside in the young players’ development.

Despite the iffy projection of said young players’ development, there remains one light in the darkness: the consistently inconsistent phenomenon that rallies horrendous teams to almost epic victories during the throes of their season-long suck-spree—it’s garbage time.

And this year’s garbage time legend was no other than the Croatian Kobe, Mario Hezonja.

The Makings of a (Garbage Time) Legend

Yes, garbage time legend, the title bestowed upon players who shine under the most daunting of circumstances yet crumble every other night. Garbage time legends tend to be, almost literally, shooting stars—arriving at All-Star level but only in fleeting moments during the most bleak of conditions.

Hezonja, 24, isn’t quite a legend yet. He’s got enough time to make something more of his career than an afterthought among the pantheon of great NBA players. As funny as the title “Garbage Time Legend” is, the players in this class are legitimate ballers, kinda.

For better or for worse Hezonja is in meh company.

If there’s anyone who deserves Garbage Time Legend status, it’s the one and only Joe Cool. A seven-time All-Star, Johnson lived up to his name by playing to his strength of volume shooting. Iso Joe was a decent facilitator at his best, and never gave anyone too much grief on defense, but at one point he was deadly from long-range.

Unfortunately, his game never aged too well, specifically because of his penchant for mid-range shots. The long twos have aged even worse. For his career, Johnson shot 38.9% on attempts from 16 feet out to the three-point line. Those attempts count for 22.1% of his total attempts, and accounted for his highest frequency shot.

In other words, Johnson took his worst shot the most.

But don’t get me wrong, Johnson was no slouch: He shot 37% from three for his career and had three seasons where he shot above 40%. However, his sky high usage rate peaked in his first All-Star season with the Hawks at 28.3. That kind of play during Johnson’s peak led to a slew of first- and second-round exits. Iso Joe stans can cry out the refrain, “he needs more help,” but if the likes of Al Horford, Jamal Crawford, Jeff Teague, and cashing checks king Josh Smith aren’t enough, there’s not too much more to say.

To solidify his rank as the patron saint of Garbage Time, Joe Johnson began the twilight years of his career in the “Totally Washed Era” of the Brooklyn Nets with a hobbling Kevin Garnett. His final big payday of $11 million was earned in 2017 for the Utah Jazz.

Admittedly, he played alright in his role as a veteran on a surprisingly successful young team. Turns out, Iso Joe did learn some things from his garbage time days.

Former Knick Michael Beasley’s been doing this for a long, long time.

Currently hooping in China, Beasley’s had a storied career already—though not all the stories are “good.” Nevertheless, he’s lived up to his name as The Walking Bucket since he first stepped foot in the league.

A Kansas State University alum, Beasley came out of the gate with established scoring chops. Over his first two seasons he averaged 14.3 points and shot 46% from the field. Beasley was poised to be a force in the NBA with such a strong start. Unfortunately, the two back-to-back first-round exits merely foreshadowed the futility of his career.

Beasley meets all the criteria for Garbage Time Legend: He’s got a sky high usage rate, sitting at 26.9% for his career. That’s higher than Kyle Lowry, Chris Paul, and Jrue Holiday. You know, floor generals who actually run your offense. Michael Beasley holds the ball like a running back.

He’s got a penchant for long mid-range twos: For his career, he’s taken 24.8% of his shots between 16 feet and the three-point line while making only 40.7% of them.

Shoots from a place less than ideal? Check. Hands stuck to the rock like glue? Check. (Beasley’s averaged two assists only once) Unshakable confidence? A man who calls himself The Walking Bucket is more attached to that confidence than his own name. It’s stitched into his soul.

It’s a shame the Los Angeles Lakers didn’t embrace Beasley’s nature during his augmented minutes following LeBron James’ injury. Beasley could have provided enough lift to keep the team afloat in James’ absence, or, at the very least, given the league some very entertaining #BeasleyGames.

As of this writing, Beasley’s NBA career is on the brink of death. He’s been a part of four first-round exits and six teams that didn’t qualify for the playoffs in his 11-year career. Don’t sleep though—Beasley’s been to the finals (and played 23 minutes in it).

Carrying the torch of his forebears is the Croatian Kobe, Mario Hezonja.

All the hype that evolved into expectations at the start of his NBA career obviously didn’t do him any favors. Plus, it gets kind of sad when you realize that he was the guy projected to be Luka Doncic before Luka Doncic.

However, the tragedy doesn’t start here, at his current crossroads. It began during his rookie campaign where he immediately took more long mid-range jumpers than he should have. As a first-year prospect, not averaging double digits in points is a disappointment, but no one dares consider the rookie an abject failure for failing to reach the arbitrary benchmark. Alas, as time passed, his assists remained low, his shooting numbers stayed mediocre, and his position changed partially due to an obvious inability to guard quicker, smaller players. After his fourth season in the league, Hezonja has yet to crack averaging 10 points per game.

The question about his career shifted from “how good can he be?” to “is he any good at all?” during his tenure in Orlando. It didn’t happen overnight. Over his first three seasons with the Magic, he only tallied seven 20-point games. His career stats are currently 7.3 points on 41.7% shooting, 1.3 assists and 3.0 rebounds per game. He’s taken 41.3% of his shots from three and made 32.1% of them.

Hezonja’s role, above all, was to be a scorer. Bad defense? Some schemes can hide it. A lousy rebounder? Emphasize that aspect for the big men around him. But if you’re supposed to be a scorer and you’ve got the shooting numbers of a Stormtrooper, you’re useless to your team.

And that’s what led him to New York. Most of the time it appeared as though Hezonja’s garbage time minutes would never come, since rookie Kevin Knox was playing over 40 minutes a game. Hezonja’s stroke of luck came when the Knicks’ point guards all were unavailable due to injury or illness. His greatness commenced with his reign as the Knicks’ starting point guard.

The first of Hezonja’s marvels came against the Milwaukee Bucks, as he courageously avenged his teammate Tim Hardaway Jr.’s honor after being posterized by Giannis Antetokounmpo in the previous season. The Greek Freak cleared Hardaway Jr., rendered as a track and field hurdle, for a humiliating slam. It probably haunted poor Timmy, until that fateful day when Hezonja was hauling ass down court for a fast break dunk and inadvertently caught a 6’11” body in the process.

The subsequent Step Over, an homage to Allen Iverson’s Step Over on Tyronn Lue in the 2001 NBA Finals, made the poster all the more disrespectful. Ending the game with a Knicks victory eliminated any chance of an asterisk being put on the dunk. Notably, those were Hezonja’s only two points of the game.

Hezonja was quiet for quite a while—that is, until March 17, 2019. By that point the Knicks were mathematically eliminated from the playoffs. It was like this irrelevant factoid transformed a mostly impotent garbage time player into the garbage time Super Saiyan. His reign truly began when he freaking blocked LeBron James on a game-changing possession, winning the Knicks the game.

Giannis and LeBron are titans in the league, and he took them out with the smug confidence he had since day one in Orlando.

Another addition to his legacy is notching a triple double in his first game as the Knicks’ starting point guard. It was like he was Beowulf or Hercules, accumulating legendary feats as the mythos surrounding Hezonja grew. In his final five games, Hezonja averaged 16.6 points on 49.2% shooting, 7.6 rebounds, and 5.4 assists with 4.2 turnovers. The ball was in his hands often, and he was quite at home with a 23.7% usage rate.

Hezonja’s struggled to carve out a role for himself in the NBA and was looking at the end of the road. While being a Garbage Time Legend doesn’t sound like the most prestigious of titles, it’s better than nothing. Super Mario has got a lot of basketball left in the tank, and the tank appears to be just where he belongs.