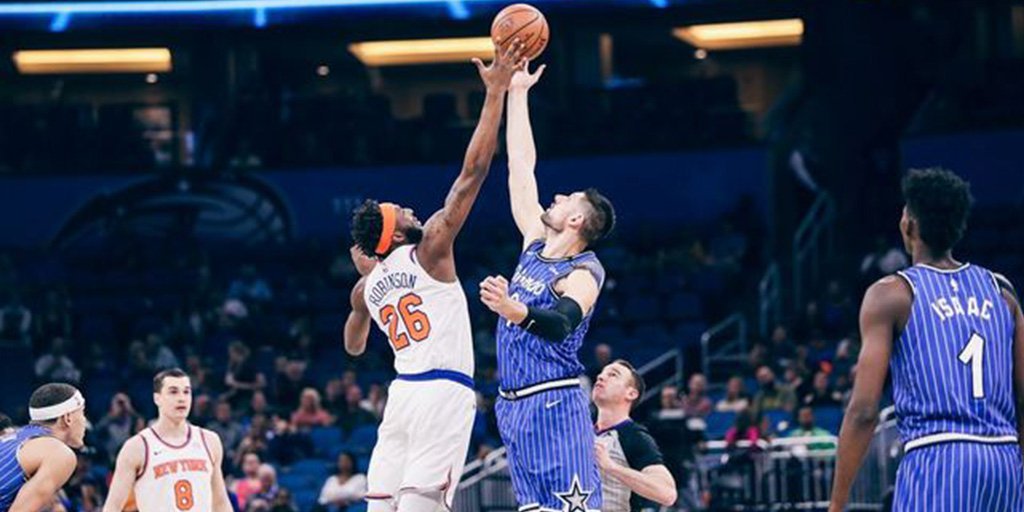 Mario Hezonja scored a new career high against the team that drafted him, the Magic, but the Knicks fell short on the first of two road trip games.

The New York Knicks (15-63) lost their last game to the playoff-hunting Orlando Magic (39-40) behind strong play from Nikola Vucevic, Evan Fournier, and Terrence Ross, because every nobody has a great game like when playing against the Knicks.

Here are the key notes for the Knicks.

Mario Hezonja returned to Orlando and played his heart out to score a new career high of 29 points before fouling out late in the fourth quarter.

The Knicks lost their double-digit lead just as quickly as they gained it, but Hezonja’s scoring kept the Knicks within striking distance throughout the game. He ended the game shooting 50% with nine rebounds and five assists as head coach David Fizdale gave the former fifth-overall pick the nod at power forward against the team that drafted him.

Rookie Kevin Knox came out aggressive and confident versus the Magic. Scoring seven points in the first quarter was a good omen for the 2018 first-round pick. Using his length and athleticism he shot well from the field, free throw line, and beyond the arc.

He’s looked like more of a pro in this most recent stretch. The University of Kentucky product appears comfortable in his role and could close out his rookie season on a really high note if his efficiency remains at this level.

Mitchell Robinson’s streak of two or more blocks per game was extended on Wednesday night to 26 consecutive contests.

The starting center began the game on a tear along with fellow rookie Kevin Knox, accounting for the Knicks early lead. Big Mitch ended the game with 12 points, nine rebounds, one block, and three steals.

His steal on a foolish Aaron Gordon and subsequent fast break dunk was the highlight of  the night for the Knicks.

MITCH WITH THE STEAL & STUFF pic.twitter.com/YTBR4r4WYH

Number of the Night

55-31: The Knicks were out-rebounded 31 to 17 in the first half.  Sorely missing center DeAndre Jordan, Luke Kornet, and Henry Ellenson were no match for Orlando’s lanky front court. The team even managed to nab eight offensive rebounds in the first two periods.

If this final string of games serve as a litmus test for the G League alumni, the Westchester graduates’ notoriously bad rebounding will be a strike against them.

The Knicks’ early lead was quickly fumbled away by inept play from their bench and a determined Orlando Magic team. With this 3-1 series behind them, they look to take on the Houston Rockets on Friday as the team tries to prevent a disastrous franchise-worst record, held by the 2014–15 Knicks at 17-65, with five games remaining.