Mike Miller vs. David Fizdale: What Have the Differences Been? 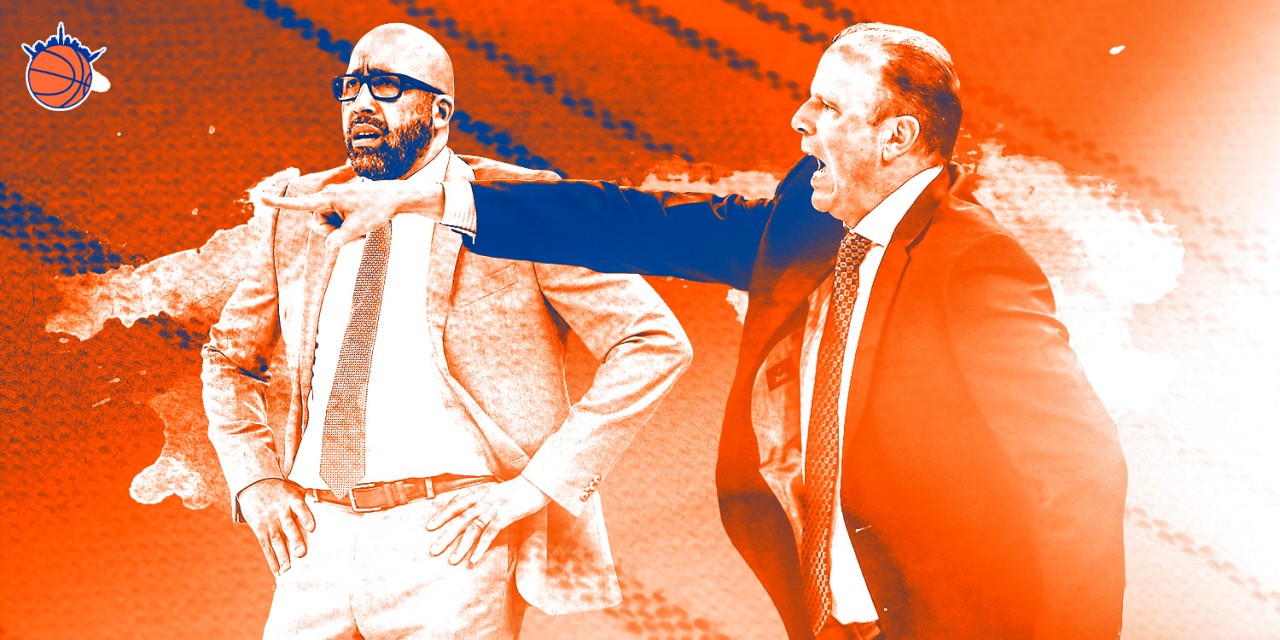 After a encouraging start as head coach, it’s been a mixed bag for Mike Miller. But that doesn’t mean it’s been worse than under David Fizdale.

In 22 games as the New York Knicks’ head coach this season, David Fizdale won four. Over the next 22 games as head coach, Mike Miller has won eight. With the amount of cap space the Knicks had over this summer, bragging about improvements but still starting the season 13-34 is the equivalent of shushing the crowd while losing by 30. Still, coaching is about putting players in the best position to succeed, and it is no coincidence that the Knicks have fared much better with Miller at the helm.

Miller is a more effective coach than Fizdale, and he’s put the Knicks in position to win by implementing schemes and better managing games. However, he has not yet taken the necessary steps to prioritize the development of the Knicks’ youngest players.

The Knicks’ offensive woes under David Fizdale boiled down to two intertwined issues: 1) the team took too long to get into sets and 2) Julius Randle was empowered to act in capacities not conducive to winning basketball. In the following clip—cut from the 37-point defeat by the Nuggets the day before Fizdale was fired—note how the Knicks don’t settle into their main offensive action until there are less than 12 seconds left on the shot clock:

To say nothing of the fact that it took the Knicks that long to get into a simple double-down screen action, it is clear that the delay in getting into the proper offensive position puts Randle in a tough spot. When the action blows up, there is not enough time for him to reset the offense. He has no choice but to try and get a shot off, leading him straight into the poorly spaced paint.

This is not the only way in which David Fizdale made life difficult for Randle. Fizdale exhibited unwarranted confidence in Randle’s ability as a ball handler and a creator. How a man making millions of dollars to coach a basketball team had this bad of a read on the team’s highest paid player after a full training camp and preseason is one of the greatest mysteries in the National Basketball Association. In what world is Julius Randle acting as a pick-and-roll ball handler with Dennis Smith Jr. as a screen setter with three players flat on the baseline an acceptable outcome in the year 2019?

Yes, the shot went in, but this clip demonstrates the unsustainable offense being run under Fizdale. Indeed, Fizdale’s coaching this season will likely be remembered as the time of Point Randle. Giving Randle the keys in the backcourt gave him undue confidence and led to a great number of possessions ending with no passes. Watch here as he bewilderingly tries to beat Giannis off the dribble after bringing the ball up, making zero passes on the possession, en route to a 44-point loss in Fizdale’s penultimate game on the sidelines:

Mike Miller, conversely, has taken the necessary steps to eradicate these issues. This is not to say Miller is some kind of offensive genius or that the Knicks no longer have any offensive woes. Miller has, however, mitigated risks that the Knicks frequently ran into under Fizdale.

Playing point guards is helpful. Elfrid Payton and Ntilikina are rushing the ball over halfcourt and initiating the offense extremely early in the shot clock. Miller has installed sets that encourage guards to move up the court quickly. In last Tuesday’s game against the Cleveland Cavaliers, Payton was able to get two extremely quick layups by getting into the simplest variation of the Pistol set early in the shot clock:

He snuck in another bucket from this set against the Lakers last Wednesday. The beauty of Miller’s schematic changes is that they all boil down to getting the ball past halfcourt quickly and they are initiated with a pass. Advocating for a first pass is key. An obvious flaw of Fizdale’s offense was thinking that Randle was better creating from a standstill through a size-up or backdown. Miller has been able to get Randle going downhill:

It is so much easier for Randle to attack when he has a head of steam and his defender is on his heels. In the above clip, Taurean Prince has to take his first step backwards. This is an offensive player’s dream, as Randle can now dictate which way he would like to attack and is almost guaranteed to get a step on Prince. It also lessens the likelihood that Randle uses his body simply to shove the defender out of the way and instead can use it to draw contact and protect the ball.

I wonder if eliminating Point Randle has anything to do with the spike around December 6th ?

Ultimately, the schematic changes that Randle has benefited from can be seen throughout the roster, with Randle displaying starkest contrast from Fizdale to Miller. By playing within a system with well-defined roles, players will improve at the desired skills and reads that will contribute more positively towards an offense. It is no wonder that the Knicks’ Offensive Rating is up to 107.3 under Mike Miller from 102 under David Fizdale. For reference, the Miller-led Knicks would rate as the association’s 22nd best offense whereas the David Fizdale led Knicks had rated as the worst offense in the league.

Unfortunately, Miller shares Fizdale’s stubborn reliance on veterans. The team’s minutes distribution is largely the same under both coaches, save for a few changes resulting from injuries. That no young player has seen increased minutes under Miller is puzzling and exists as Miller’s greatest flaw.

Some of the more cynical corners of Knicks fandom speculate that mandates to play the veterans are being handed down from the front office. Perhaps, but there has been no evidence of this in the past (people do not forget that Emmanuel Mudiay played one million minutes per game last year), and trying to bolster trade value through extra minutes is misguided. Marcus Morris has had injury scares. No team is going to get encouraged by watching Bobby Portis and Elfrid Payton not try on defense for stretches. On Friday night vs. the Raptors, a lineup of Payton, Bullock, Morris, Randle, and Portis was featured heavily in the second quarter. These players fit horribly together, and there is little to no chance of any of them progressing. What is possibly to be gained from playing these five together?

Miller’s reluctance to play younger players is troubling, and I will touch on that later. It seems that his defining characteristic as an in-game manager is risk aversion. He sticks with the veterans because they are known quantities. He instituted drop pick-and-roll coverage to avoid issues arising from big men switching onto the perimeter and leaving the rim unprotected. His offense defines where players go and narrows the scope of their decision-making. He actively manages games by calling timeouts when he feels a lead is slipping.

Mike Miller is the king of the preemptive timeout with a big league and I will take it 11 times out of 10. No lead is ever too safe with this team

Still, there is a fine line that can be crossed when calculation goes from an asset to a liability, and a coach can only control so much. Fizdale did not regulate games or players nearly enough. The results, as we know, were disastrous. Miller’s calculated approach can help put the Knicks in better positions to win. The question is: when the team is on pace to win less than 25 games and Miller’s calculation comes at the expense of minutes for the younger players, does it matter if the team is in a marginally better position to win?

Another problem that plagued the Knicks under David Fizdale was the younger players operating out of realistic contexts. Kevin Knox led the team in total field-goal attempts last year, and what does he have to show for it? His offensive game has ostensibly regressed. Smith Jr. averaged 14 field-goal attempts per game with the Knicks last year. His skill has seemingly evaporated. Under Miller’s (slightly) more competitive brand, these players have struggled to carve out a role for themselves.

Frank Ntilikina, Damyean Dotson, and Mitchell Robinson, meanwhile, have demonstrated progress by honing skills that help winning basketball. The way that they are playing is increasingly looking like the way NBA players play. Frank still needs to vastly improve as a shooter; 0-8 games like his performance versus the Lakers should not be excused. He has found ways to improve the team despite shooting under 40% from the field. He has become more comfortable handling the ball and setting up teammates, he has developed good pick-and-roll chemistry with Robinson, and he still defends at a very high level.

Dotson also has not shot the ball particularly well, but he is increasingly becoming a known quantity. He works harder than anyone on the Knicks every time he is on the floor, and it is not particularly close. Robinson is elite as a rim protector and a rim runner, skills that are essential no matter what team he is playing for. It is no surprise that the three man combination of Frank, Dot, and Mitch has a Net Rating of +6.8 per 100 possessions. Ntilikina and Dotson have the best Defensive Rating out of any two-man combination on the team at 95.1. Yes, these minutes are largely against backups, but Frank, Dot, and Mitch are positively influencing the team.

The point here is not to needlessly slam Knox and Smith Jr., but to demonstrate how Mike Miller has been able to foster development by providing players with quality minutes. The obvious question is: why are we not seeing more of this? Knox does not currently have the opportunity to establish a role because he has cracked 20 minutes just twice in the last 14 games, both of which came in losses of more than 20 points. Ntilikina is averaging less than 18 minutes per game under Miller. Bobby Portis is still playing. As SNY’s Ian Begley reported, unrealistic expectations were set this season. Even so, what about 13-34 doesn’t suggest it is time to look in the mirror and re-evaluate?

Given what we know about Mike Miller’s cautious approach to his rotations, it is difficult to see the roadmap to the Knicks’ younger players getting the right quantity of quality minutes. Ideally, a trade deadline shake-up will change the roster enough so that Miller has no choice but to increase the playing time for the youngsters, allowing his coaching competence to achieve synergy with the ever-elusive New York Knicks player development.

David Fizdale’s tenure as head coach of the New York Knicks will be remembered for his development of Emmanuel Mudiay, a player who left after one year, and the worst winning percentage of any Knicks coach ever. Ultimately, will Mike Miller’s legacy as head coach be that he set the franchise up for success and won a few games that Fizdale could not have? Or will it be that he stifled player development at a time the Knicks needed it the most?

»READ: Mike Miller may have found the lineup to get the Knicks going