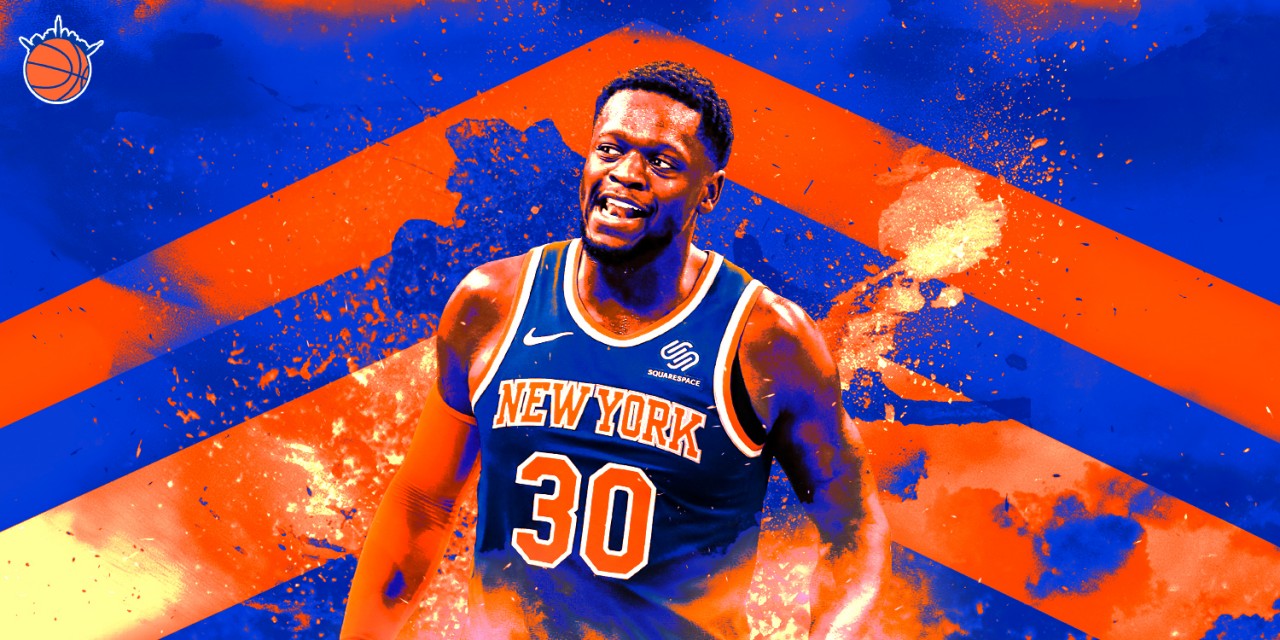 Julius Randle has seen a serious uptick in productivity since interim head coach Mike Miller has been handed the reins, and it’s the little things.

Julius Randle has the ball near the free throw line. He takes a few dribbles and begins his patented spin. As four Washington Wizards defenders converge, everyone in the arena and watching at home expect this to end with Randle forcing a contested layup over multiple defenders.

Randle’s modus operandi for most of the season has been spinning aimlessly into the paint like the Tasmanian Devil. But this time Randle doesn’t complete the spin. Instead, he keeps his head up and finds Frank Ntilikina wide open in the corner.

THREE BALL CORNER POCKET! FRANKI3 knocks it down off the kickout from Julius pic.twitter.com/FB6tgD48ae

A run of the mill play for most, for Randle it’s progress. A month ago he would have completed that spin, ignored Ntilikina altogether, and opted for the tough shot. That’s the Julius Randle to which Knicks fans have grown accustomed. Part of the blame goes to Randle himself, but his former coach David Fizdale shares a healthy amount of blame too.

Coaches can’t play for their players, but they can put them in the best position to succeed. Fizdale was not able to do this for Randle. He arguably put Randle in the worst position, forcing the biggest signing of the summer play so poorly he apologized to his teammates.

For the first 22 games of Randle’s Knicks career he was asked to be both top scoring option and facilitator, two things he has never been asked to do. Was Fizdale drunk on potential after unlocking a new version of Noah Vonleh last season, or just clueless? What we do know is that Fizdale had no idea how to use the player New York was most invested in.

Things have gotten better since Mike Miller took over. Randle has started to look like the player fans and the front office thought they were signing. The sample size is still relatively small, but the returns have been substantial.

In 14 games under Miller, Randle is shooting 46.6% from the field, 76.1% from the free throw line and 33.8% from three. He is averaging 21.4 points, 10.0 rebounds, 3.0 assists and 2.3 turnovers per game. In 22 games with Fizdale, Randle averaged a full five fewer points per game (16.8), and was worse in every conceivable category except free throw attempts, the only thing to remain constant.

Is Miller a wizard who has done some magic ritual to awaken Randle’s talent? No. Is Randle’s uptick in production sustainable? Absolutely.

The improvement is impossible to ignore. Randle had three straight games of 30 points to end the calendar year. In those games he averaged 7.7 attempts from three, hitting at 47.8% clip, and shot 52.9% from the field.

Miller has made minor tweaks to the offense, relying more on pick-and-rolls versus iso “bully” ball, putting Randle in better positions to succeed.

Miller has done a great job shifting Randle’s responsibilities without demoting him. He still expects Randle, along with Marcus Morris, to lead the team in scoring. The main difference is where he is asking Randle to set up shop and how he wants him to generate points.

Fizdale opted for an iso-heavy offense with Randle and Morris as his top options. This decision led to cluttered spacing, with Randle and Morris setting up a lot of their offense down low. Morris eventually meandered to the three-point line thanks to a hot hand from deep this season. Randle on the other hand stayed down low and was asked to create something out of nothing.

Miller moved Randle to the elbow and top of the arc. This has freed him to do what he does best: freight train his way to the rim.

Julius Randle with the GROWN MAN AND ONE pic.twitter.com/Mi7IJRyBLf

It also allows him to shoot more. One key area of Randle’s game that has changed with Miller is his three-point shooting. He is averaging more attempts (5.1 compared to 3.6) and is shooting nearly 10 points better on his long shot as a result.

Catch and shoots like this were few and far between early in the season.

If Randle wants to keep being good that would be really cool pic.twitter.com/1xXjveveAL

Randle’s improved shooting from three last season was a major reason the signing looked good, and why many believed he and Mitchell Robinson were compatible. Now that his hot shooting from outside has returned, he is noticeably more confident, which has caused a trickle down effect to the rest of his game.

He still takes more tough shots than you would like, and still loves that spin, only now he has room to do it.

Randle with the hoop + the harm ?? pic.twitter.com/9MPHpzunx8

Now able to generate offense outside the paint, Robinson is freed up to roll to the rim (the Knicks’ best source of offense) and wreak havoc down low. This opens lanes for both Randle and R.J. Barrett, who has had his own struggles scoring due to traffic jams in the paint.

Creating easy looks like this for Barrett is essential while Barrett figures out his jumper.

Passing is still a bright spot in Randle’s game when not abused. Fizdale went to the extreme trying to replicate Vonleh’s success bringing the ball up last season, believing Randle could be a point-forward. Randle was neither comfortable with the ball nor careful. He is a good passer for his position, but it works better within the flow of the offense.

His assist average was the only thing to decrease after the head coaching change, due in part to Miller’s simplified offense and not asking Randle to be a point-forward. The larger reason is the return of Elfrid Payton giving the Knicks a true table setter. Payton and Randle’s familiarity from last season in New Orleans is self explanatory, but Payton is the best pure point on the team.

Without Payton the ball didn’t move as well, especially when Frank Ntilikina and Dennis Smith Jr. went through their cold spells. Payton’s reinsertion into the starting lineup has allowed Randle to facilitate where necessary, leading to refined decision making. Randle is turning the ball over less; he even had one game with zero turnovers, which he was unable to do in the first leg of the season.

Now that Miller has “got Randle right,” does that mean he’s a big part of the future again? Not exactly. If a team comes over the top with an offer for Randle you trade him.

An offer like that seems unlikely. For now, Randle is still a 25-year-old player with talent that, if properly harnessed, can contribute to winning games eventually. And who knows, if he keeps this up, maybe he’s part of the core that starts turns this ship around. It’s just good to see that Julius Randle is back to being the player we thought he was.