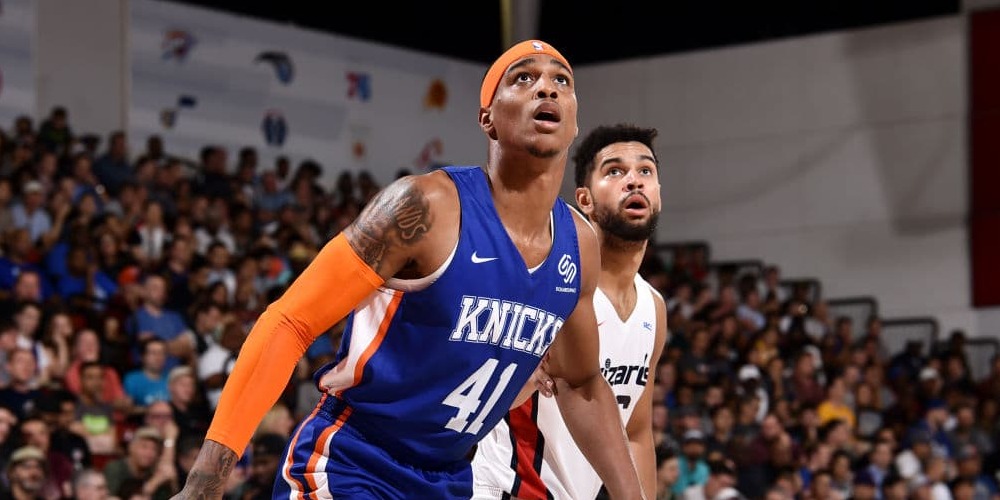 NEW YORK — Former Oregon Duck Kenny Wooten is not with the New York Knicks on Thursday in their home matchup with the Phoenix Suns. Instead, the 6-foot-8 undrafted forward is traveling with the G League affiliate Westchester Knicks in their Saturday tilt with the Lakeland Magic.

Despite Wooten’s absence from Thursday’s bout, he made his presence—and one day of his prorated two-way deal’s total allotment—felt in New York’s practice this week.

“We’ve spent a lot of time, we’re very familiar with him…really excited to see how [Wooten] has grown,” interim head coach Mike Miller said pre-game Thursday. “Derrick Alston and the Westchester staff have done a great job with him, bringing him even further. … I went to a couple Westchester games and the impact he’s having on the games there—it’s growing and growing, and that’s what we’re looking for.

“He needs that experience right now, he’s getting major minutes there, he’s involved in late-game…he’s seeing different situations. … He’s trending the way he needs to. He’s doing everything he needs to right now.”

Wooten, 21, signed a two-way contract on Monday with the Knicks, who subsequently waived Ivan Rabb to clear room on the roster for the ex-Duck. Wooten, at primarily power forward in White Plains, has been a beast on the glass for the DubKnicks following his Las Vegas Summer League stint with the Knicks and later preseason and training camp invite. With Westchester, he’s averaging 7.8 points, 5.9 rebounds, and 3.35 blocks a contest, including eight games with five or more blocks—a franchise record, according to the team.

For now, however, it does not look like Miller has a spot for Wooten in his big-league rotation, especially with bodies in the frontcourt like veterans Taj Gibson and Bobby Portis playing minutes. Nevertheless, with the NBA’s trade deadline approaching on February 6th, it’s not inconceivable to expect one or more players gone by that time, and Kenny Wooten called up from the G League for minutes at the highest stage. For now, though, the Knicks secured Wooten contractually to avoid losing the blossoming, shot-blocking forward to another organization.

Meanwhile, Miller also had high praise for Kadeem Allen, his former point guard in Westchester when New York’s interim head coach served in the full-time role with the developmental team. Allen, who turned 27 years old yesterday, appeared in 19 games for the Knicks during the 2018–19 campaign and had to backup Elfrid Payton in the past three weeks with injuries afflicting third-year point guard Dennis Smith Jr. (oblique sprain) and Frank Ntilikina (sore groin).

“It’s been good bringing him back,” Miller commented on Allen. “He has a very good feel, obviously, for what we’re trying to do. I think he continues to help himself. He defends his position at a high level.”

With Smith Jr. out again on Thursday, Allen could be playing more minutes.

On the trade deadline front, Miller was asked about Marcus Morris Sr.’s continued absence (sore neck), as the veteran forward—and the Knicks’ leading scorer—makes his return in tonight’s matchup with his former team, the Suns, after missing the past five games. Miller did not comment on his involvement in the front office’s reception to trade offers but coyly answered that Morris is “valued” within the organization after rumors sparked that New York would prefer keeping the 30-year-old, who’s on a one-year, expiring deal.