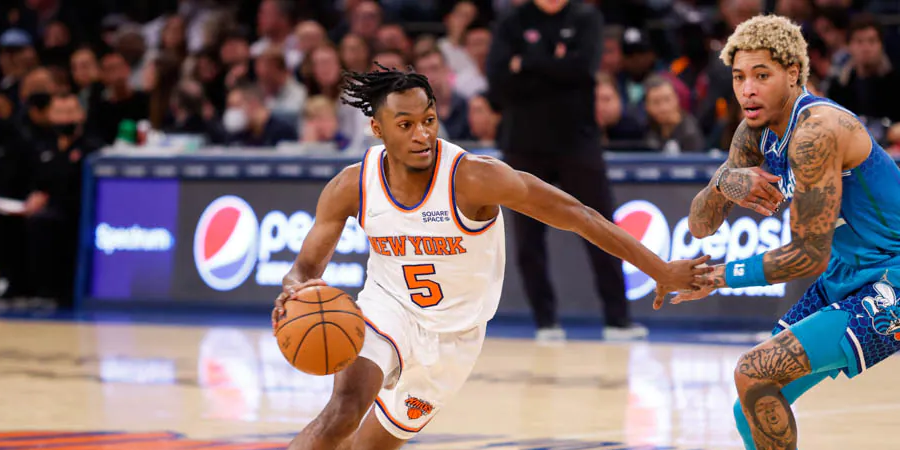 The Knicks’ season-best four-game winning streak came to a close on Wednesday night a fluid Hornets offense out-pacing the ‘Bockers.

The New York Knicks (34-43) dropped a game to the Charlotte Hornets (39-28) by a final score of 125-114. While there was a chance for the Knicks to tie things up in the fourth, their porous defense and many turnovers were simply too much to overcome.

They allowed 42 bench points from the Hornets and had 12 turnovers that led to 19 points for Charlotte.

New York was coming off a win against the Chicago Bulls on Monday night, where Alec Burks and RJ Barrett showed out to get a much-needed victory that extended the team’s win streak to four.

The first quarter began with two turnovers back to back from the Knicks. The Hornets capitalized both times with quick layups on their end of the floor to quickly get the lead. This set the tone for the first few minutes of the period with it feeling like nothing could go down for New York, while Charlotte was humming on offense.

Then, Julius Randle hit two three-pointers to get the scoring going for the ‘Bockers. He opened the floodgates for RJ Barrett, Mitchell Robinson, and Evan Fournier to get in on the fun which helped get the Knicks up by five over the Hornets with just over seven minutes left in the period. Turnovers continued to pester New York, as they committed five turnovers in the opening quarter, and their defense started to unravel as the quarter went on. But, with the brute force of Barrett at the basket, they were up two headed into the second.

Defensive woes carried into the second quarter. New York was not competing well against the craftiness of Charlotte’s backcourt of LaMelo Ball and Isaiah Thomas. Their offense was sputtering as well, having only scored three points with just over four minutes played in the period. Once the Knicks started to push the pace, they were able to get a few good looks at the hoop for alley-oops. It was becoming a back-and-forth affair with both teams committing errant fouls on each other that were leading to conversions at the line. Ball, along with the Hornets, was the first to start to heat up again from deep, though, and they easily regained the lead over the Knicks. Even with New York’s defense clamping down as the second finished, they were down three at the half in what was shaping up to be a closely contested game. Barrett led the team through two with 18 points.

The second half began just like the first half ended, with back-and-forth scoring defining the affair. While New York seemed to have found their stroke again with Alec Burks and Fournier hitting from deep, Charlotte kept responding by scoring off turnovers. Fouls were also starting to dictate the pace of the game, with many stoppages in between plays that were bringing scoring to a halt for New York.

A bright spot for the Knicks was the offensive rebounding prowess of Robinson, which was especially noticeable in the third with the fourth-year center cleaning up any poor shots that the ‘Bockers were tossing up. Unfortunately, there was not much cleanup that Robinson could do with how many three-pointers the Hornets were hitting in the period, with Kelly Oubre Jr. hitting back-to-back shots to put Charlotte up by six with just over three minutes left in the third. Thankfully, Fournier was starting to heat up from distance and finished the quarter with 27 points along with Randle, who had 17. They helped keep the game close, and New York was only down eight leading into the fourth quarter.

The Knicks had to lock down on defense to cool the Hornets off to try to regain the lead. But Charlotte stormed out of the break to score effortlessly against the Knickerbockers’ second unit which prompted a quick timeout for coach Tom Thibodeau. After that pause in action, New York hit back-to-back three-pointers courtesy of Immanuel Quickley and Burks. But, as was the theme of the entire game, the Hornets were able to respond with shots of their own. Quickley continued to look to get to the basket as the Knicks desperately needed paint scoring. His driving, coupled with unselfish passing all around for New York got them back into the game, as they were only down three with just under six minutes left in the fourth. Once Quickley was subbed out of the game, New York’s pace slowed significantly. As a result, their defense and offense fell one step slow once again as Charlotte was able to extend the lead back to seven in their favor. New York was never able to recover from their poor defensive sets that allowed Charlotte to get anything they wanted to close their win out.

New York will face off with the Cleveland Cavaliers on Saturday afternoon at Madison Square Garden. The magic number to officially eliminate the Knicks from play-in contention is just one loss.