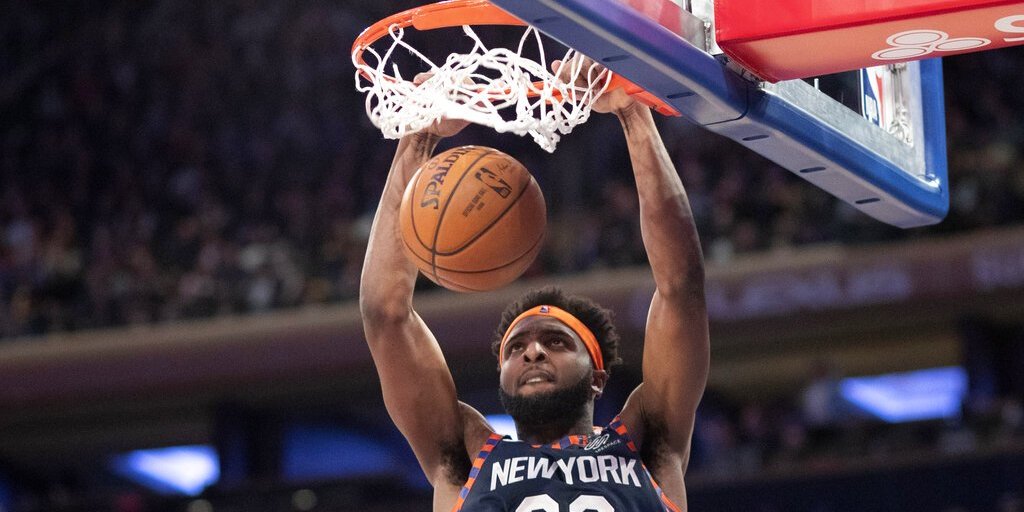 NEW YORK — An abundance of questions surrounds the New York Knicks right now. The overall goal of their current rebuild, the rotations of head coach Mike Miller, and the path to getting back on track are all very unclear.

Perhaps the most prominent question about the Knicks is why Mitchell Robinson—the team’s most disruptive defender and one of its best players—is still coming off the bench.

Miller answered that question in his pregame press conference ahead of Saturday night’s matchup against the Chicago Bulls. “How well Mitchell’s playing. It’s that simple,” Miller explained. “If there comes a time where we need to change it, we’ll change it. But right now, he’s playing the best basketball of his career.”

Mike Miller on what he sees that leads him to start Taj and have Mitch come off the bench:

Miller’s decision to use Robinson as a bench player is unpopular with just about everyone. Robinson doesn’t mind it, though. “Starting, not starting, it doesn’t really matter to me,” the second-year center remarked pregame. “I’m just here to play hard, help my teammates.”

Miller added that Gibson has “gotten us off to great starts.” Indeed, the 34-year-old big man has had multiple games in which he scores most of the Knicks’ first buckets.

Gibson proved Miller’s point by scoring New York’s first seven points of the night and first-quarter-high nine points on 4-for-4 field goal shooting. He finished with 17 points and eight rebounds in the losing streak–snapping home win.

Robinson also had a strong opening period, recording eight points on 4-of-6 shooting. By halftime, he had 12 points and five rebounds.

Robinson played all but three minutes of the fourth quarter, with Gibson giving him a break from the 6:02 mark to the 2:42 mark. In the game’s closing minute, Robinson sealed the deal by throwing down an alley-oop from Barrett and finishing through contact on a layup.

In 28 minutes, Robinson finished with a career-high 23 points, 10 rebounds and two blocks on 11-for-16 shooting from the field. He recognized Chicago’s defensive scheme would lead to him being open time after time.

“They were trapping on the ball a lot, they put two on the ball, so somebody’s gonna be open,” he said. “And if I get behind the defense, I feel like they’re gonna forget about me. So that’s kinda what I was doing, and then my teammate was looking for me.”

Mitchell Robinson wasn’t the only youngster to step up his game. R.J. Barrett found himself in a groove during the second quarter, scoring 12 points on 5-of-6 field goal shooting. The rookie led all scorers at halftime with 17 points and ended with 19 points, four rebounds, and three assists.

When RJ is under control he’s a joy to watch.

Barrett’s efficiency was extremely promising; the young guard shot 8-of-10 from the field, including 3-for-4 on triples. Although he also went 0-for-4 from the charity stripe, his terrific shooting splits on field goals should be praised.

“R.J. was so sharp that first half,” said Miller in his postgame press conference, “and he really was for the game. They were trying to do different things to take things away, and he played within the game.”

Kevin Knox also put together a solid game. Though the box score numbers aren’t mind-blowing—12 points and six rebounds on 4-for-9 field goal shooting and 2-of-3 on three-pointers in 21 minutes—Knox was impactful.

Miller made sure to praise Knox’s strong play in addition to that of Robinson and Barrett. “He’s making the energy plays, putting us back in it. He hits a big shot, he’s defending multiple positions. I think it was an outstanding game for him. He greatly impacted the second half as well [as Robinson and Barrett].”

THIS IS THE KNOX WE WANT

New York planned to slow down Chicago’s Zach LaVine, who ranks tied-for-11th in points per game, and Coby White, who has surpassed 30 points in each Chicago’s last three games and recorded seven three-pointers in the fourth quarter of the Knick’s last matchup with the Bulls.

Miller said the two Bulls guards have been incredible as of late: “The numbers they are putting up has been high level.” Elfrid Payton said that, because LaVine and White are constantly shooting, “it’s almost impossible to keep those guys from getting numbers.”

On New York’s plan to slow down the Bulls guards, Damyean Dotson commented “give them no easy looks, try to make everything tough on them. Contest their threes and run them off the line. Keep Zach out of the paint, gotta contain him and make him go to his weak hand. Crowd him, get under him. And make Coby White do something else besides shoot.”

New York was able to hold LaVine to 26 points on 40% field goal shooting and keep White to 22 points. Other keys to New York’s victory included winning the rebounding battle 50-33 and only committing one shooting foul in the fourth quarter.

This victory over the 20-42 Bulls doesn’t suggest New York is ready to turn this seemingly lost season around, but it’s certainly refreshing to snap the second-longest losing streak of the season.

With New York now sitting at 18-42, Leon Rose is reportedly slated to step in as president as the calendar turns to March. Although Rose is beginning on the heels of a victory, New York has plenty of work to do.