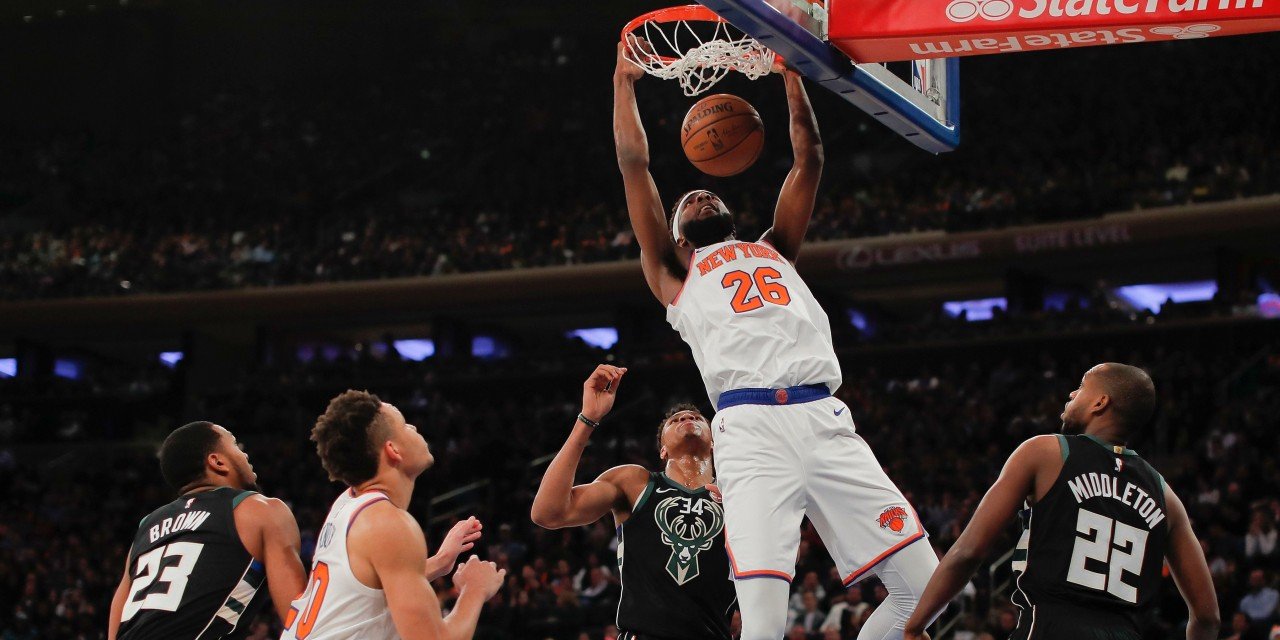 As a second-round pick, the unheralded rookie Mitchell Robinson had an uphill climb to NBA relevancy but turned heads with a strong freshman season, earning a spot on the All-Rookie Second Team.

After dropping out of a commitment to play at Western Kentucky University, Robinson’s basketball career was in jeopardy. Despite being a highly ranked prospect coming out of high school—and participating in the McDonald’s All-American Game—Robinson’s draft stock fell dramatically following his Western Kentucky departure. Working out for the Knicks, however, left an impression on New York’s front office, with general manager Scott Perry selecting the seven-footer with the 36th overall pick in last year’s draft.

Robinson was immediate shot of adrenaline for a often-fledgling Knicks defense all year. The shot-blocking prowess from the now-21-year-old had deliberate effects intimidating opposing teams and players attempting close-range shots—even long-range shots, as the rookie demonstrated acute skills at blocking three-point attempts.

“I think [Robinson] he’s got a lot of talent … all the tools to be a great player, and he’s getting better,” Utah Defensive Player of the Year center Rudy Gobert told MSG Networks after the Jazz defeated the Knicks in March.

In his first season, Robinson averaged 7.3 points, 6.4 rebounds, and 2.4 blocks per game in 66 contests and 19 starts, per Basketball-Reference. As for the advanced metrics, Mitchell shot eye-watering numbers with a 69.4 eFG% and 69.2 TS% (via NBA Stats).

Robinson’s game doesn’t end on defense, however. The 7-1 product out of Chalmette High School became a dangerous alley-oop target for New York over the course of his introductory season. In spite of Robinson’s limited versatility on offense, he proved to be a viable scoring option in screening for his team’s ball handler, rolling to the rim and shooting an electrically efficient percentage up close. Robinson also convinced second-round skeptics during his rookie season with his incredible offensive rebounding ability; he hadn’t grabbed more defensive rebounds than offensive until the second half of the year.

Mitchell Robinson: “It feels great. I was the 36th pick. My hard work paid off. The Knicks believe in me and have helped me become a better player.”

Going forward, Robinson will assuredly be a part of New York’s young core; that is, unless he’s dealt to New Orleans in a trade built around the center and the Knicks’ third-overall draft pick, in order to acquire All-NBA power forward/center Anthony Davis.

Speculation points to New Orleans attempting to make amends with Davis after a tenuous season between The Brow and the Pelicans’ old management. Following the hires of David Griffin and Trajan Langdon, and the Pels winning last week’s NBA lottery, the Bayou team is trying to build a squad around Davis and presumptive number-one overall pick Zion Williamson.

If the Pelicans should decide to solely build around Williamson and other young players, then Davis would be on the chopping block again, with New York as a preferred destination in which to extend his perennial all-star career. Unfortunately for Robinson, that could mean cutting ties with the Manhattan franchise, sending the 21-year-old back to his home state of Louisiana.

Nevertheless, Robinson’s All-Rookie honor signals a small accolade for the center, at the start of what will surely be a long, successful NBA career.

Here’s the full list of the All-Rookie honors recipients:

The Knicks released the following to the public: