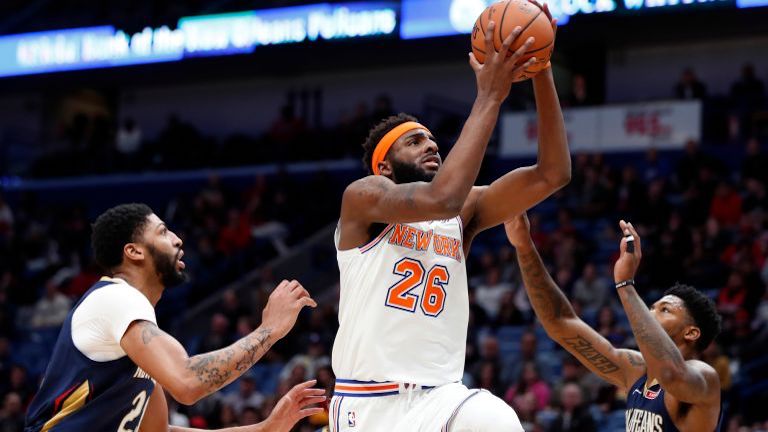 Mitchell Robinson aggravated his groin muscle while rehabilitating an ankle injury and the seven-foot rookie will be out for longer.

Rookie center Mitchell Robinson has been further sidelined due to yet another injury. Marc Berman of the NY Post reported that Robinson, who will be missing his 10th straight game, is suffering from a groin injury. According to multiple sources, he suffered the injury while rehabilitating his ailing ankle.

The irony isn’t lost, and this is worrisome. Robinson was averaging 4.7 points, 3.9 rebounds, and 1.8 blocks per game on 64 percent from the field. A natural defender, without Robinson the New York Knicks have defended poorly. The team’s Defensive Rating was 112.1 with him off the court, but drops to 109.8 with him on the court (per NBA Stats).

Although Robinson doesn’t have much of an offensive game, and his low rebounding percentage is a gaping weakness, his defensive capabilities are still a huge help for the Knicks.

The dual injuries may be indicative of an issue with Robinson as a whole, or at least raises the question: is he an injury-prone player? It’s early in his career—in fact, it can’t get any earlier—and injuries happen to be an unfortunate yet unavoidable part of the job. If this isn’t merely an anomaly, it adds yet another flaw to Robinson’s game.

However, this could just be due to carelessness on his part. As a 20-year-old, he’s still learning the game, and on more than one occasion the young rookie has stepped forward into jumping shooters. This may just signify another growing pain, and not a perpetual lack of sturdiness. All the same, Robinson has missed enough games this season.

So far, the Knicks have played 39 games, a hair under half of them. Robinson has appeared in only 28 and looks to miss a few more.

With foul trouble constantly looming and questionable health, it’s hard to put much faith in Robinson as a long-term solution to the Knicks’ center depth. Second-year player Luke Kornet has helped shore up the 5 spot while adding refreshing spacing and may eventually become a regular in the rotation, even with Robinson’s eventual return looming.

This update to Robinson’s availability is a disappointing development. Missing his 10th straight game and 12th overall, the team will once again be shorthanded a rim protector.

Hopefully his newly announced groin injury doesn’t keep him down for much longer; the Knicks need a lob to get Madison Square Garden jumping again.