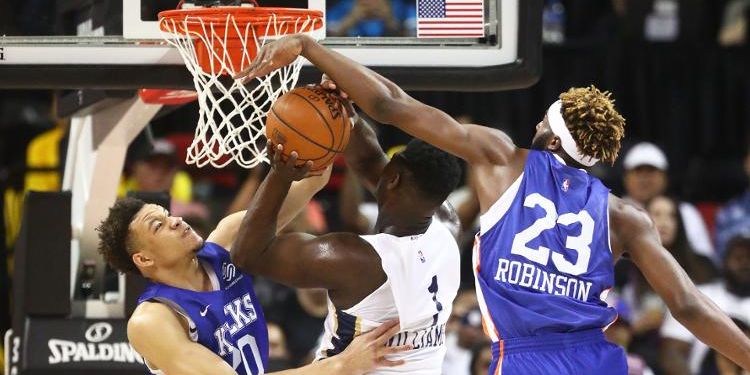 The Select Team is a supplemental 10-man roster to the 18-man Team USA squad already filled with experienced basketball veterans. Team USA’s final roster for the 2018 FIBA World Cup consists of 12 players, making the chances of Robinson being one of the 12 slim to nil. USA Basketball invites up-and-coming talents, in this case Robinson, to practice against the team in scrimmages prior to tournament time.

Still, it’s an honor and the night the news broke Robinson showed exactly why he was one of the 10 rising stars invited to practice and scrimmage.

In the first game of his second year in the NBA’s Summer League Robinson looked like a man among boys for most of his time on the court. His talent and chemistry with fellow second-year player Allonzo Trier was apparent on several sequences. He tallied eight points, 10 rebounds, four blocks, and two steals. Most telling were his blow blocks on phenom Zion Williamson.

Unsurprisingly, Williamson was invited to the Select Team as well. In bittersweet fashion, Knicks fans have a chance to experience the Zion-Robinson tandem that seemed like a lock only a few months ago before the Pelicans won the draft lottery.

Currently, his competition at the center spot are shot-blocking rival Myles Turner and Andre Drummond. Both have been confirmed to attend the training camp in August. There’s a possibility he’ll make the team if coach Gregg Popovich decides he needs a rim-running lob threat that flusters teams on both ends of the floor.

Robinson had a breakout at the end of the 2018–19 season averaging 9.5 points, 9.4 rebounds, and 3.0 blocks after the All-Star break. He earned a spot on the All-Rookie second team, too. Robinson’s invitation to Team USA’s Select Team of promising hopefuls suggests that his talent has not gone unnoticed.