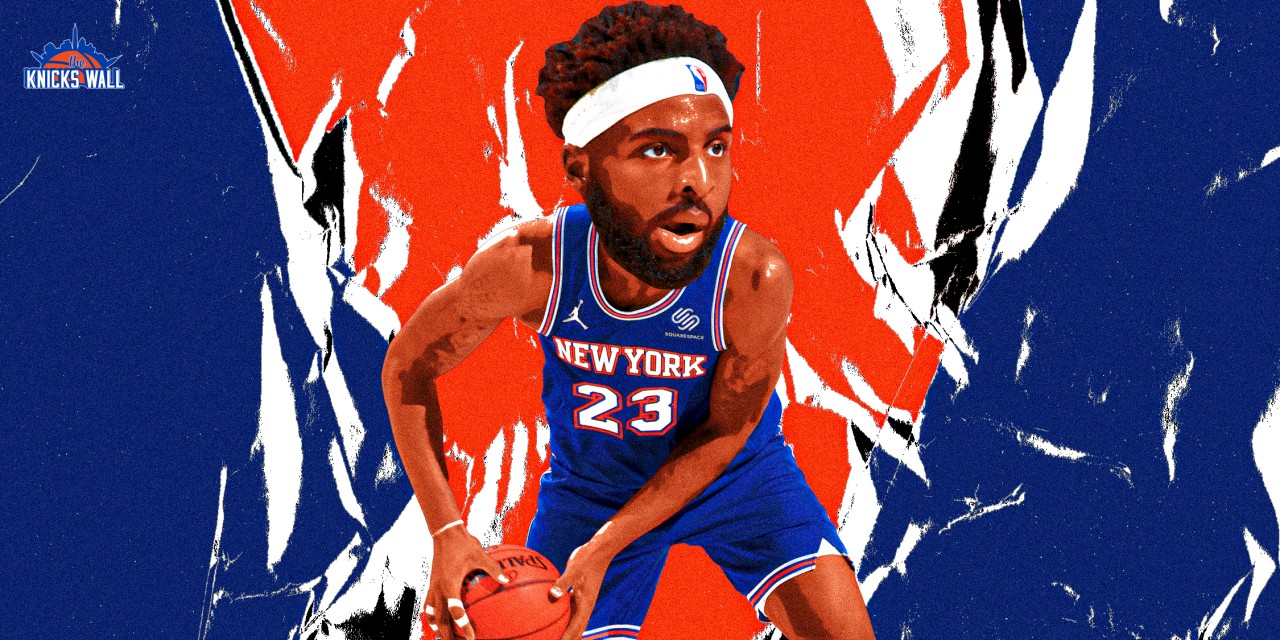 Third-year behemoth Mitchell Robinson has become a mainstay in the Knicks’ starting lineup after ordinarily coming off the bench as a rookie and sophomore.

It wasn’t long ago when Mitchell Robinson’s long-term fit on the New York Knicks was called into question. Just over a month ago, when the NBA preseason commenced, head coach Tom Thibodeau opted to roll with the veteran Nerlens Noel in the starting five in lieu of Robinson. Two games into the preseason, and by all accounts, it appeared as if Noel would be the Knicks’ man in the middle on opening night. Noel held the edge over Robinson in minutes, points, rebounds, and blocks. Not to mention Thibodeau has a long-lasting history of giving youngsters a short leash.

As fate would have it, knee soreness struck Noel after game two, and he was forced to sit out the final two outings ere the regular season. Robinson seized Noel’s starting spot and has yet to relinquish it after capping off the preseason on a high note, putting up 10.5 points and 11 rebounds over the last pair of preseason tilts. With the undeniably positive impact that Robinson has provided on both ends of the court for the Knicks thus far, it’s safe to say Noel will remain New York’s backup center for the foreseeable future.

Defense: remains a shot-blocking savant, all while nipping his penchant for picking up fouls in the bud

Robinson joined the NBA as an already-elite swatter. In 20.6 minutes of run time as a rookie, he sent away 2.4 shots on average, just a few percentage points short of the league leader that year, Myles Turner (2.69). Robinson was built to excel in defending the goal, with an albatross-like wingspan and incredible agility for a player of his stature.

Robinson piled up blocks at a historic rate for a neophyte, although there was a noticeable hole in his defensive repertoire—he couldn’t stay out of foul trouble, which plagued him during his rookie and sophomore campaigns. He averaged 3.25 fouls over his first two years in the pros, all while functioning in a reserve role.

As is the case with many prolific shot-blockers, Robinson had a notorious habit of block-hunting. He would attempt to block shots at the rim regardless of whether he was in the play or adequately positioned to do so. Opposing bigs often caught the block-happy Robinson biting on pump-fakes, and there was widespread concern whether the big man could play starters minutes without fouling out.

Thankfully, Robinson has turned a new leaf in year three, showcasing newfound defensive awareness and I.Q., which beautifully complement his advantageous measurables. Robinson’s new-and-improved foul percentage highlights just how far he’s come in his ability to defend without fouling. According to Cleaning the Glass, going into the Utah Jazz loss Robinson’s foul percentage is just 3.5% this season, ranking in the 60th percentile among bigs. Essentially, Robinson is avoiding fouls at an above-average rate—a remarkable achievement considering his former ineptitude. For perspective, his foul percentage in 2019–20 was a significantly higher 5.5%, which placed him in the lowly 18th percentile.

While Robinson has become significantly less foul-prone, has this affected his stout shot-blocking numbers? In short, yes. Robinson is accumulating just 1.68 blocks in 2020–21, far-and-away a career-low. But make no mistake, this dip on the stat sheet is not an indictment that Robinson’s rim protection prowess has dwindled.


The stats back up his position among the league’s finest interior defenders; opponents have converted just 56.1% of their looks at the rim when Robinson is on the floor with the starters before Tuesday (79th percentile). More importantly, he’s the anchor for a Knicks defense currently giving up the fewest points per game in the NBA.

Instead of striving to spike every shot attempt into the third row, Robinson has made a concerted effort to focus on simply altering and contesting shots. At the end of the day, the goal of defense in basketball is to force the opponent to misfire, and Robinson is doing just that, even if highlight-worthy rejections have become less frequent.

Robinson’s fouling conundrum getting squared away is merely the cherry on top for why he should be New York’s long-term answer at the center spot. Robinson has proven capable of anchoring an elite defense, and thus it’s a real possibility he’s the man in the middle on the next great Knicks team, whenever that day comes.

Offense: a pick-and-roll specialist who reliably generates extra possessions for his team

Robinson’s offensive toolbox is, well, limited. He fits the old-school big man’s archetype, taking just three shots away from the rim so far this season. The lion’s share of his points has stemmed from pick-and-roll sets with the aid of upgraded playmaking options from the year prior. Thanks to meteoric rises from Julius Randle and R.J. Barrett, and the additions of Alec Burks and Immanuel Quickley, Robinson has had the running mates necessary to feast as a roll man.

RANDLE TO MITCH ALLEY OOP. AND ONE pic.twitter.com/ftEd3a3Ndl

While operating as the screener out of the pick-and-roll, Robinson puts up 1.27 points per possession, a number good for the 76th percentile. This mark ranks superior to Nikola Jokic, Christian Wood, and Kristaps Porzingis. Robinson is practically guaranteed to score at the dunker’s spot considering his smooth gait, phenomenal hands, and unbelievable leaping ability.

Yet the Knicks run the two-person game with Robinson just 1.8 times per contest. When stagnation hits New York, implementing the most rudimentary set in basketball with Robinson can serve as a remedy. Coach Thibodeau should prioritize using Robinson in additional pick-and-rolls, particularly when he’s hooping with the bench unit.

Robinson fits the mold of yesteryear’s big men in more ways than one. Offensive rebounding is a dying art in today’s NBA, where coaches are more concerned with their players getting back on the other end to prevent transition scores. A sensible premise. But extra possessions are invaluable in a sport that is often decided by few. And Robinson is adept as anyone in the league at wreaking havoc on the offensive glass.

Not fair that this didn’t count. Mitch is a man amongst boys. pic.twitter.com/Ri4uVmvbBA

According to Cleaning the Glass, Robinson is snatching 13.5% of his teammates’ misses in 2020–21 (90th percentile) and averaging 4.0 offensive rebounds, both career-highs for the Florida native. Four possessions are, in most cases, enough to swing the outcome of a game. Robinson’s gift for securing misses has undoubtedly played a role in New York’s auspicious start to this new campaign; the Knicks are scoring a healthy 13 second-chance points per game, a feat that wouldn’t be possible if not for Robinson’s heroics on the glass.

Just because the range of Robinson’s offensive impact is restricted doesn’t mean it is devoid of value. Efficient scoring and relentless offensive rebounding are conducive to winning, and Robinson brings both of these skills in droves.

Robinson is New York’s center of the future. There are few in the league as committed to getting their hands dirty and doing the little things for the sake of winning. On both ends, Robinson plays tenacious, inspired basketball that no doubt rubs off on his teammates. To win with regularity in the NBA, a team must build a winning culture. Robinson, with his hard-nosed and uber-physical playstyle, is ushering in a collective mentality and physicality that harps back to New York’s golden years.

Editor’s note: The stats in this piece will be updated when presently available following last night’s Jazz game.