Knicks’ Mitchell Robinson Is Starting to See the Game 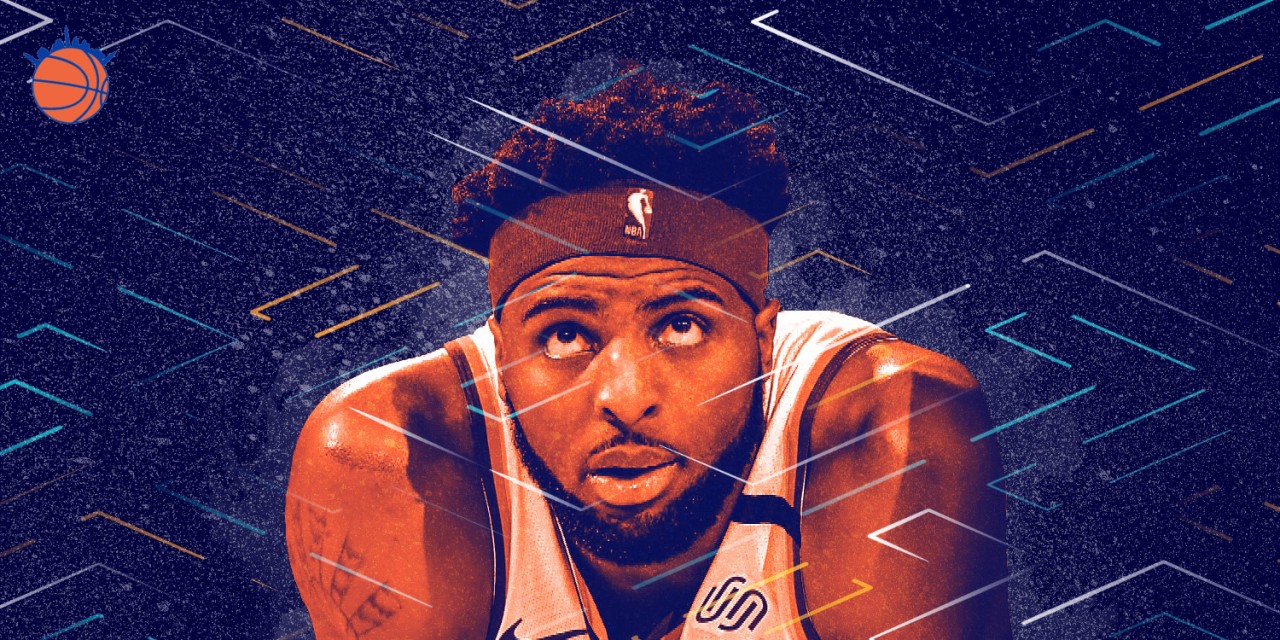 Don’t look now, but Knicks second-year center Mitchell Robinson is starting to develop a much more keen understanding of the entire game.

It’s safe to say at this point in the year that Mitchell Robinson’s sophomore season has been a bit of a mixed bag. Foul trouble, a smaller role than expected, and unrealistic expectations all contributed to at times overshadow the very real progress we’ve seen from the seven-foot, quick-twitch freak, especially over the last few weeks.

First, let’s address those expectations. Robinson’s rookie season went about as well as anyone could’ve possibly hoped for a 20-year-old coming off a year of not playing organized basketball—not even pickup. Within 14 games, he’d already recorded the third-highest mark for blocks in a game in franchise history. By the end of the season, he was second in the league in blocks per game and fourth in total blocks, despite playing between 760-1,200 fewer minutes than the guys ahead of him (for context: Bobby Portis recently cracked the 1,200-minute mark for this season). And just like that, he became the single brightest spot on the roster going into the summer, the only surefire cornerstone in what had started to feel like an interminable tank.

So naturally, the bar was raised for his second year. Suddenly, the rebuild was about him and R.J. Barrett, and the expectation was that the Block Ness Monster was going to take his end-of-season momentum and carry it over into a monster second year.

But things started out rough in the preseason. At times, it seemed like Mitch barely wanted to be on the floor. He averaged 5.5 points and 5.5 rebounds on 47% shooting from the floor, only scored more than five points in the last contest, and the most concerning part was that he looked somehow more confused and undisciplined than he had towards the end of his first year.

Once the season started, though, he seemed to bounce back to life. After missing the first game with an injury, he started the next five, putting up 10.2 points, 6.6 rebounds, and 2.2 blocks a night. He also had four or more fouls in three of those five games, four of which were losses. Then, against Detroit, Robinson suffered a concussion that sidelined him for the next three games. By the time he came back, he had lost his place in the starting lineup. Permanently.

And while the demotion to the bench has infuriated fans all season long, myself very much included (I can’t believe I’m about to say this), there were some real benefits. It allowed Robinson to spend more time alongside third-year defensive guard Frank Ntilikina, which immediately blossomed into a beautiful, mutually beneficial relationship.

Did I say mutually beneficial? Oh right, because teams are so terrified of the lob they give up wide open lanes to the rim—exactly what the timid French point guard needs!

Wow Frank and Mitch in the game, run a P&R, automatic bucket

But more importantly, having Robinson come off the bench allowed him to avoid the epic spacing mess that is a starting lineup which includes Elfrid Payton (currently shooting 21.5% from three), Julius Randle (26.5%), and Barrett (a robust 32%). Compared to the starting unit, the bench is a shooters’ paradise, leaving Mitch with as much room as he wants to roam the paint, bring down ceiling-scraping alley-oops, or just gobble up offensive rebounds.

In fact, if you exclude Marcus Morris lineups from the data, the Knicks’ second-most used five-man lineup this season is Frank Ntilikina, Damyean Dotson, Kevin Knox, Bobby Portis, and Mitchell Robinson. That group has a +19.5 NetRating in 70 minutes played (per NBA.com). It turns out surrounding Ntilikina and Robinson with shooters is a good thing—who knew!

But the increased spacing isn’t the the only thing allowing Robinson to flourish recently—and with averages of 12 points, 10 rebounds, 2.6 blocks and only 2.9 fouls a night on 80% shooting over the last month or so, he has been flourishing. The most important development is also the most encouraging twist of the season: Mitchell Robinson is finally starting to read the game (don’t mind the uncharacteristic missed dunk).

No one who has watched Mitch could deny his instincts, his athletic gifts, his desire and hustle. But for much of his young career, his mind has been several steps behind his body. Finally it seems like the two are coming into sync.

One place this has shown up recently is in his rebounding. Last season, Robinson was equally likely to have jumped himself out of position for rebounds either going for a block or relying on his quick off the ground time, which led to a lot of inconsistency, especially on the defensive glass.

Lately, though, Mitch has shown a much greater awareness of his personnel and ability to keep his man off the boards. Here, Mitch finishes the alley-oop before running back to do whatever he can to keep Daniel Gafford, another hyper-bouncy big man, off the glass so that Randle can get the rebound.

Here he gets the block and immediately remembers his responsibilities—something he would’ve been much slower to do even earlier this year. While Denzel Valentine makes the shot, the effort and commitment are noteworthy.

The effort is paying off in the box scores too. Robinson is currently on an eight-game streak of collecting eight or more rebounds, the longest of his career. He’s grabbed double digit boards in four of the last eight games, including a huge win against the Rockets, where his and Randle’s presence on the offensive glass was crucial to the team’s success.

In a somewhat related note, recently we’ve seen the aptly nicknamed Block Ness Monster do a much better job staying on his feet when protecting the rim.

Over the first 30 games of the season, Mitchell Robinson committed 7.7 personal fouls per 100 possesions.

Over his last five games, Robinson’s foul rate has dipped down to 3.4 per 100 possesions.

He’s shown more discipline as an isolation defender, where he’s quick and long enough to be truly disruptive even when matched up with the league’s most explosive guards.

The final area we can see the game slowing down for Robinson is his emergence as a willing, aware passer. And make no mistake, this is a huge development. For as much as Knicks fans may swoon with every video of Robinson splashing pre-game threes, passing is actually a much more important aspect of offense for him. If he can make quick decisions with the ball in his hand, say on the short roll or operating out of the high post, that will help unlock Barrett’s slashing, Knox’s spot-up game, and much more. And there are signs that he’s going to be able to.

The foul comes before Knox can score, but this is a pass I’ve rarely, if ever seen Mitch even demonstrate awareness.

Another pass he seems to be getting the hang of is the kick-out to the top of the key, which will be a good tool to have in the kit on the off-chance the Knicks ever get some actual shooters in the starting lineup.

Mitchell’s biggest strength outside of his athletic abilities is probably his hands—his ability to catch bad passes and control them is truly special for someone his size—and if he can add a passing game to that, the entire team becomes a lot harder to guard (please ignore the R.J. airball).

Robinson’s role in his rookie year was about as simple as it gets: run and jump. This year, and especially recently, he’s been getting a little bit more responsibility. Not enough, mind you, the lack of allowing him to stretch himself during yet another losing season is often infuriating. But it’s there, if you squint.

This season, Robinson is averaging 1.2 potential assists per game. If that doesn’t sound like a lot, well, yeah, it’s not. It’s actually last on the team outside of Ignas Brazdeikis, who hasn’t gotten enough time to really count. But in the last five games, that number has jumped again, up to 2.6. That number would be just behind Maurice Harkless for top spot among non-initiators on the team, and is a huge jump from the 0.9 he averaged his rookie year.

Robinson won’t be turning into Nikola Jokic, manipulating the defense without ever taking a step, any time soon. But over the last few years we’ve seen how a big man who can pass opens things up for his entire team, from Jusuf Nurkic in Portland to Karl-Anthony Towns in Minnesota.

Given Mitch’s ability to impact a game through sheer instincts, the league is going to have another beast on its hands once Robinson starts consistently understanding what he’s supposed to do and how to do it. And from what we’ve seen of late, that time is going to be here before what know it.