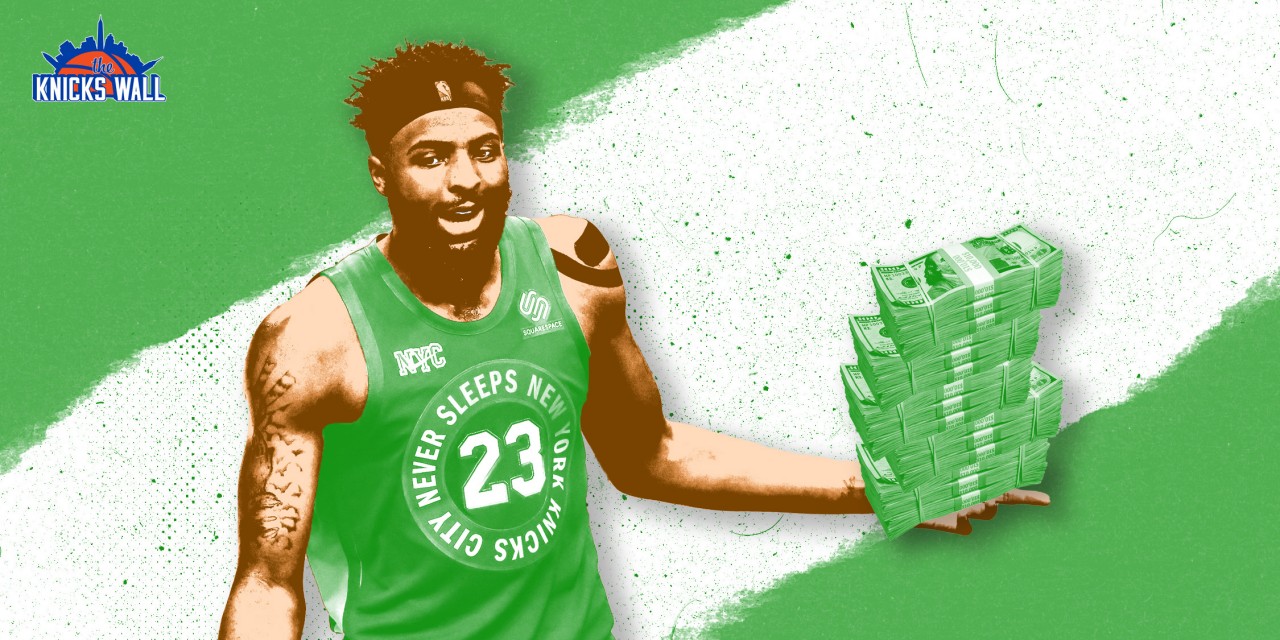 Whether they like it or not, the Knicks will have to come to a decision on how much to pay former second-round center Mitchell Robinson.

New York Knicks center Mitchell Robinson was likely ruled out for the season after he fractured the fifth metatarsal in his right foot against the Milwaukee Bucks in what was his fourth game back following surgery on a fractured right hand.

A sprained ankle cost Robinson about a month of his rookie campaign, but prior to this season, that had been the only extended period of time he had missed thus far in his career. Now, not only will Robinson likely miss his first opportunity to play in the postseason, but due to his contract status, he may also miss out on millions.

Coming out of the 2018 NBA Draft, Robinson signed a three-year $4.7 million contract with the Knicks. New York has a team option to retain Robinson for 2021–22 at the cost of about $1.8 million; however, should the two sides then fail to agree to an extension Robinson would become an unrestricted free agent.

Forcing New York to compete with other teams on the open market (after having another season to potentially prove that he can stay healthy) would be the smart move for Robinson to make. Either the Knicks pay up and devote a larger-than-ideal portion of their cap to an (albeit fantastic) shot blocker with a limited offensive game, or they let him walk right as the team is potentially coalescing around an improving R.J. Barrett and Julius Randle.

Ironically, the best way to keep Robinson in orange and blue may be to decline his team option. He would then become a restricted free agent at the season’s end, not only would the Knicks be able to match any deal he signs, but his value is likely never going to be as low as it will be following a season where he’ll likely play just 31 games.

Here’s where Robinson’s decision to forgo college is coming back to bite him. He was ESPN’s 11th-ranked high school recruit in 2017, but after a suspension for violating team rules, Mitch left Western Kentucky University to prepare for the draft on his own accord—and that’s how the Knicks were able to snag him in the second round in 2018.

If a first-round pick’s team doesn’t exercise its option to extend his rookie-scale contract following their second or third season then he becomes an unrestricted free agent, but the NBA doesn’t award that privilege to second-rounders.

To better understand how much sliding into the second round cost Robinson, look to teammate Kevin Knox’s contract. Whereas Robinson was the 11th-ranked recruit in 2017, Knox was 10th. Knox was selected ninth overall by New York and signed a four-year, $18.5 million dollar deal—nearly four times more than Robinson, who was picked 36th and has unquestionably contributed more to this team.

If the Knicks are confident in their ability to get an extension done with Robinson, then perhaps the best route would be to pick up that option and negotiate something long-term after free agency begins around August 1st. However, Robinson left Rich Paul and Klutch Sports to sign with his sixth agent, Thad Foucher of the Wasserman Group. He appears to be well aware of all the financial implications of this season and is eager to make up for the money he lost when he slid to the second round.

The Knicks do run the risk of alienating Robinson by manipulating his contract situation to keep him out of unrestricted free agency, but it’s nothing a lucrative new deal wouldn’t change. The Knicks head into this offseason with more cap space than anyone else, and not much outside of Lonzo Ball and a Randle extension to spend it on.

Offer Robinson a front-loaded deal, allow him to recoup some of what he lost over the course of his first few seasons without sacrificing too much space down the line because, despite what Robinson does bring, paying centers who aren’t named Joel Embiid or Nikola Jokic will hamstring your team going forward.

Rudy Gobert is being paid $205 million over five years, and while you may think of him and Robinson both as rim-running shot-blocking centers, Gobert’s managed to be one of the top centers in Offensive Rating this season.

Robinson won’t command anything near what Gobert got, the Knicks’ system isn’t totally built around him the way the Jazz operate around Gobert. However, Gobert’s offensive impact bodes well for Mitch’s ability to do the same going forward. Neither player can stretch the floor by shooting, but they collapse the defense as lob threats, thus creating space for teammates.

The potential is there for Robinson, and the quickest path to contributing more on offense is to get the line more and knock down those shots, but unfortunately, so far he’s actually regressed. This season Robinson is taking only 2.2 attempts per 36 minutes, down from last year’s 3.8 attempts per 36. In his rookie season, 16.7% of Robinson’s points came from the line, and that percentage has only gone down since. Meanwhile, Gobert is averaging a career-low in that department, but still earns 24.7% of all his points at the line.

Videos of Mitch draining threes in an empty gym captivated Knicks fans this offseason, but that feels like putting the cart before the horse. Get your free throw percentage (49.1% this season) up to a respectable level before you start chucking from deep.

However, despite the holes in his current game, there is a pathway towards offensive efficiency for Robinson, and Foucher will certainly be aware of his 23-year-old client’s potential when negotiating.

The Knicks aren’t looking to break the bank with the aforementioned Randle extension imminent (🤞🤞) and a Barrett extension inevitable, but the potential to satisfy an impactful young player and still maintain some degree of flexibility with a front-loaded contract makes a strong argument that rolling the KD-Kyrie cap space over once those plans fell through was the right choice.

The main obstacle for Robinson in acquiring a chunk of that free cap space may actually come from on the roster. Nerlens Noel has been better than any fans could have hoped in filling in for Robinson while he’s been out.

Noel may lead the league in turnover rate, due to the fact that he often seems to forget how hands work, but the team hasn’t lost much when he’s played, as evidenced by the Knicks being -1.0 per 36 minutes with Noel on the floor and -0.7 with Robinson out there.

Both operate almost exclusively in the restricted area on offense, and Noel is averaging 2.0 blocks per game to Robinson’s 1.5.

If the Knicks don’t fight to keep Robinson then it’s because they believe they can find players like them relatively easily. However, Robinson is young and has shown an ability to absolutely obliterate opponents’ offensive possessions. Since he entered the league, per pbpstats.com, no one has blocked more threes (44) than he has, and he trails only Matisse Thybulle, Philly’s defensive specialist, in blocked threes per game—0.31 to 0.28. A seven-footer who can alter shots from the three-point line to the rim is a unique commodity, and a valuable one in a league where switching has become commonplace, if not the norm.

Mitchell Robinson coming up BIG for the @nyknicks. pic.twitter.com/h8g4WuMTVL

The Knicks may have a firm stance on what they think a center like Robinson is worth, they may decide to milk another cheap year out of him before setting him loose onto the unrestricted free agency market if they can’t agree on an extension.

However, they have a young team seemingly on the upswing for the first time in years, a dynamic defensive piece, and total control over his contract situation (due to some unfortunate injuries.) If Mitchell Robinson isn’t locked up with New York for the next few years, then either Leon Rose and the front office didn’t want him to be, or someone in that same group really messed up.

Either way, it would be a shame to lose a fan favorite and one of the franchise’s smartest draft decisions in recent history just when the team has started to come into its own.