Mitchell Robinson: A Perennial Defensive Player of the Year Candidate in the Making 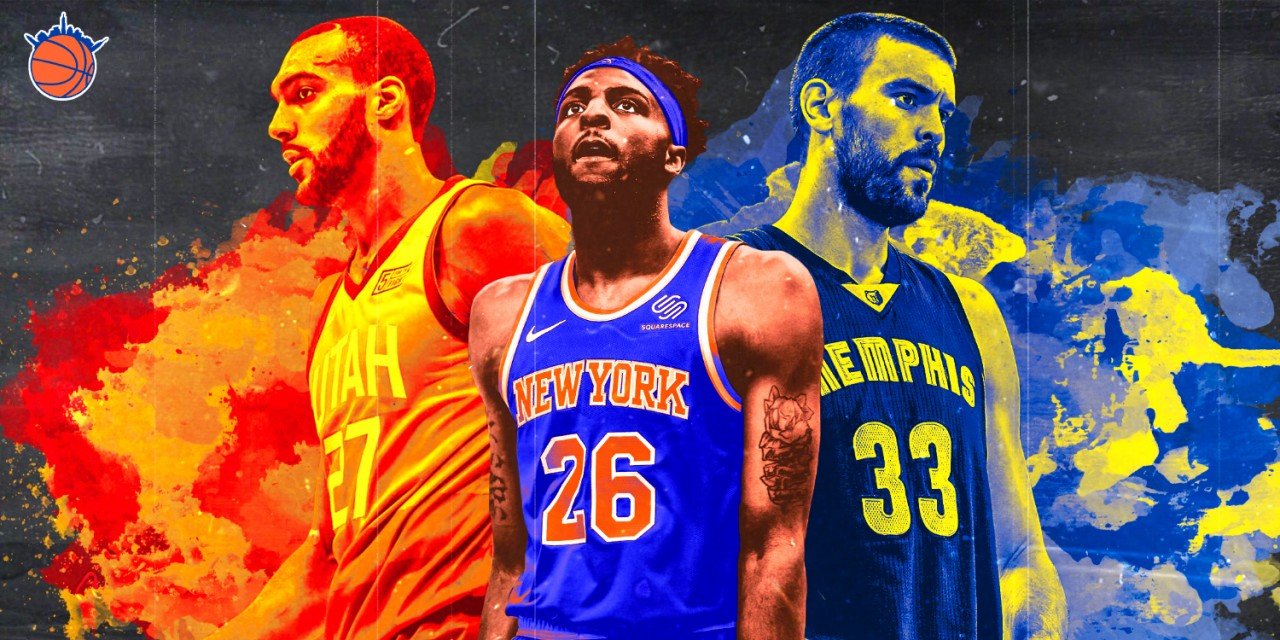 While his offensive game still needs polish, Knicks center Mitchell Robinson is on track to be the team’s defensive anchor for years.

The Knicks committed seppuku last season to nab R.J. Barrett in the draft. They were high enough on Dennis Smith Jr. to make him the principal piece in the Kristaps Porzingis trade. There’s real anticipation for Julius Randle and Frank Ntilikina, especially after the latter showed new parts to his game during the FIBA World Cup. Kevin Knox, and his lanky 6-foot-9 frame, looms under the radar, hovering over the precipice to NBA relevancy⁠. All he has to do is take the leap.

And still, I’m not sure there’s a player the Knicks are more excited for⁠—more feverish for⁠—than Mitchell Robinson.

Part of that is because of how they acquired him. After Western Kentucky University suspended Robinson before what would have been his first NCAA season, Robinson elected to forgo college and prepare for the NBA draft solo. He slipped on a lot of draft boards as a result, unusual for a seven-footer with generational athleticism, and fell to the Knicks at the 36th overall pick in the second round.

Which means there’s no risk involved here. The Knicks didn’t spend a high draft pick on Robinson. They didn’t trade anyone for him. And at a salary of around $1.5 million per year, he is arguably the best bargain in the entire league right now.

And still, it would be heartbreaking if Robinson didn’t pan out. Why? Because all it takes is a glance at the most dominant defensive centers of the past decade to see that Robinson has the chance to be one of them.

Actually, he has a chance to be better.

In fact, I’d be shocked if he wasn’t a Defensive Player of the Year within the next three years.

Let’s look at the data.

Who are Robinson’s Historical Peers?

The table above contrasts the traditional defensive counting stats of six centers during their rookie seasons. One of them is Robinson. The others have all won Defensive Player of the Year within the past decade. Some have earned the award several times.

Can you guess which one is Mitch?

Let’s assign some names to these behemoths in the paint.

With all that being said, Robinson is already in rarefied air for a second-year stopper. In similar court time, he was able to swat more shots per game than any of his historical peers, edging Gobert by a hair.

And although he often appeared weak on the glass last season, consistently getting out-muscled or out-positioned by stronger and savvier players, we can see that, with the exception of one physical anomaly named Dwight Howard, all of these bigs struggled on the boards early in their careers. All of them, with the exception of Gasol, went on to average double-digit rebound figures at some point in their careers.

But what do the Analytics and Advanced Statistics say about Mitch?

Again, it’s very difficult to quantify defensive impact. However, there is a lot more data we can examine outside of the old-school counting stats.

While advanced statistics and broad analytics can be misleading at times due to their invisible relationship with team context, the data we do have all strongly suggest that Robinson is a once-in-a-lifetime defensive prospect.

There is negligible value to isolating certain advanced statistics or analytical trends, and presenting them in a vacuum. But when there’s this much smoke, it’s foolish not to believe a fire exists. And almost everything we can analyze broadly points to Robinson becoming a DPOY very, very soon.

We’ve already covered his struggles on the glass, but his Defensive Rebounding Percentage actually finished higher than Noah’s during the latter’s rookie season, and Noah very quickly became a beast on the boards as he gained strength and sharpened his technique throughout the years.

Still don’t believe the hype? Here’s the same statistical snapshot, but instead of the five centers we’ve covered thus far, let’s put Robinson’s rookie season up on the Mount Rushmore of modern big men just to see how he looks up there.

Regression should be expected for Robinson as a shot-blocker going forward. But it’s not hyperbole to say that he was, for a rookie, the most impressive pure shot-blocker in the history of the modern NBA.

It is impossible to overstate how much potential he has already flashed on that end of the floor. Of the three “Mount Rushmore” men listed above, only Garnett, because of his similar combination of speed and length, could pull off these two plays in the same game.

Robinson climbs the ladder … then blocks a three. pic.twitter.com/shyXHwawFj

What can Mitch improve on? What can we expect out of him this season?

Robinson is obviously not without his faults on defense.

He constantly leaps himself out of position to chase blocks, or gets caught in the air by the slightest twitch from an opposing player with the ball, and lived in foul trouble as a result all season.

Here’s what his Foul Percentage looks like compared to the original five big men we highlighted.

As you can see, Robinson was the least disciplined out of this group as far as avoiding the whistle. He ranked in the bottom fifth percentile for centers in that regard.

This is perhaps the most troubling aspect of Robinson’s profile so far. Every one of those players maintained similar levels of foul discipline throughout their careers, and none of them were ever as bad as Robinson was at avoiding illegal contact.

But it’s the only thing keeping Robinson off the floor, other than stamina⁠—we don’t know how deep his gas tank is yet⁠—and poor free-throw shooting (which he vastly improved as the year went on). As far as defense, there are only two people that can hold Robinson back from becoming the most dominant shot-blocker of our lives: himself and the referee.

If he can learn more of the nuances of interior positioning, when to deter and when to stay grounded and solid, as well as team defense as a whole (lineups with Robinson didn’t defend at an elite level despite his individual contributions), he will become Gobert 2.0. Robinson has the lateral quickness to hang on the perimeter in ways Gobert will simply never be able to match, although Gobert made strides in that regard last season.

If I were a betting man, I would put everything I own into Robinson becoming the best defensive player in the league, bar none. It just shouldn’t be possible for a 7-foot-1 human being to have the quickness and athleticism to block 13 three-pointers in one season, on top of being the most fearsome rim presence in the league. He has preternatural timing and an appetite for destruction.

And as I’ve just laid out, he already projects to become an all-time level defender. Doubt him at your own risk.