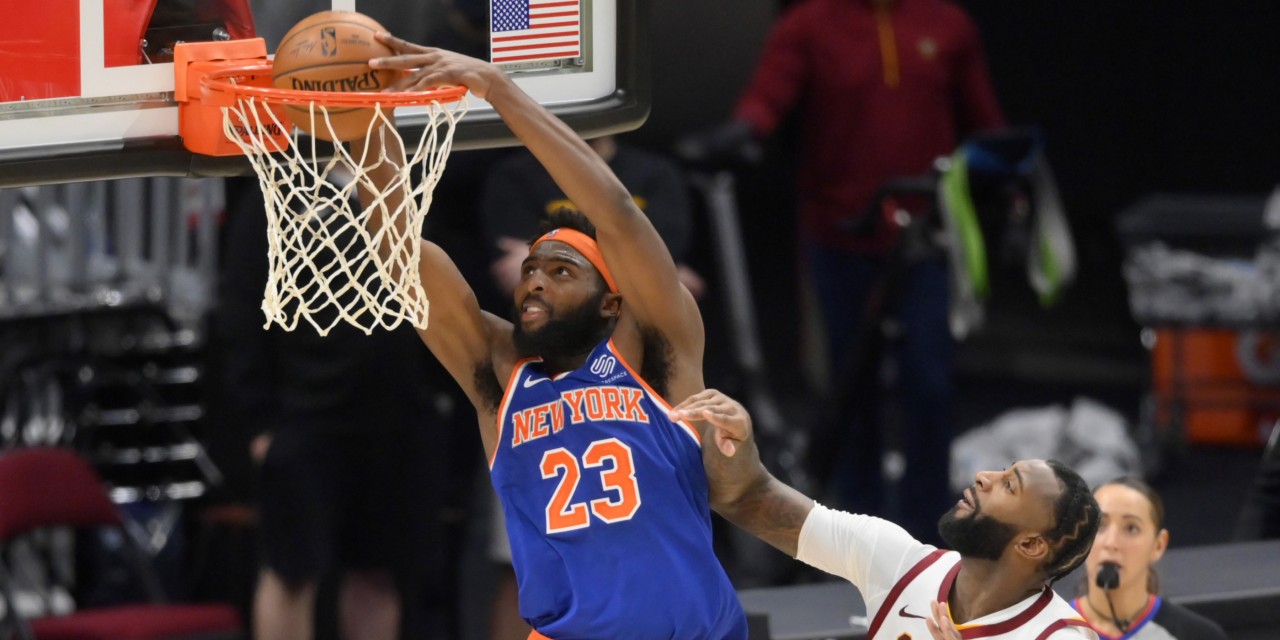 Mitchell Robinson could step on the court again for the Knicks on Sunday for the first time in five weeks. And not a moment too soon.

Mitchell Robinson is back and not a moment too soon. The New York Knicks’ defensive anchor has been cleared to play and can return to the lineup as early as tonight against the Philadelphia 76ers. The Knicks fared well during the 15 games Robinson missed, going 9-6, the thin rotations were reaching their breaking point. The addition of Robinson is not just a lifeline for depth, but a much-needed shot of adrenaline for the defense.

Nerlens Noel has performed admirably during Robinson’s absence, minimizing the impact of what could have easily been a derailing injury to a roster of which Tom Thibodeau was squeezing every ounce out. At the time of his injury, the Knicks were the best defense in the league. Noel has helped keep them in the top five, but the defense did slip without Mitch, falling to the 10th-best defense over the last 15 games. The slippage could be credited to the lackluster second unit more than anything the starters have done.

The common theme in the team’s close losses to the Brooklyn Nets and Sixers was the second unit. Their ineptitude relieving the starters has caused the starters to play the full way for the most part, which naturally has cascaded to tired legs during winning time. It could be that very reason Robinson could start out with that second unit. Thibodeau hinted at that possibility following the news of Robinson’s return.

Thibodeau says plan is to eventually put Mitchell Robinson back into the starting lineup. Even if that doesn’t happen right away. https://t.co/qSqTIYjjXH

Thibodeau has had to leave Obi Toppin in the rotation despite clear struggles, mostly because there were not many options. Taj Gibson has held it down, but the upgrade from Robinson is seismic. A defensive force like Mitch might free Thibodeau up to make the Kevin Knox for Toppin switch he has not been ready to make. Gibson and Knox could split time next to Robinson. Knox’s familiarity playing with Robinson could give the team the boost they have needed over the last few games.

Once he rejoins his proper place with the starters he will be returning to a different world. Immanuel Quickley may be the new full-time starter. R.J. Barrett and Julius Randle—known to people in the know as the Lucky Lefties—have hit another gear as a scoring duo; the duo leads the team in scoring over the last 15 games and both shooting at or close to 50.0% from the field.

Then there is the reemergence of Frank Ntilikina. Thibodeau has made note of Ntilikina’s value to the team, which also means Robinson’s return brings us one step closer to the lineup of Knicks Twitter’s dreams: Quickley, Barrett, Ntilikina, Randle, and Robinson.

Another reason to love the timing of Robinson’s return is the troubling trend that developed over the past few weeks. The team was sniffing around on players at Robinson’s position. Andre Drummond viewers continue to find their ways into the universe, and some Myles Turner reports also made rounds.

It is important to mention that Robinson’s name or possible exit has not been reported at all as the reason for the Drummond or Turner rumors. And they are, after all, just rumors. But for anyone who has followed the Knicks for any amount of time you are always waiting for that second shoe to drop.

Robinson seemed poised to break the Charlie Ward curse. In one of Leon Rose’s rare public appearances, Rose mentioned Robinson by name as a player the team would build around, along with Barrett. Barrett remains at the center of the front office’s mind in terms of a long-term outlook, only instead of Robinson and Barrett, it is now Julius Randle and Barrett that comprise the team’s innermost core. The ever-so-slight change in importance to the front office is no fault to Robinson. He is still the third-best player on this team and a crucial cog to everything Thibodeau wants to do.

That is why it is vital that Robinson remind the front office of the type of player he is. While the rumors of interest in Drummond and Turner could be classic due diligence there are two reads on it: the front office could be assessing the value of other bigs in preparation of extension talks with Robinson, or they want to add a better scoring threat in the frontcourt.

In the Drummond rumors, in particular, The Athletic’s Shams Charania reported the team could offer the New York native a multi-year deal if/when he is bought out by the Cleveland Cavaliers. It would be safe to assume the interest in Turner would be long-term just as much as short-term. It would also mean Robinson’s not as big a part of the turnaround than we expected.

No players should be completely unavailable, but moving on from Robinson for marginal improvement would not make a lot of sense. If for whatever reason the team feels like a more offensive-minded big fits with Randle and Barrett, then go big. Make that superstar chase for Karl-Anthony Towns. It sounds silly until you realize the connections and ability to pay a handsome price, and Towns’ willingness to return home.

The Minnesota Timberwolves are still a very bad team and will remain a very bad team for at least one more year, probably more. All that losing has to start to weigh on you, and if William Wesley sees an opening, you better believe he will make a play, with the blessing of Thibodeau.

That is the type of move you would make to move on from Robinson. Otherwise, let this thing ride out. The chemistry with this team is evident, no other team celebrates a game-winning steal like this.

The energy is becoming special, and Robinson wants back in as soon as possible.