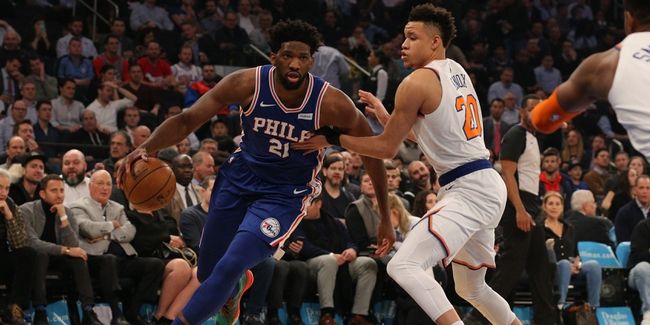 Flashes of greatness from Mitchell Robinson weren’t enough to fuel a Knicks comeback on shaky foundation in the latest loss Wednesday to the Sixers.

Damyean Dotson had a strong start in the first half, shooting 6-of-7 in his first eight minutes of action. He shot 2-for-2 from beyond the arc as well. The floppy plays and curl screens seemed to finally work out for the second-year player. The swingman’s 14 points in the first half were the most by any Knick in the game.

Mitchell Robinson had himself a night, notching his third career double-double. He impacted the game on both ends, per usual. With 14 points, 13 rebounds, and four blocks in his stat line tonight, his development has been one of the only silver linings of the Knicks season. He’s shown monstrous growth, culminating in his play tonight. The block on Embiid was a “Is this your king?” moment.  The emphatic denial set the crowd ablaze. Yes, that one, but the other one too.

The Kevin Knox shooting guard experiment appeared fruitless probably due to the unconventional lineup that the Sixers employ. Against another team, he may have more success, but he shot 40 percent from the field and a mediocre 1-of-4 from three tonight. Overall, his game wasn’t that great, but his poster on Ben Simmons is a highlight play for the ages.

The Knicks finish their pre–All-Star break run with a matchup in Atlanta against the Hawks tomorrow night.