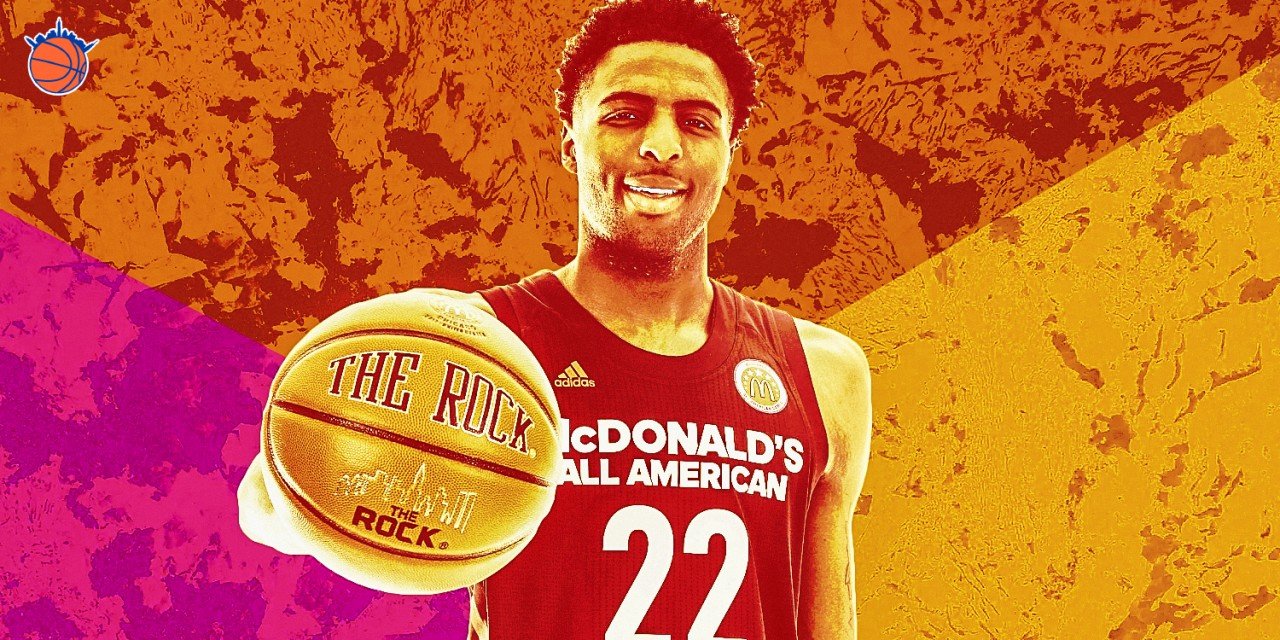 For high school stars like Darius Bazley and R.J. Hampton, Mitchell Robinson could be the pioneer in forgoing a one-and-done collegiate season to prepare for the NBA Draft.

When the Knicks selected Mitchell Robinson with the 36th overall pick in the 2018 draft it was both a leap of faith and calculated risk.

Robinson opted to spend his 12 months leading to the draft training on his own versus playing at Western Kentucky University. The decision was a big one. Robinson was a five-star recruit, ranked 11th in his class, who would almost certainly have been projected in the first round had he played for Western Kentucky.

Without college or G League tape—because Mitch enrolled at WKU he was technically ineligible to play for a G League team–NBA scouts had to go off his high school career. The numbers were impressive—25.7 points, 11.6 rebounds, and 6.0 blocks per game—but high school performance, while important, is nowhere near the level of college or semi-pro ball.

Thankfully the risk taken by the Knicks and Robinson paid off in a big way. He put together a stellar rookie season, and is now the best building block the team has, at a much cheaper cost thanks to his draft slot.

At the time, Robinson’s roundabout route to the NBA felt like an outlier. There was no way to predict Robinson’s coach leaving Texas A&M for WKU and Robinson deciding college was not for him.

Mitchell immediately became a disruptor on the court, tallying 161 blocks his rookie season. But a year after he was drafted, another top prospect, Darius Bazley, can turn Robinson into a disruptor off the court as well.

Like Robinson, Bazley was a five-star recruit (ranked 13th in his class) poised to go to Syracuse after de-committing from Ohio State. Bazley ultimately turned Syracuse down too, opting to join the G League before turning them down as well.

Instead, he opted to use the year to train, just as Robinson had. The key difference is: Bazley chose the path Robinson stumbled on—a major reason Bazley has received all that backlash Robinson never had to deal with.

Part of that backlash can be credited Bazley’s agent being Rich Paul, Entourage‘s Eric Murphy come to life and public enemy number one to the institutional hoops culture. Paul himself is a disruptor; he has used his resources to help steer his client in the right direction.

Unlike Zion Williamson, R.J. Barrett, and other college stars who drew millions of dollars in revenue for their colleges and made zilch, Bazley made $1 million in three months. In addition to training for the draft, Bazley interned for New Balance. He learned about the business side of basketball while using their facilities to work out.

He was one of the first players to enter the 2019 draft, and impressed scouts during the combine and at Klutch Sports’ pro day.

Darius Bazley showing off his athleticism and near 9-foot standing reach at the Klutch Sports Pro Day. Barely needs to jump to dunk. pic.twitter.com/58Ph98BW4v

He, like Robinson, is a raw prospect. He is a 6-foot-9 blank canvas with a 6-foot-11 wingspan. His handle, athleticism, and explosive hops could be molded into a versatile point forward. The potential is clear as day when you watch him.

That rawness comes at a price. Bazley will likely also share something else with Robinson—he will go much lower in the draft than he would have had he played for Syracuse. With a much smaller sample size to go off of—mainly open gym runs and a few combine highlights—teams may feel safer having more tape on other guys.

The Knicks, who hold the 55th overall pick, are sure to have him on their radar. If he is there when they pick, the potential for another steal is high.

If Bazley turns out to be another diamond in the rough, the paradigm will certainly begin to shift, if it hasn’t already.

Bazley’s fate may influence future top prospects to follow his path, even when the NBA lowers the draft age back down to 18. If he shows promise early on, like Mitch, there is an argument to be had about training a full year versus putting your body on the line for free.

R.J. Hampton has taken Bazley’s path a step further. Hampton became yet another five-star prospect to chuck the deuces up to college. His case is even more extreme, as Hampton was a top five prospect with his choice of blue blood programs.

He opted to sign with the NBL’s New Zealand Breakers. Hampton cited his dream is to play professional basketball, and playing in the NBL will better help him prepare for the NBA. He also mentioned the success of Luka Doncic, who played for Real Madrid as a teenager before coming to the NBA.

Player empowerment has clearly filtered down to the amateur level. If Bazley and Hampton enjoy the success Robinson enjoyed this season, there could be a new avenue for high school players to control their own destiny.

»READ: Would abolishing the draft benefit the Knicks?