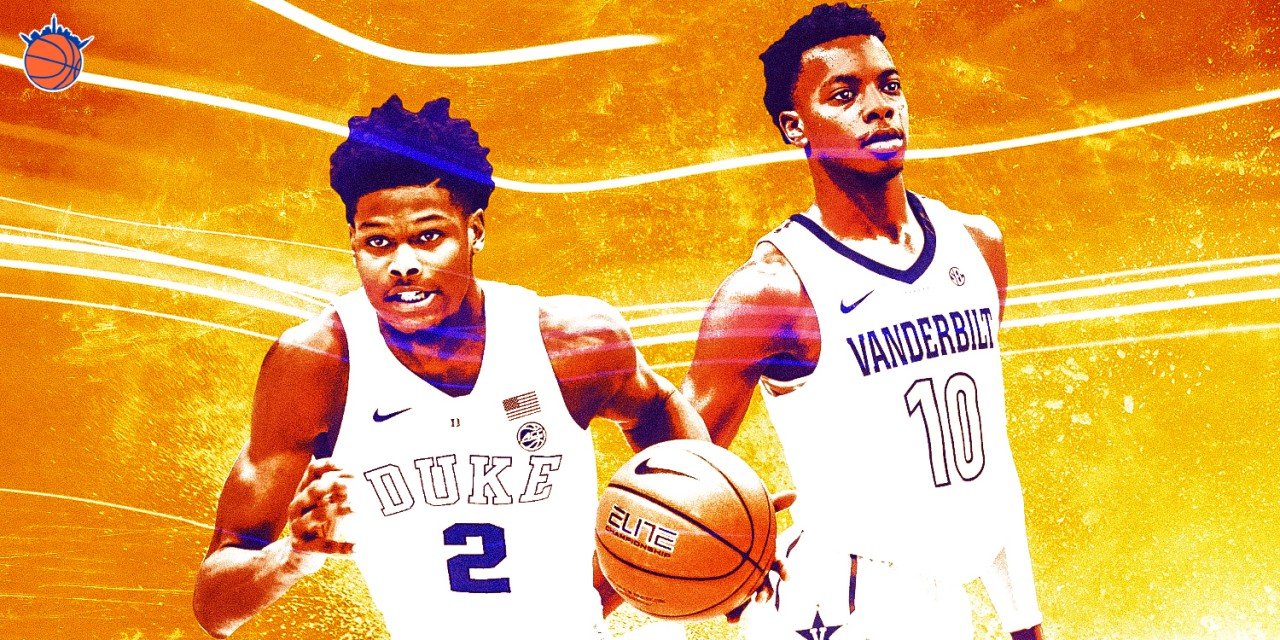 Four of The Knicks Wall’s draft coverage contributors were given lottery teams to control in the NBA Draft. How did the draft shake out?

The 2019 NBA Draft is considered a three-player draft by most. With mounting uncertainty in the lottery, anarchy is inevitable.

To attempt to forecast what could end up being a truly wild first round, we turned to four of our agents of chaos, Quentin Haynes, Eli Cohen, Harley Geffner, and Mike Cortez to make sense of the first 14 picks.

All four were given control of the lottery teams. Trades happened. Risks were taken. Feelings were hurt. Chaos ensued.

Zion Williamson, forward, Duke: The best player in the 2019 NBA Draft, Williamson fills multiple roles as a defender and pick-and-roll talent. He even knocked down nearly 34% of his threes last season. Pair Zion with Anthony Davis and Jrue Holiday, and New Orleans has a formidable trio to build around for the foreseeable future. — Quentin Haynes

Ja Morant, point guard, Murray State: Phoenix rights the wrong the lottery gods bestowed upon them. Despite a strong 2020 guard class, the clock has to be ticking on Devin Booker’s patience. The Suns gave him that big extension to win now. Ja gives the Suns their facilitator and creates a big three of Deandre Ayton, Booker, and Morant. At the very least that’s fun. — Mike Cortez

R.J. Barrett, shooting guard, Duke: Let’s not overthink this. Barrett has some holes in his game (as people love to point out), but he’s got arguably the safest floor while still having considerable upside. He’ll never be the top player on a championship team, but he has the making of a really solid second banana if he can smooth out his shot and tap into his considerable physical gifts on the defensive end. R.J. loves the spotlight, and with the Knicks, he’ll get it. — Eli Cohen

Darius Garland, point guard, Vanderbilt: Jarrett Culver should be the pick here, but the Lakers are a circus act. Darius Garland does bring much needed shooting (63.9 eFG%) to a team deprived of it last season. The jury is still out on Garland as a lead guard, which is why pairing him with Lonzo Ball makes it a smart gamble. Also, Garland is a Klutch Sports guy—need I say more? — MC

Details: Cleveland trades the fifth pick to Chicago for the seventh pick and PG Kris Dunn

Jarrett Culver, shooting guard, Texas Tech: Thanks to Vlade Divac, Zach LaVine will be entering the second year of his massive contract at the start of next season, so the fit with Culver isn’t perfect. But as GM of the Bulls, I’m looking at a future with Culver, Otto Porter Jr., Lauri Markkanen, and Wendell Carter Jr., and liking what I see: a two-way core that can play five (four in this case) out without sacrificing size.

Can LaVine and Culver eventually split ball handling duties? I’m not convinced, but Culver’s upside is too much for the Bulls to pass on. And hey, maybe a team hard up for scoring can be convinced to take a swing on LaVine. — EC

Coby White, guard, North Carolina: Having secured a great 3-and-D wing in Mikal Bridges from the Suns—who has already proven himself capable at the pro level—to pair with Jaren Jackson Jr., Memphis turns its attention back to the point guard position, where it’ll need a successor to Mike Conley. Ja Morant was the ideal pairing, but grabbing Mikal and a first-rounder from the Suns was too tempting, and rejecting an offer like that would have been team-building malpractice. There’s a good chance the Suns are bad again next year, meaning that pick could potentially convey unprotected in a loaded 2021 draft. Memphis isn’t ready to compete yet, so stockpiling assets is the smartest move here, and if that pick conveys in 2021, instead of 2020, it has a chance of ending up the best piece in this trade.

For now, Conley works as a perfect mentor to White as they both have the ability to change speeds or stop on a dime to quickly to create a shot in a pinch. Conley can work with White on identifying more high-level reads after doing things like splitting defenders on a screen and roll. White is an aggressive on-ball defender, sometimes to a fault, and he’ll really need to improve his defensive awareness to be even neutral off-ball. He fits well with what the Grizz are trying to do, and gives them a nice young core moving forward. Bridges and JJJ can both stretch the floor so White has space to operate, and he has two young, high-level defenders behind him on the other end. Plus they’re armed with a huge draft asset from Phoenix’s dumb front office. — Harley Geffner

Brandon Clarke, forward, Gonzaga: After moving back two picks, the Cleveland Cavaliers are in a bit of a pickle in terms of need. Therefore, they go with the best player available. Clarke will need to improve as a shooter, but if he puts it all together, we could be looking at the next Paul Millsap. As Cleveland reorganizes the roster, Clarke can provide valuable minutes alongside Kevin Love and serve as defensive protection for Collin Sexton. — QH

Jaxson Hayes, center, Texas: The real choice here was between Cam Reddish and De’Andre Hunter, and the Hawks have them neck and neck as great 3-and-D wing archetypes to pair with Trae Young. Hayes was going to be the 10th pick (since Clarke was taken), but it was a surprise that one of either Cam or Hunter hadn’t already been taken off the board up to this point. So one of them will still be available at 10, thus making this Hayes pick more palatable at eight.

Hayes’ fluidity as a big man and soft hands will make him a great lob target for Young. He’s definitely still a project, and is less ready than someone like Jarrett Allen was. His skill set pairs nicely with John Collins on O as Atlanta can run a lot of screen options where Collins would pop and Hayes would roll. On defense, hopefully Hayes can put on enough strength to cover for Collins’ weaknesses on that end. — HG

P.J. Washington, forward, Kentucky: Between John Wall’s injury concerns and Bradley Beal’s future with the organization, the Wizards are all over the place. P.J. Washington offers a big wing who could affect the game on both ends. Washington teeters the line of power forward and small forward, but could use that versatility to find a role in Washington. — QH

Cam Reddish, forward, Duke: Well, Atlanta still gets their pick of name-recognition wing prospects. This is a close one, but the Hawks ultimately trust their scouts’ read that Reddish’s struggles shooting at Duke were more slump than full-scale slide. Have you seen the guy’s shooting form? He should be able to tick that three-point percentage up in the pros and space the floor for Trae. He won’t have many creation responsibilities off the bat, allowing him to focus on his shooting, giving him the energy to really exert on the defensive end, where his impact can be felt, covering for one of the worst defenders in the league in Young.

Atlanta now has a nice, green lineup of Trae, Huerter, Reddish, Collins, and Hayes to run out next year. The defense will still be a big problem initially, but one that can potentially be drafted for with the 35th, 41st, and 44th picks they still own in this draft.

Atlanta is currently working the phones, trying to move all three for a pick in the 20’s to nab Auburn’s Chuma Okeke. If he’s taken by the mid-20’s and the Hawks are left with Washington’s Matisse Thybulle in that range, the offer then centers around only two of those three picks. Especially since they can almost certainly still grab one of Da’Quan Jeffries or Charles Matthews, who both project as plus defenders, by holding on to 35. — HG

De’Andre Hunter, forward, Virginia: Hunter steps in and gives Minnesota three things they desperately need: size on the wing, elite defense, and three-point shooting. He also gets to learn from one of the best in the business in Robert Covington. Hunter may be too small to play the 4 for extended minutes, but between him, Covington, and Josh Okogie, the Wolves suddenly have all kinds of athletic, defensive-minded wing combinations to throw out there. And if Hunter proves himself ready for more minutes, Covington’s contract is one of the best in the league and could be a great asset in a future trade, either for a point guard or to get off Andrew Wiggins’ ridiculous contract. — EC

Sekou Doumbouya, forward, France: The French connection plays a huge role here. Sekou is raw and will need time to adjust; in Charlotte he will be able to learn under fellow Frenchman Nic Batum. Adjusting to the league may be difficult, especially for a guy who played 18 minutes a night for his team in France. Batum gives Doumbouya a piece of home to help smooth that transition. The Hornets usually miss on their picks, but given the 3-and-D potential Sekou possess, it’s a pretty easy choice. — MC

Kevin Porter Jr., guard, Southern California: The Miami Heat could use some upside and at this stage in the draft, and Kevin Porter Jr. offers the most. A lethal scorer, Porter Jr. also offers Miami a solid creator (2.3 assists per 36 minutes) and defender. KPJ is another fine offensive weapon who could blossom if he takes to the system well. — QH

Grant Williams, forward, Tennessee: The Celtics get their Al Horford insurance in Grant Williams, a smart power forward with incredible instincts for passing—and strong on the defensive end. He has a lot of shooting upside too. His physical profile isn’t too inspiring, since he’s small for his position and lacks real burst or big athleticism, but the Celtics run the exact type of system that will allow Williams to play to his strengths and more organically refine his areas for growth. This is a perfect fit. — HG

This year’s draft is almost guaranteed to be an especially dramatic affair. It’s likely there are multiple first-round trades, and as is the case with most drafts, accompanied by epic rises and devastating falls down the boards. That uncertainty is reflected here, with a couple desperate teams (Chicago, Phoenix) taking big, home-run swings, some (New York, Atlanta) playing it safe, and some (Cleveland) negotiating themselves into a corner that could either pay off spectacularly or blow up in their faces.

No mock draft is entirely prescient, but this is an example of how the draft night chaos could potentially unfold.

Be sure to listen to The Knicks Wall’s mock draft crew explain their picks and how the draft unfolded in greater detail with TKW Draft Szn’s, the limited-edition podcast, accompanying episode.

»READ: What can the past teach us about trading back in the draft?

»READ: Will Cam Reddish make teams regret passing on him?