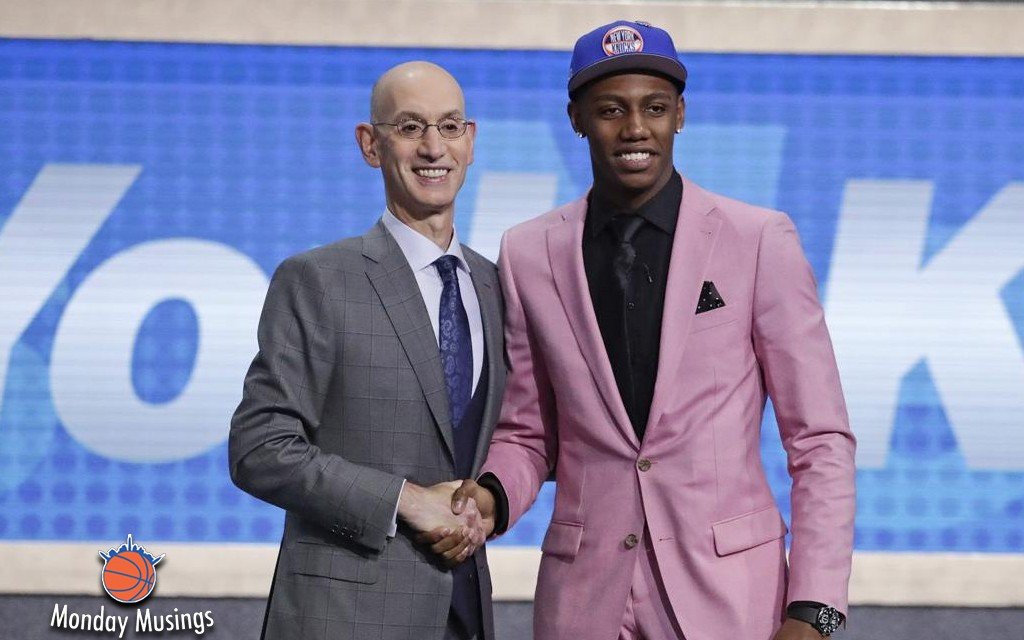 With the 2019 NBA Draft in the books, suburban dad Charlie Zegers offers his reaction in a Friday Knicks edition of Monday Musings.

The taskmasters at The Knicks Wall asked me to write a reaction to the draft—possibly because I’m not nursing a hangover from last night’s draft-watch party-slash-pub crawl. (Oh, sure, give the job to the guy with kids who lives off in the suburbs). But in all honesty, it’s hard to muster much of a response.

They did exactly what we all knew they were going to do.

Scott Perry drafted R.J. Barrett. That selection has been more or less inevitable since lottery night. Sure, we pretended it wasn’t for a little while. We freaked out over reports that the Knicks were going to trade down, or go off-script and take a flyer on someone like Darius Garland. But in the end, the Knicks, picking third, drafted the consensus third-best player in this class.

Sort of anti-climactic, isn’t it?

They didn’t even trade Frank Ntilikina, despite Marc Berman’s best efforts to run the French Prince out of town. (Seriously, did Frank kick BOTP’s dog or something?)

Don’t get me wrong. I’m thrilled to have Barrett on the team, for all the reasons that have been covered, at length, over the last month-plus. He projects as a legit scoring wing. He’s said all the right things. He seems to be a real gym rat who is aggressively working to get better. Steve freakin’ Nash is his godfather.

I’m sold. But I’ve been sold for weeks now; actually seeing Barrett in the pink suit and Knicks hat doesn’t change anything.

I will defer to my man Bryan Gibberman—a Michigan basketball stan of the highest order—for an opinion on second-round pick Ignas Brazdeikis, but based on Scott Perry’s record to date with second-rounders and undrafted free agents, I’ll assume he’s got some potential.

I’m eager to see what happens next.

As I’ve said a few times, both in this space and on Twitter, so far, Perry’s biggest accomplishment is that he hasn’t done anything wrong. And for a Knick executive, that’s progress. But starting today, “don’t do anything wrong” isn’t an option any more. Perry’s next set of decisions will determine the direction of this franchise for years to come.

Does he chase Durant, knowing KD is out for at least a year and there’s no guarantee he’ll be the same player when he does return? Does he opt for a slower, more traditional rebuild around Barrett and Mitchell Robinson and Kevin Knox and Dennis Smith Jr. and hope that one or more of them blossoms into an elite-level talent? Does he split the difference, possibly using some of his cap space to acquire a younger veteran like Tobias Harris or D’Angelo Russell; someone who can develop along with the kids already on the roster? Does he panic and throw big money at the second-tier free agents? (I actually don’t think he’ll do that, but the possibility is out there.)

»READ: For the Knicks, the age of R.J. Barrett begins

»READ: Knicks select Ignas Brazdeikis in the second round