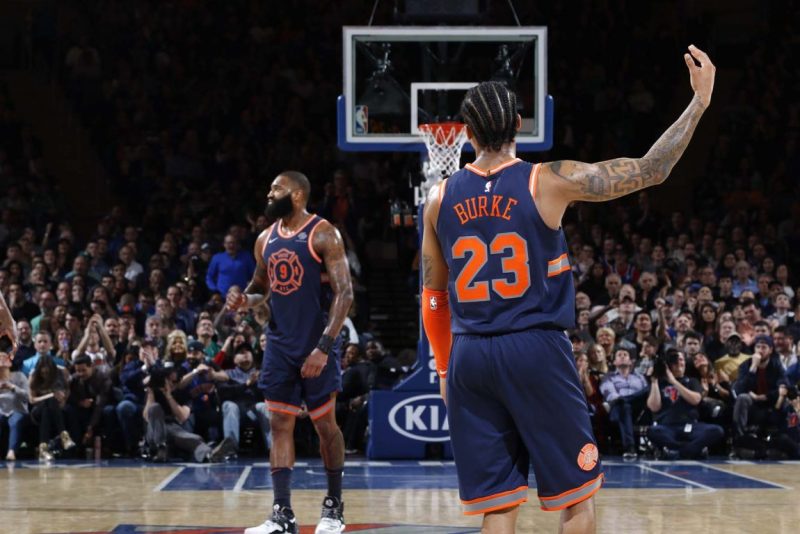 The Knicks had an abbreviated week thanks to the prior All-Star festivities, but they were back in action with promising developments littered throughout the organization.

The tank may have taken a bit of a halt during a trip to Orlando for the Knicks, but given the results from the players needing maturation during the final stretch, it’s hard to get that upset about one measly win. Cast away guard Trey Burke put up 26 points in back-to-back games, validating those that have pushed for his inclusion in the rotation since he was called up from Westchester. Frank Ntilikina and Emmanuel Mudiay, the new starting point guard, have been receiving the playing time that they so desperately need. Damyean Dotson has played sparingly, but those minutes have not been exclusively in crunch time. New addition Troy Williams put together an impressive effort in Saturday’s game against Boston. Go down the list, and it’s hard to be wildly upset with anything going on with the Knicks right now considering their precarious situation. I’ve noted before that Jeff Hornacek and management may have some sort of handshake agreement that benefits both sides if he was to play the young guys, but give him credit for following through on his promise to go young.

I would like to give a shout out to my ninth grade English teacher for this one, a teacher that I did not like at all but forced us to read a book called “The House on Mango Street.” I remember disliking this book with such a burning passion that I vowed to never forget the term associated with it, since it was a coming of age story. That term? Bildungsroman.

The most notable storyline surrounding this team is undoubtedly the play of the young New York guards. Trey Burke’s explosion came on the heels of Jeff Hornacek playing him over 25 minutes in back-to-back games for the first time all season, giving him a chance to shine. The beautiful thing about Burke’s game has been not his ability to score but his effort on the defensive end:

Watch Trey Burke stay with Kyrie on defense, before putting on the moves on offense. Doing it on both ends pic.twitter.com/qk1FCnVA7V

A smaller player, the Michigan product has never been known for his defense. Listed at a generous six-foot-one, it’s understandable to associate Burke with a “flash without true substance” type of game. However, a big part of defense is putting in the effort, and Burke has been doing just that as of late.

For Emmanuel Mudiay, the struggles that have checkered his reputation throughout his career have remained. He is shooting 37 percent from the floor as a member of the Knicks, and they also tighten up defensively when he hits the pine, per Basketball Reference. The lineup of Mudiay-Hardaway Jr.-Lee-Beasley-Kanter has a bothersome -10.7 net rating, specifically struggling on the offensive end. The sample size on these lineups are small, but the results haven’t been pretty so far. We knew this going in, and there can be no complaints in Mudiay exhibiting the growing pains we all knew he would go through.

For Frank? Whenever he does anything positive, my heart skips several beats. Several. I nearly had to be resuscitated after this.

Ntilikina with the drive and the layup!

It’s the flashes of aggressiveness from Ntilikina like this that we see that make us believe in him. He spent his whole life up until now as a member of a French team, one in which he was not the focal point and often deferred to his teammates. Once he gains the confidence to take jumpers off the dribble, to drive to the hole with a purpose, then we’ll be able to know if his offensive game has the type of upside we all hope it does.

Jack sat the entire game in Orlando. An aberration, perhaps? Well, back at the Garden versus the Celtics Jack cozied up on the bench again. A welcomed sight for those pushing greater playing time for the younger guards:

After facing the Warriors tonight at MSG, the Knicks will head out west to take on the Clippers, Kings, and Blazers before making a pit stop in Milwaukee and then returning home. Strangely, the Knicks play tonight but then won’t play again until Friday, meaning that they will be on the road for almost two full weeks. Their first home game after the matchup with the Warriors is March 11 against the Raptors. Sounds like a ripe opportunity to lose some games! …

Tank You Very Much

…which won’t matter because the Knicks were too good. I know, I know, the phrases “Knicks” and “too good” shouldn’t go together unless we’re living in 1973 or the Drake song comes on over the speakers during a game, both of which are out of my controlla.

The Knicks may be tanking, but they banked too many wins earlier in the year to make falling much further a realistic expectation:

Barring an unforeseen winning streak from the Bulls, the Knicks should grab a coffee, cuddle up on the couch, and learn to love that ninth spot like it suggested watching The Wire instead of Friends. Some lottery luck would be long overdue for this team, but the best we can do for now is take a look at the prospects that will likely be around during that ninth spot. Here’s how I see the draft playing out if given the current order:

That’s the roughest of guesses, but I’d feel confident in saying that there’s a decent chance that those are the first seven players taken. Wendell Carter could be passed up in favor of some other players. Young could fall out, but I’d bet his assumed fit as the quintessential NBA point guard in 2018 keep him up there. The Knicks will likely be looking at choosing from the group of Wendell Carter Jr., Mikal Bridges, Miles Bridges, Collin Sexton, or Kevin Knox. Those are the players that you should be reading up on and watching if you’re curious as to who will become the next first-round pick to not get a second contract from the Knicks (notwithstanding the Hardaway loophole). I kid! I have high hopes for a lot of these players, and if you want to take a look at Mikal Bridges, Sexton, and Carter, we covered them on Saturday right here. Now is the perfect time to start following the college kids if you haven’t already started to.

Happy Birthday to You

Do we think the Knicks really love Joakim Noah like this? Or did he promise them some of that fat contract if they all wished him a happy birthday?

did joakim make them do this pic.twitter.com/g6nSqZsMHE