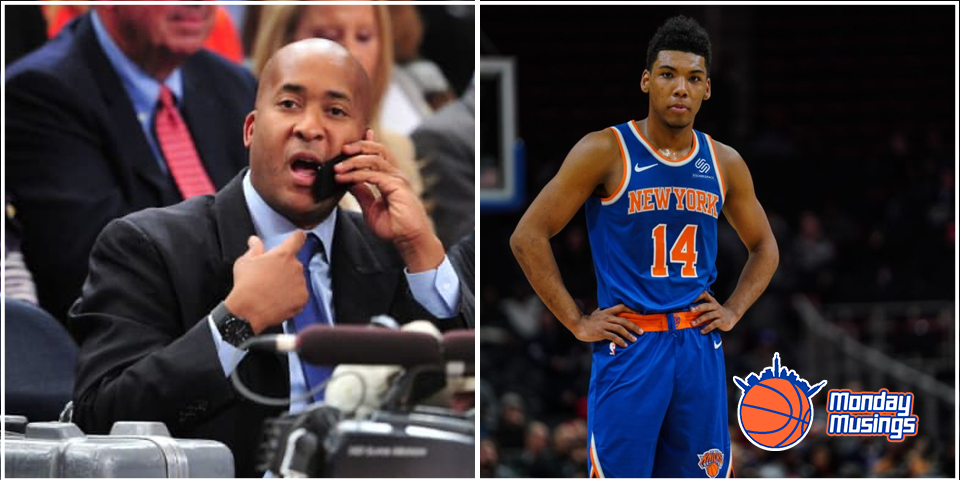 Life is about balance, and the New York Knicks exemplified that with a flurry of news. The first was met with universal acclaim: the hiring of William Wesley as senior advisor.


On Friday, the team made a tough decision and parted with Allonzo Trier, which was not met with the same consensus from the fans. There was a loud section apathetic about the move and a loud section who were upset that Iso Zo had left the building.

Count me as part of the latter group. In the grand scheme of things it probably won’t have much of a long-term effect on the team, or even immediate. This isn’t even about Theo Pinson, who was pretty productive for Long Island Nets in the G League and could offer more of a two-way option off the bench. This is about the organization’s complete punt on Trier after a promising rookie season.

As a rookie, Trier shot 39.4% from deep and lived up to his “Iso Zo” nickname. At times he saved the Knicks with spark plug performances. The irony of a Net being the reason for the end of his Knicks career is funny given his success against the crosstown rivals.

That game, from the beginning of last season, was the distilled version of what Trier should’ve been in New York. One thing I appreciated about Trier was how clearly he defined his role; he was a microwave scorer to the core, a hired gun who could step in when everyone was cold and catch fire. His 22-point night in Brooklyn helped turn a game that felt like an easy Nets win into a game that required Kyrie Irving to hit a beauty of a buzzer beater over freshly NBA-installed newbie R.J. Barrett.

There were a lot of games like that night in Brooklyn this season, and yet Trier appeared in only 24 of them. He loved to score—there was never a doubt about that. Trier was so locked in on offense he once dunked on a defender in the middle of an earthquake.

Zo Trier dunked on somebody during an earthquake. Legendary. pic.twitter.com/n0JX1oW53c

The addition of Barrett, Wayne Ellington and Reggie Bullock left him in rotation limbo. David Fizdale lacked a clue on how to build a steady rotation, even starting Trier at shooting guard opening night then banishing him to the bench for the remainder of the season.

In the few appearances Trier did have he rarely cracked 20 minutes. A reason for that was his lack of interest in defense or passing the ball. One thing I refuse to do is buy the lie that his poor defense should have resulted in little to no minutes, especially when your team is the 27th-best three-point shooting team and second-lowest scoring team in the league. I’m not buying that Trier couldn’t change his ways and share the ball a little more. Instead, he was left to rot on the bench and is now gone.

And if you were out on him or clearly had no room for him in your future plans, at least try and get something for him. Trier racked up 31 DNP’s prior to the trade deadline, falling out of favor with Fizdale and never winning over Mike Miller. If that were the case, why not shop him for anything? Even Willy Hernangómez yielded a pair of second-round picks.

Again, it isn’t a major moment in franchise history nor is it a step back going into next season. But it was a reminder of the team’s baffling inability to retain young players. Up next could be Kevin Knox, who suffered the same limbo situation as his classmate.

If you disagree, just think back to a year ago when Trier was being talked about as part of the exciting young core with which the Knicks were rebuilding. Now he is just another former Knick who has the tools to be productive on another team starving for instant offense.

The hiring of William Wesley was a rare occurrence: a decision by the front office worthy of praise. Wesley was called the “biggest” free-agent signing in franchise history by ESPN’s Jay Williams. Clearly Williams was being hyperbolic, but there is no downplaying the significance of having a power broker like Wesley in the fold.

Wesley’s presence can get the Knicks conversations they weren’t even being granted by stars—Kevin Durant in 2014 and Kawhi Leonard last year for example. Those days could be over with Leon Rose and Wesley now representing the Knicks.

It’s always about the big score with James Dolan in the end. Patient rebuilding is a ruse for Dolan’s ultimate directive: landing a star player.

With Wesley, the Knicks could set their targets on Devin Booker—both a CAA client and Kentucky alum—once the Phoenix Suns eventually break his patience. Anthony Davis could grant the Knicks a meeting out of respect. The possibilities, for once, have an ounce of realism.

It was a rough week for the pair of Arizona Wildcat alumni. Allonzo Trier was cut on Friday and Kadeem Allen was cut the day before.

Allen was one of the team’s two-way contract players and had some solid moments on the main roster, averaging 9.9 points and 4.0 assists per game in 19 appearances to end last season.

Replacing Allen as the other two-way player, along with big man Kenny Wooten, is former Phoenix Suns guard Jared Harper. If you are unfamiliar with Harper, he was the speedy guard R.J. Barrett had trouble staying in front of during the Canadian’s Summer League debut in 2019.

Harper was impressive for the Suns’ G League affiliate, the Northern Arizona Suns, averaging 20.6 points, 5.7 assists, and 1.2 steals per game, shooting 41.3% from the field and 36.2% from three-point range. The expectation for Harper should be the same as well: to provide emergency help when injuries strike. Anything more than that and this looks like an even better move than it does at face value.

Speaking of two-way players, Kenny Wooten was given something else to be proud of. Despite finishing third in G League Defensive Player of the Year Wooten was named to the G League’s All-Defensive team.

This shouldn’t be shocking news, given the prolific shot blocker Wooten has been for Westchester. Wooten averaged 3.6 blocks per game and at times made it look like he was playing NBA 2K.

Kenny Wooten with the SNATCH block ??

Next stop, the New York Knicks?

This isn’t a season highlight. This is literally 1 game. And it’s all on display here. Essentially a microcosm of what Kenny Wooten does night in & night out. Pass, convert crazy oops, block shots, rebounds, hit 3 jumpers in a row w/ the game on the linepic.twitter.com/ybqviB9vYY

»READ: Where does Kenny Wooten in all of this?