Monday Musings: The Best Knicks Win of the Season 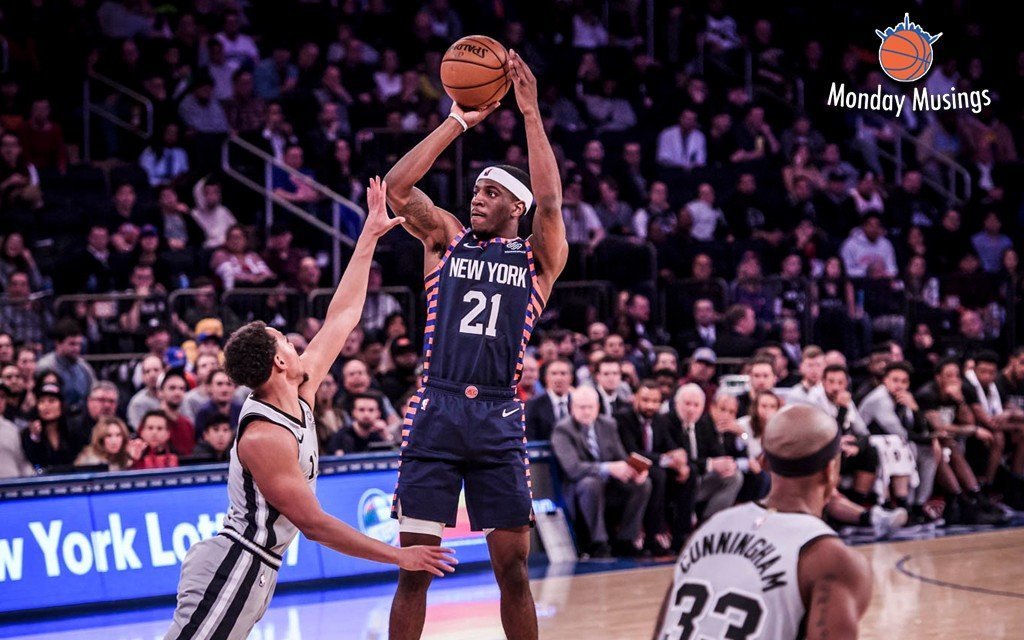 Win or lose, what you saw from the New York Knicks Sunday evening is what you want to witness the rest of the season. This happened to come in the form of a 130-118 demolition of the San Antonio Spurs at Madison Square Garden.

The Knicks won yesterday, and they won because the players who potentially have a future with this organization performed at a high level.

Dennis Smith Jr. and Mitchell Robinson were the best two players on the floor in a game that featured DeMar DeRozan and LaMarcus Aldridge as opponents. Smith Jr. finished with 13 dimes and assisted on six of Damyean Dotson’s career-high eight three-pointers (he has hit 13 threes in his last two games).

DSJ took the game over in the third quarter with nine points on 3-of-3 shooting and five assists. He was playing completely under control and aggressive at the same time. The decision making—when to attack, when to drive, when to shoot, when to kick out, when to reset—was impeccable. Smith also went 2-of-3 from free throw line and seems to already be working to smooth out the hitch in his form. It’s not where he needs it to be yet, but at least both Smith and the Knicks are aware of the obvious problem.

Dennis Smith Jr. on the break ?

Smith is in complete control tonight.

Head coach David Fizdale corrected the mistake he made in the previous game when he played Emmanuel Mudiay more than DSJ. Mudiay was efficient, scoring 19 points on 10 shots, but he also committed seven turnovers to only two assists in the last two games. The offense has a better flow to it when the newer acquisition is in control.

The exclamation point of the victory was when DSJ put one off the backboard for Robinson to finish in transition. A perfect way to cap off what we watched transpire.

It was only the second time Robinson has played 30 minutes or more this season, and the Knicks have won both of those games by a combined 24 points. The other occurrence came when Mitch played 34 minutes in a victory over the Mavericks on November 2nd.

He’s the best player on the team and needs to start to be treated as such. There’s no excuse for Mitch to not be playing at least 28 minutes per game. He’s cut down his fouls, he’s making his free throws, and he’s contributing high level play on both ends of the floor.

This time Robinson wasn’t the only Knicks rookie contributing to the team playing well; he was joined by lottery pick Kevin Knox. Knox started the game 0-for-4 but finished making eight of his last 14 attempts. The still-developing rookie did something well he hasn’t all season when he dropped in 7-of-12 from two-point range (he’s shooting just under 40 percent on twos this season).

A good amount of those connects were coming off a two-man game between Knox and Robinson. It’s the best we’ve seen the 19-year-old scoring as the ball handler in the pick-and-roll. It was hopefully a glimpse of what’s to come down the road.

Not just from Knox, but the Knicks’ youngsters as a group.