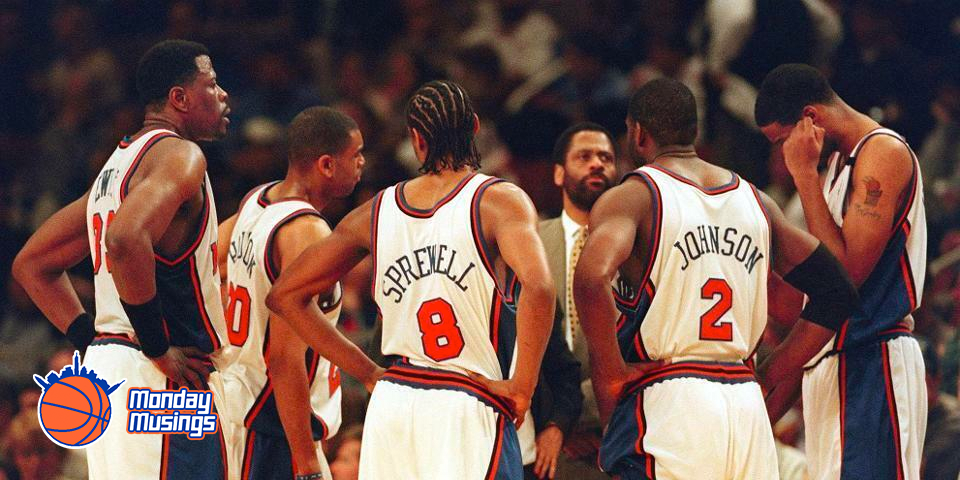 Tackling whether this season’s eventual Finals champion will be “legitimate” by evoking the ’99 and ’22 titles, plus the Knicks’ coach search.

The NBA is pot committed. Over the weekend the league put out official dates for the draft and free agency, which will happen in rapid succession starting with the draft on October 16th and free agency beginning two days later. The league also announced a one-week transaction window prior to the official restart of the season, which will begin on June 23rd and conclude on June 30th.

With basketball now back, with a concrete schedule (although in 2020 everything has to be written in pencil), it got me thinking about the eventual champion of this season, which made me think about the 1998–99 Knicks; if their Cinderella run had ended with a championship I know for a fact it would always be followed up with a mention of the abnormal 50-game regular season.

No matter what Knicks fans did the shortened season would have been looked at as the catalyst for the championship. That clearly didn’t happen, the Spurs would win one of the now five they have under Gregg Popovich.

Then I remembered LeBron James’ first championship. No one mentions it came during the 2011–12 season that followed the 2011 lockout, which resulted in a 66-game regular season. James would finish the season taking down the Oklahoma City Thunder—and cutting down their dynasty before it began. I’m sure I’m not alone in treating that title as LeBron’s first without mentioning the lockout.

The reason I thought of the lockout seasons is it is the closest thing we have to a comparison to what we are about to watch.

When play stopped it felt like we were on a crash course to Giannis Antetokounmpo facing a Los Angeles–based team in the finals. If that ends up still happening—especially if it is James facing off against Giannis, an easy passing-of-the-torch narrative that will overpower anything else—will we judge it any differently than a traditional title?

The short answer: it depends on the winner. Tim Duncan and David Robinson were not subjected to asterisks, same for James, Dwyane Wade, and Chris Bosh. Because it matched up with our expectations. Why? Because they were one of the teams we expected to win. Also, Duncan and James won multiple rings, lowering the significance of the title and, in effect, hiding the abnormality of the season in their piles of rings.

Having said that, 2020 is an abnormality in its own league. The COVID-19 pandemic and the abruptness of the shutdown makes the ‘19–’20 season the ultra black-swan event. Given how long the layoff has been and the sheer abnormality of what is going on—this will be the first time every team is playing a central location and definitely the first time everyone must wear a COVID chastity belt—there is legitimate causation to write this whole season off as a tangent off league history.

But then again, the legitimacy of the title hinges on how concurrent the end result is with what many expected it would be prior to the mid-March shutdown.

For example, if we get the Milwaukee Bucks against the Los Angeles Clippers there would not be much opposition on the legitimacy of that title (other than the Houston Rockets, but they complain about anything).

However, if there was a Cinderella team like the ‘98–’99 Knicks, how will that be received? If a team like the New Orleans Pelicans (one of the bubble teams that made the 22-team cut) were to make a Finals run and actually win the whole thing they would be treated as beneficiaries from an once in a lifetime event; the same could not be said if James were to win his fourth or Giannis win his first.

It’s wrong, but that is who we are as sports fans: accepting the expected and looking to explanations for the unexpected. As a fan with no horse in this particular race I am hoping for the abnormal champion, what better way to remember this year?

Shout out to doing your job right. The Knicks are taking the slow and smart approach to hiring their next head coach, interviewing more than the top projected favorites, Tom Thibodeau and Kenny Atkinson.

The most notable candidate to be added is Philadelphia 76ers assistant Ime Udoka. Udoka cut his teeth as an assistant for the San Antonio Spurs—Udoka also played for the team—and has been part of Brett Brown’s staff since 2019. Udoka spent a brief time in New York as a player in 2006 but is an intriguing candidate who comes from the Popovich coaching tree, a tree that has yielded some of the league’s top coaches like Mike Budenholzer, Steve Kerr, and Brown.

One member of that Popovich tree not included in this longer list of candidates is rising star Becky Hammon. The former New York Liberty guard is highly regarded within the Spurs organization and one of the few hires that even the toughest Knick critic would have trouble chiding. Sadly, she is focused on the return to play and not expected to interview.

The due diligence is welcomed but unless it ends with a smart hire it is all for show. For those with short memories, Steve Mills took a similar approach before hiring David Fizdale.

Kenny Wooten was the human highlight reel in Westchester this season, sending ill-advised shots all the way to Tarrytown.

Wooten was on pace to get some minutes on the main roster before an injury and pandemic got in the way. Despite being the most electric defender in the G League, Wooten finished third in the G League Defensive Player of the Year race, finishing behind Sir’Dominic Pointer and winner Christ Koumadje.

As nice as winning would have been, Wooten will probably enjoy a full-time gig with the main roster, and he very well could find his way into a rotation whether it is in New York or elsewhere.

Let us close this edition of Musings with some pettiness and props.

The pettiness is for the national media that made a big stink of the lack of statement by the team in the wake of the nationwide protests. If you are still waiting on the coverage for the Knicks’ Juneteenth Youth Symposium, don’t hold your breath.

Is this a big deal in the grand scheme of things? Of course not. But it is a nice event held by the Knicks and Rangers, moderated by Knicks general manager Scott Perry, Allan Houston, former Rangers winger Anson Carter, New York State Sen. Jamaal Bailey, and chief marketing officer of the NHL Heidi Browning, educating others on a crucial piece of our nation’s history.

»READ: Revisiting random Knicks seasons of the past: the 2011–12 lockout team