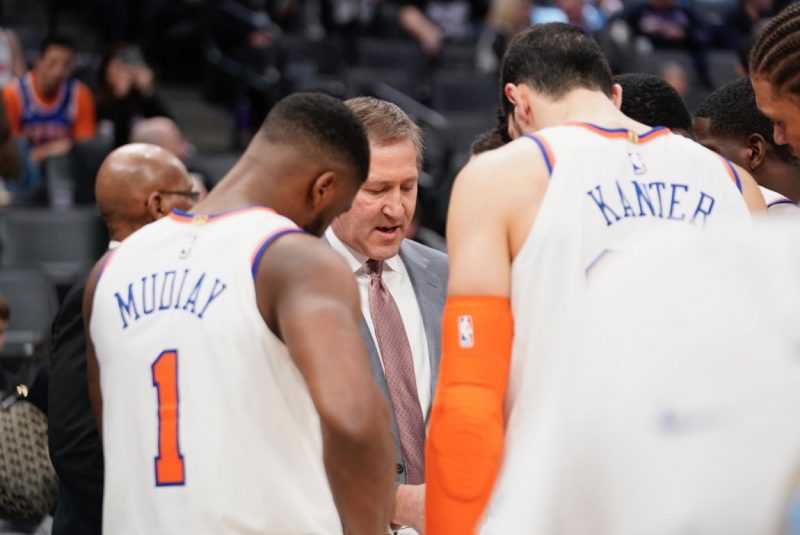 The Knicks are losing, but can’t plummet down the standings any further. How does the rest of the season look, and what is there to look forward to?

There is no place worse than mediocrity. When you’re nowhere near good enough to run with the big dogs, but you also aren’t bad enough to bottom out properly, your position in unenviable. That is the unfortunate spot that the Knicks remain in, through no fault of their own.

Last week should have been a marvelous one for the tank. The Knicks went an imperfect 0–3. What made each game relatively good was that none were blowouts. On Monday, they hung with the Warriors—scratch that, the Warriors allowed the Knicks to hang with them—for a half of basketball. In Los Angeles, they played well with the Clippers before fading off late. Then, to properly cap off a week’s worth of tanking, the Kings cut them down thanks to a Skal Labissiere game winner.

With all that losing you would think they may have gained some ground. Not so much. They did not gain a single inch. The rest of the league is simply bad (like, Fergie National Anthem bad). They remain ninth in the lottery with no real chance of moving up.

The good news is this week’s schedule looks promising for the tank. Before we forecast what’s ahead, let’s look back on what happened.

Good news has been hard to come by recently, but Troy Williams is here to supply it. True to Jeff Hornacek’s endorsement, the team extended a second 10-day contract to the athletic wing. Williams is already the most athletic player on the roster, which is a huge reason why he’ll be sticking around. He’s given the team a preview of what could happen if they filled out the rest of the roster with other athletic wings.

It’s something Williams highlighted when talking to reporters about his contract renewal:

“I think I did a pretty good (first) 10 days. I’m still taking it one day at a time,” Williams said before the announcement. Asked what he brought to the team, Williams answered, “Just athleticism, being able to get out in transition and get fastbreaks and a lot of athletic plays.”

He’s averaged 12.6 minutes and has shot the ball effectively (56 percent from the floor), thanks in large part to his shot selection, which is his greatest asset. Williams is either launching a three or raising up for a dunk. It’s a taste of the modern NBA, a platform the Knicks finally seem to be interest in joining. Williams should be extended for the rest of the season and possibly next season if the plan is to tank one final time.

The third quarter continues to be the Knicks’ greatest opponent. This week alone, they were outscored 106-62 in the third period. Opponents shot 57.6 percent during that span in the third frame. Against the Warriors and Clippers, New York had victory well within their grasp before coming out flat and getting wiped out. Their ineptitude to start the second half has led me to believe one thing–it’s by design.

Stay with me here. Get into the mind of Jeff Hornacek for a second. There’s not a lot going on in here, but a rare stroke of genius dawns. Have your guys play their best in the first half, keep the crowd in it. Then, once the third period comes take your foot off the gas before returning to competitive basketball in the fourth. It’s a bold strategy that Hornacek could have thought of. Then I remember this is the Hornacek who (likely) had to be forced to bench Jarrett Jack.

Whatever the true reason for the third quarter collapses are, it’s something that must be handled once this team is interested in winning again.

Remember Damyean Dotson? The second round pick with a good looking shot? I wouldn’t fault you for forgetting who he is. It seems that the team itself has forgotten about him during their “youth movement.” Other teams have not, however, and the Knicks have been on notice. Per Ian Begley, Dotson has garnered interest from other teams.

In true Knick fashion, that could mean Dotson will be on his way out before he had a chance to come in. During the second half of the season as Emmanuel Mudiay, Frank Ntilikina, and Trey Burke have seen their minutes climb, Dotson has stayed in the DNP to sub-ten minute range for reasons I still do not know.

What I do know is that trading Dotson would be idiotic. Given the return they received for Willy Hernangómez, there isn’t a laundry list of reasons to trade him. Sure, Frankie looks more like a two than a point guard, but why not have a plethora of wings? It’s working for the Celtics, has worked for the Warriors, and looks to be working for the Lakers.

The Joakim Noah saga continues. Noah remains in exile with no clear resolution to his Knicks tenure. It appears that both parties are fed up with each other, yet neither wants to give in. This past Thursday was the deadline for waived players to be eligible for the playoffs. Many speculated whether this would be the moment the Knicks would finally cut their losses.

That leaves us with two possibilities–stretch Noah next season or simply take their medicine and ride the contract out. Now that the rebuild timeline has extended into next season, there might not be any urgency to keep Noah on the books longer than he has to. The team will not be competitive next season with Porzingis out until at least February, if not the whole season. Following next season, Noah’s trade value takes a bump because he becomes an expiring contract. Something tells me Noah will be around longer than his nemesis Hornacek after all.

5. Eyes on the Prize

Conspiracy Cortez time before we get out of here. Keep your third eye open and follow me. The Knicks seem to be trying everything they can to lose. And I mean everything. To their credit, they have succeeded:

Over the past month since Porzingis' injury, the Knicks have won 1 game. And in that time, they have only gained 1/2 game on the 7th slot in the lottery pic.twitter.com/4kM82kI0nw

One victory since Porzingis went down. One freaking game and yet they remain the same distance away from Luka Doncic. Barring a miracle, the team will pick ninth this season, which isn’t the worst thing in the world. But what about next season? I feel like a broken record, but with next season being thrown out, how about pulling off one last beautiful dumpster fire?

As much as I want Luka, there is one other guy I wouldn’t mind having over him. His name is R.J. Barrett, the likely first overall pick for the 2019 Draft barring any catastrophic injury. Barrett isn’t the prodigy Luka is, but he is damn good and someone worth throwing the season for. If the Knicks can lose at the pathetic pace they are currently losing at (perfectly plausible with projected roster minus Porzingis), they will be legit contenders for that number one pick.

The Duke commit is known for sautéing Team USA to the tune of 38 points, 13 rebounds, and five assists, plus the win:

He’s got the size (6’7″) and pedigree (father played internationally for Canada and Steve Nash is his godfather). This could be the light at the end of this long tunnel, especially if the lottery balls don’t bounce New York’s way in a few months.