Monday Musings: The Boys Are Back in Town 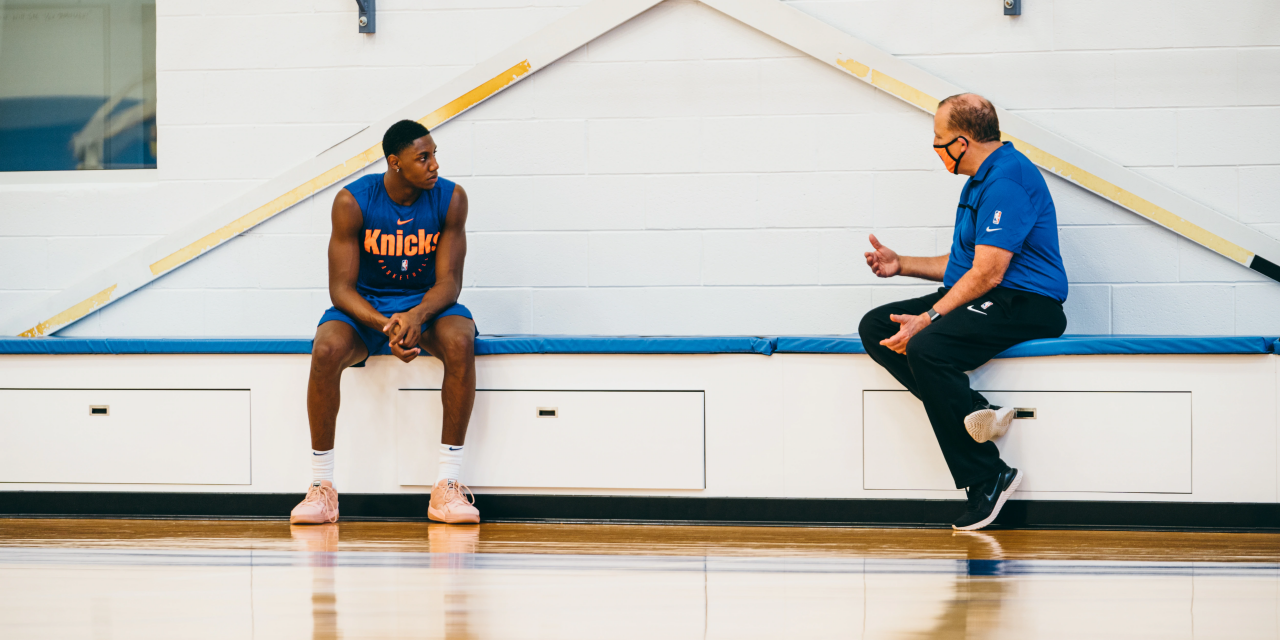 In this week’s Monday Musings, the Knicks get back together for some less-than-competitive mini-camp, and new rumors about the core come out.

The New York Knicks are back. Not in the spirit that Amar’e Stoudemire once proclaimed—they are back in the literal sense. Following a six-month layoff the Knicks have returned to the motherland, Tarrytown, New York, for voluntary team workouts. Sans Mitchell Robinson, a majority of the team returned—including  some soon-to-be free agents.

The workouts have been a breath of fresh air when talking about the Knicks. It feels like we have spent half a year projecting how every prospect fits with R.J. Barrett or if Leon Rose should trade for Chris Paul. Finally we can talk about the players actually on the roster.

Tom Thibodeau gave us a taste of what to expect from his Knicks teams. Thibodeau will take the same approach that he did in Chicago and Minnesota; defense will be the backbone and the offense will be malleable towards the roster’s strengths. In other words, Thibodeau won’t force a triangle down our throats or make Billy McFarland guarantees on a position-less system.

When asked about what that offense could look like on a Zoom new conference, Thiboudeau had this to say.

Hearing this, think about Barrett driving to the rack and kicking it out to the corners and get excited. The Knicks have ignored corner threes for so long and it never made any sense. This also gives me hope that my dream of Frank Ntilikina becoming a key piece of the rotation is alive and well.

Ntilikina shot best last season when he didn’t dribble before a shooting, hitting 30.0% of catch-and-shoot threes, compared to 25.8% off-the-dribble. Both are ugly numbers, I know, which is where the eye test comes in for the assist. When Ntilikina has looked confident shooting it has been corner threes and pull-up mid-range jumpers right above the free throw line.

Thibodeau will utilize Ntilikina for his defense initially. It’s up to Ntilikina to migrate to the corner when he doesn’t have the ball. Lastly, could this tip Thibodeau’s hand to the type of guard he envisions? A speedy guard who gets to the rim perhaps?

Speedy, athletic guards appear to be Thibodeau’s steeze. That could be a shadow endorsement for Kira Lewis Jr. or Tyrese Maxey draft stock. It could also be a reason for Dennis Smith Jr. to hang around.

Thibodeau was enamored with Smith as a prospect, and the reason for that is plain to see. Coming out of college, Smith had some Derrick Rose vibes with his ability to levitate through the air. If Thibodeau wants to get to the rim as much as possible and flank drivers with able shooters in the corner, maybe Smith has an opportunity to change his fortune in New York.

Smith took a step towards a reclamation project by switching back to his NC State jersey number 4. Can Smith now recapture the confidence that came with Wolfpack DSJ? Last season got off to a bad start with a back injury, among other unfortunate events, which derailed his first full season as a Knick.

It’s a new season, with a new number, and hopefully a new Dennis Smith Jr.

Kenny Wooten is Here to Stay

Kenny Wooten sure knows how to make himself comfortable. Wooten was already becoming a favorite amongst fans following the Summer League and G League, and is now a strong contender to become the next cult hero.

Wooten won Knicks Twitter over swiftly with a flurry of tweets that you can’t help but stan him from this day until his last day.

Love being apart of the Knicks..

I wasn't going to say anything at first but I really don't like how they did my guy RJ. 🤷🏾‍♂️

That’s just the tip of the iceberg. On his checklist for next season is improving on his impressive 2K block rating and improving his outside shot. Wooten seems to be working with veteran Taj Gibson to add more variety to his game. Leaping over defenders is great and all, but if Wooten can add this to his repertoire, the Knicks have a gem.

The vet & the young fella.

Tom Thibodeau will find use for the uber-athletic and enthusiastic Wooten. An anchor for a newly formed bench mob would be a great start. Perhaps even playing with Gibson would be the best route towards accelerating his development. There is an opportunity for Wooten to carve out a role as Mitchell Robinson’s backup, and he’s on the right track towards making it a reality.

Invest in the Future

One good thing the Knicks have done over the past two years is pour themselves into Barrett’s development. The jury remains out on Barrett’s ultimate ceiling, but the team is committed to finding out. Barrett has reportedly worked exclusively with associate head coach Johnnie Bryant. If Thibodeau opts to have Bryant take Barrett under his wing, Bryant will have a more than willing Padawan.

Barrett reported to workouts in tremendous shape—and with an updated jump shot.

For Barrett loyalists, the work ethic was always the point of intrigue. He has to feel some way about the All-Rookie snub, and is wise to what is holding him back. Barrett did not shoot the ball well as a rookie, but few of his jumpers looked nearly as smooth as that clip. His elbows are out, his follow-through smooth—could a bump in shooting percentages follow? Time will tell. Either way, Thibodeau likes the work ethic.

“Obviously, there’s a lot of work to be done. These are the initial steps. The offseason is critical for any young player. So obviously you can get going on the development piece, which I think is critical. That holds true for all our players. But he’s been great, eager, he’s working hard. If he does that day after day he will improve quite a bit.”

Temper those Jimmy Butler 2.0 daydreams, but not your expectations for an improved R.J. next season. The team is doing what they never did with Frank Ntilikina or Kevin Knox: investing fully.

For inquiring minds who wondered if Thibodeau would have any say in who the team drafts, your answer has been confirmed. Thibodeau will be very much a part of the discussion on who the Knicks select on draft night. As expected, Thibodeau would not mind if Leon Rose gift-wrapped him as the best perimeter defender in the draft.

The skeptic’s view on Okoro rests solely on the team’s ability to develop, not on Okoro’s potential. The one “flag” with Okoro is his jump shot. Okoro is a Skywalker, meaning his aerial attack is not launching a 30-footer, but gliding 30 feet to the rack.

Even the largest skeptics must acknowledge that the Knicks are in no position to skip the best player on the board, which is what Okoro would be at eighth overall, because he may not fit with the existing core. If Okoro does struggle with his shot, and the team remains near the bottom of the league in shooting once again, guess what?

»READ: What are the risks and rewards of Knicks nabbing Isaac Okoro in the draft?