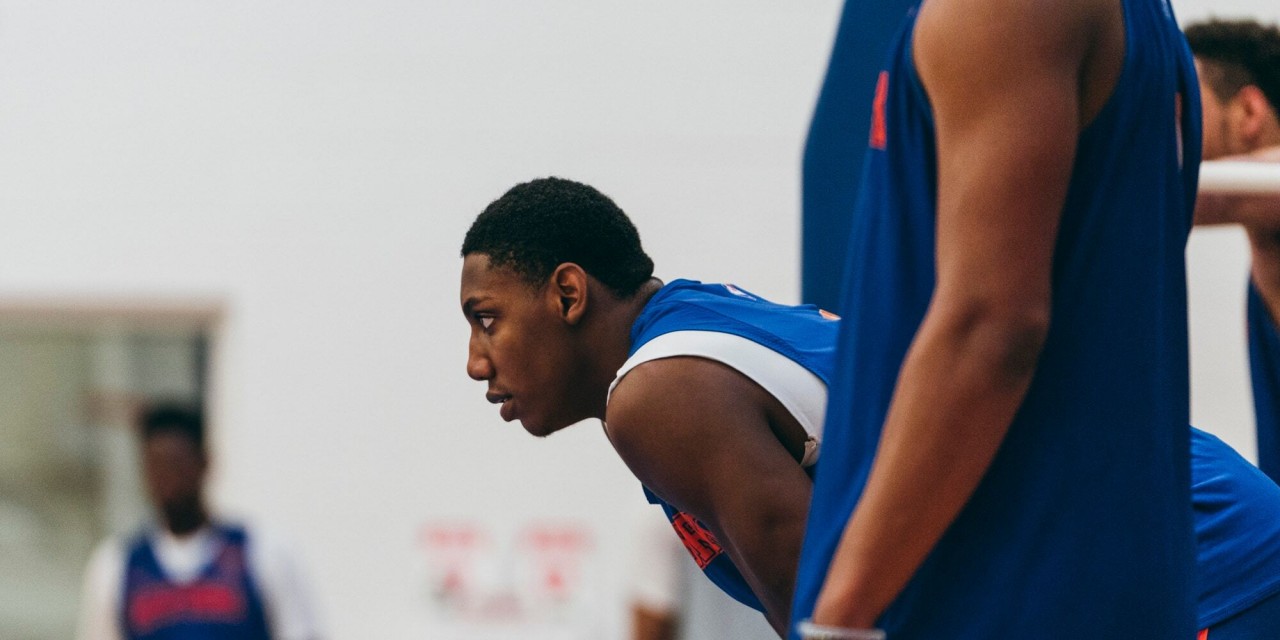 Knicks rising sophomore swingman RJ Barrett was mentioned as a crucial part of Leon Rose’s rebuild. How will they build around the Canadian?

Stan Van Gundy returned this week, taking the head coaching job in New Orleans. Van Gundy’s return reminded me of his iconic “form a fucking wall” gameplan. The New York Knicks plan to do some building of their own, just not a wall: they want to build around R.J. Barrett.

One of the focal points, or perhaps the focal point, of what the Knicks will do this offseason will be centered around how it affects Barrett. This is good news for two reasons. First, the front office is finally going all in on maximizing their own top draft pick. Second, it gives them a semblance of a plan to follow. Last season’s roster carried a pick-up game vibe to it at times mainly because there wasn’t a Plan B from signing Kevin Durant.

The decision to make Barrett the centerpiece is a debate in itself. Barrett has yet to prove he excels in one department. His shooting touch remains a question mark, a problem compounded by the fact he cannot overwhelm opponents with his athleticism while he irons the kinks on his jumper. Mitchell Robinson has a strong case to be the franchise centerpiece, but it is hard to fault the thinking behind choosing the wing over the rim runner.

Barrett makes up for his shortcoming with a crafty approach supplemented with relentless energy. His greatest asset right now could be his playmaking. In addition to last season’s roster being a band of mismatched players, it was a roster built to highlight every possible hole in Barrett’s game. Barrett experienced the same lack of spacing that plagued him at Duke, only in the NBA he was not able to overpower his opponent.

Thus far the team has taken the right strides to correct this mistake. Barrett has been working with associate head coach Johnnie Bryant, who worked closely with Donovan Mitchell, Damian Lillard, and Gordon Hayward. Bryant excels in pushing limits, and Barrett has made it abundantly clear he is strong in the work ethic department. Time with Bryant could elevate Barrett’s ceiling.

The front office’s job now is to place appropriate pieces around Barrett to maximize any strides he takes. For now we know that Barrett is at his best when getting down hill. If he has to shoot, having time to catch and shoot yields better results than when he is asked to create before the shot clock expires.

Barrett does a good job getting to the rim, and while his touch at the rim leaves room for improvement (50.9% at the rim last season), there is opportunity for creation. Barrett could find a rolling big (Mitch) or an open shooter.

With that in mind, there is a general sense of the type of players who will mesh well with Barrett. Some are already on the roster. Robinson is an ideal rim-runner—hopefully much more—and defensive anchor. If the team can tap into some 3-and-D development, Frank Ntilikina has the potential to be a low-maintenance floormate.

Clearly there is work to do. The good news is Leon Rose has the opportunity to put Barrett in an infinitely better position to succeed in his sophomore season.

There are a couple of star players on the radar, and everything mentioned last week holds in the lens of maximizing Barrett. Chris Paul would be the best target to land. The wealth of knowledge the Point God could impart on Barrett is enough to like the move. Paul is the best shooter and the smartest player with whom Barrett could share the floor.

On the polar opposite side of the spectrum you have Russell Westbrook. Westbrook would worsen the congestion in the halfcourt and recreate a dynamic the Knicks had with Derrick Rose and Kristaps Porzingis. For those who still remember the D-Rose experiment, you recall Rose was a decent statistical player, yet it was impossible to deny that Porzingis was closer to an afterthought than point of emphasis.

Westbrook is much better than the player Rose was, but what Westbrook is good at does not sync with Barrett, or much of the current roster. Russ would eat cap space and possessions all the same. While he might come with the right mindset of trying to turn the Knicks around, it feels inevitable before Russ takes on the world.

Victor Oladipo is somewhere in the middle, being neither a hindrance or an ideal running mate.

In terms of non-star trades, New York should go after strong shooters like Luke Kennard to open up the floor, or a soon-to-be free agent like Bogdan Bogdanovic.

Shooting, shooting, shooting is all the team should worry about when evaluating free agents. The likelihood of landing a big fish like Brandon Ingram is borderline nonexistent. Malik Beasley, however, could be a restricted free agent within grasp.

A stretch four alongside Robinson could do wonders to open up the floor. Danilo Gallinari would be the dream scenario. Carmelo Anthony or Christian Wood are more likely—Anthony specifically if a Paul deal is made.

Fred VanVleet is another player the team has been linked to who checks every possible box New York would want to put around Barrett: strong shooter and a capable playmaker.

The draft is where the team can get a little more creative. Equipped with three picks, the Knicks could afford to take a player that may not look like a strong pairing with Barrett on its face.

Isaac Okoro’s name has been brought up a lot in recent weeks. The team has done their due diligence on Okoro and then some. Not surprisingly, Tom Thibodeau is a driving force in the interest.

Here is a 16-second summary of why Thibodeau is high on him.

– sprint + chasedown block
– back in bounds to rotate and cut off baseline
– rotate to the opposite side to cut off a potential baseline drive
– rotate back to his original assignment, sprint, and contest pic.twitter.com/xbaOOamZqm

Okoro is the best perimeter defender in the draft and could be the best slasher, too. His Achilles’ heel is shooting, which should disqualify him from contention if the goal is to flank Barrett with a cavalry of snipers. Okoro is a special case. He projects to be such a good driver his poor shooting might not even matter.

Barrett and Zion Williamson proved to be a successful partnership, and Okoro possesses many of the same strengths as Zion, with the difference being that Okoro is actually from this planet. Okoro could collapse the defense and find Barrett up top, like this:

He could also do this.

Isaac Okoro just had the dunk of the year: pic.twitter.com/RIbQY57G6K

If Okoro were to be the pick, the Knicks would be prudent to spend their remaining picks on some shooters: Desmond Bane, Isaiah Joe, Tyrell Terry, Malachi Flynn, or Killian Tillie just to name a few.

Better fits with Barrett at eight would be Killian Hayes, Kira Lewis, Devin Vassell, or Obi Toppin if he falls.

The important thing to remember is Barrett will not become a star overnight. Next season will still have its lumps. The promising development is the team is committed to finding out what the best Barrett looks like.

After watching Kevin Knox and Ntilikina, and before them Porzingis, develop at the mercy of the team’s moves, it’s encouraging to know that the moves this offseason will be focused on miracle turnarounds and more on development.

Adam Silver has previously said he would like to start next season with fans. That left the start of next season in limbo, but the latest developments are finally bringing some clarity to the situation.

A Christmas Day start without fans is starting to gain momentum. Christmas Day has become the NBA’s version of Thanksgiving, giving us a full day of games. The latest possible proposal is a 72-game season that starts before Christmas Day and would return the draft and free agency to their normal timeframes.

This might be a quick turnaround for the elite teams who recently finished the bubble, but for the fellow “Delete 8” teams it would be welcomed. The Knicks on Christmas have not produced great moments, but after the year that we had, waking up on Christmas morning to a game at MSG would not be the worst gift in the world.

Amar’e Stoudemire is back in New York—as a member of the Brooklyn Nets. Stoudemire joins the ever growing list of former Knicks to join the Nets organization. He also joins the best teammate he ever had, first-year head coach Steve Nash.

Early voting started this past Saturday and the turnout in New York City was strong. Madison Square Garden is the prominent early-voting location, and the line to get in was so long you would have thought Patrick Ewing was about to play.

Wowow, New York City turning out for the first day of #EarlyVoting. This is just *part* of the line outside MSG, wrapping around several blocks. pic.twitter.com/D8wyDULEPT

»READ: How much does RJ Barrett’s three-point development mean to personal progress?