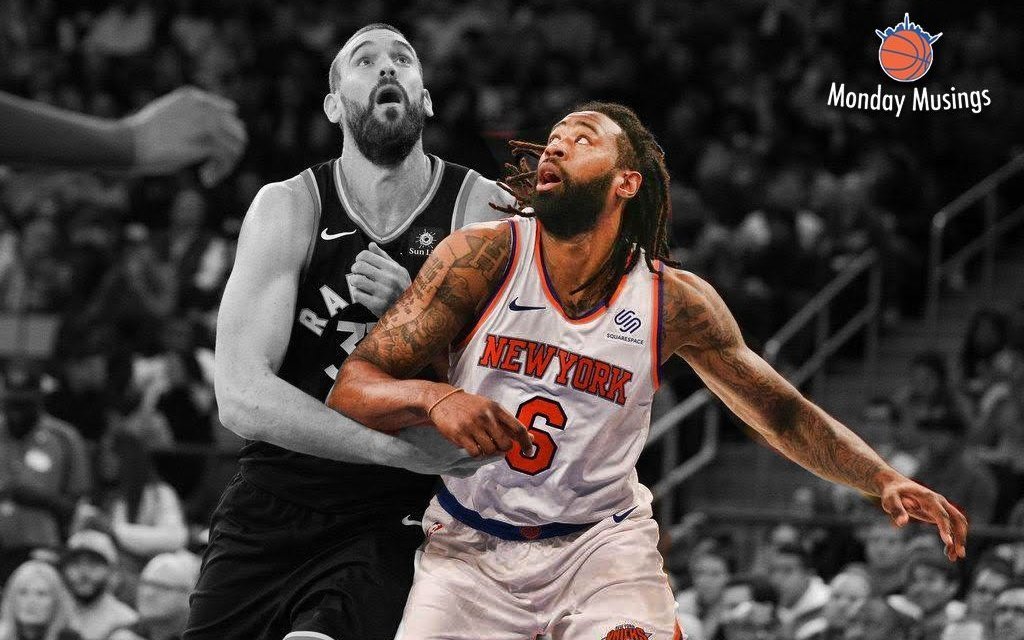 This week’s Monday Musings features Charlie and Bryan discussing the Knicks’ veteran center DeAndre Jordan and his role on the team moving forward.

Charlie Zegers: My son was giving his room the Marie Kondo treatment yesterday. He decided that his Kristaps Porzingis shirsey does not spark joy any more and dropped it in the “donate” pile.

A few minutes later, he asked me what number DeAndre Jordan was wearing. It was a hint—and not particularly subtle. But I told him we’d hold off on any future purchases until the offseason. By the time his birthday rolls around this summer, he should have a much more interesting array of shirsey choices.

If I was buying today, I’d probably go with Mitchell Robinson.

I have to say, the team is more fun to watch now, even though the results haven’t changed all that much. They were competitive against Toronto. The Detroit game was fun, thanks mostly to Dennis Smith Jr.’s career-high. And hey, they have a legit shot to actually win one on Monday.

The joys of low expectations…

Bryan Gibberman: I’m enjoying watching the young players too, but it seems like there’s a rule that the Knicks must always have a player whom I despise watching. It went from Amar’e Stoudemire to Andrea Barngani to Sasha Vujacic to Enes Kanter and is now turning into DeAndre Jordan.

What I’m seeing based on my eye test is lining up with what the numbers show:

Some of this is DAJ vs. starters & Mitch vs. bench but it’s not that much.

Jordan’s numbers are that bad for a variety of reasons, especially on the defensive end. He gives too much space on ball, isn’t attentive off ball, sags too far back when defending pick-and-roll—leaving wide open looks for the ball handler—and doesn’t cut off passing lanes in the pick-and-roll, leading to easy dunks (go back and watch Andre Drummond during the Pistons matchups).

For someone with Jordan’s athletic ability and length, this is completely inexcusable levels of defense. It’s very difficult to watch.

Charlie: I can’t argue with the numbers, but I wonder about the sample size.

I’ve always wondered about how difficult it is for players to adjust to new teams and systems when traded in the middle of the season. I suspect that’s why Fizdale has kept DAJ and Dennis Smith Jr. (and Wes Matthews, while he was here) together in the rotation; at least they’ve played together before.

Related: Smith hasn’t exactly been Gary Payton out there, either.

Kyle Lowry with some high praise for DeAndre Jordan as a mentor for Mitchell Robinson:

That said, it also seems fair to suggest that Jordan isn’t the player he once was on the defensive end; I heard that suggested more than once before the trade.

Can’t say I’m that worried about it—not while Mitchell Robinson is playing like Bill Russell out there.

Bryan: Again, small sample size, but I do think it’s telling that in 28 minutes together Robinson and DSJ have a +1.7 Net Rating and in 100 minutes DSJ and DAJ have a -24.5 NetRtg.

That will balance out over more minutes, but how about we increase the amount of time the kids are on the court together?

Already tied his career high with 13 points, and DeAndre Jordan is LOVING it. pic.twitter.com/AiAnb23ug5

Fizdale now finds himself in a situation where he is going to be forced to placate a player because he’s good friends with a certain available free agents this summer.

Did the Knicks’ front office look at film of how Jordan was playing before developing this plan? For all the DAJ is going to mentor Robinson stuff—what are the film sessions like as DeAndre is getting picked apart on defense while Mitch dominates games for stretches?

And now the Knicks are at risk for using an exception or actual cap space on a player next summer who unquestionably shouldn’t be on the roster.

Jordan needs to start playing at a significantly higher level, or this is a complicated issue that isn’t going away.

Charlie: I don’t really buy the notion that DAJ is part of the Knicks’ long-term plans. He’s here because his salary was needed to offset the contracts sent to Dallas in the Porzingis deal, full stop.

I also don’t mind the idea that he’s helping Robinson develop. Hell, Patrick Ewing has lost a few steps too, but I bet he can still point things out in the film room or school young guys on technique. In the meantime, treat him with respect so he tells his pal KD that Fizdale has a clue and the organization isn’t totally inept.

As for next year? Maybe, after the smoke clears and Kevin Durant has signed a contract on the tiny table in Greenburgh, NY, Jordan will decide to stick around on whatever exception or minimum contract the Knicks will be able to offer.