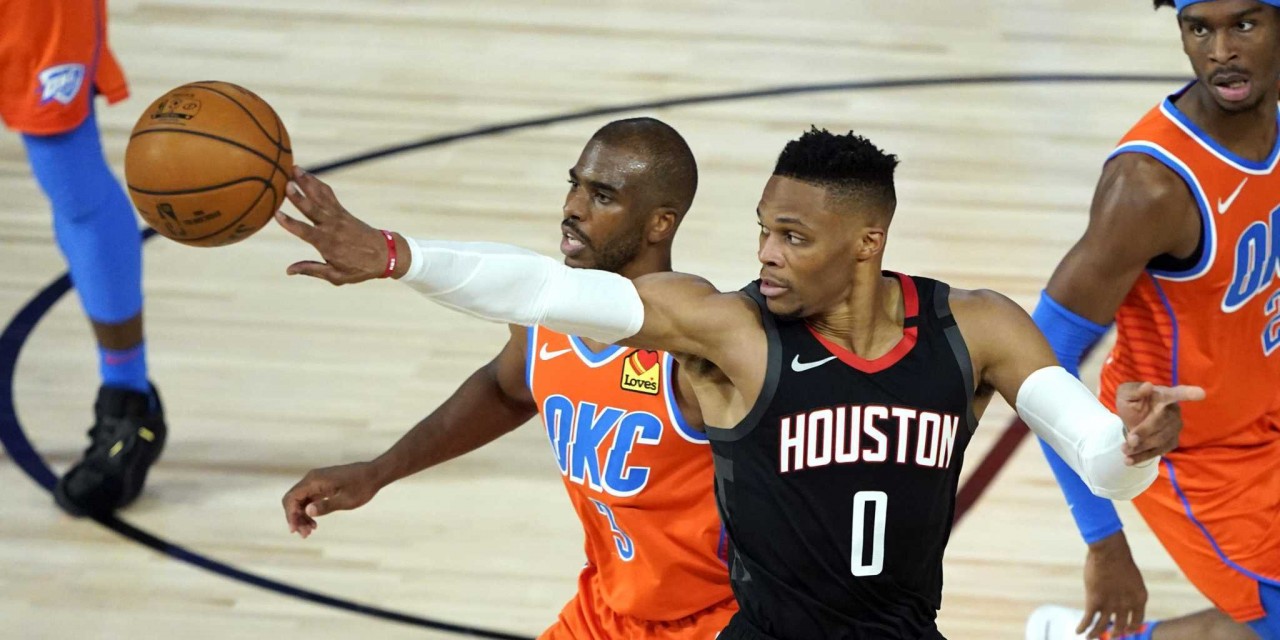 Russell Westbrook was rumored to be on the trading block for the Knicks, but landing with the Knicks would make absolutely no sense given some other options for New York.

One certainty heading into the offseason is that Leon Rose will address the point guard position—more specifically, with a veteran point guard.

Even if the New York Knicks address point guard with one of their three draft picks, the new team president will want to add a more established player in the starting role. Elfrid Payton proved last season that while he may be a solid lead guard in a vacuum, he does not have a future in New York. Ditto for Dennis Smith Jr.

Three names reign more prominent than the rest: Chris Paul, Fred VanVleet, and Russell Westbrook. The Paul connection and interest is self-explanatory and well-documented. Paul is the ideal choice, especially if the Knicks were to select Killian Hayes, Kira Lewis Jr., or Tyrese Maxey. But Paul also comes with an expected price tag that is much higher than it was last summer.

Paul finished seventh in MVP voting and will garner interest from playoff teams, further elevating the expected price to land him. Sam Presti, ever present, will not send CP3 to New York for a cash dump. Rose will still inquire, but more affordable options could be found in the trade or free agent market.

Fred VanVleet is one of those options. If reports are true, the Knicks will be among the suitors for VanVleet, who will be very well-compensated and with multiple bids from teams. However, the average annual value will likely be about half of what Paul would cost for the next two seasons. VanVleet had a rough end to his season, but he would still be a considerable upgrade over any guard the Knicks possess on the roster.

VanVleet isn’t the Point God. However, he is a good outside shooter capable of running an offense. From a mentorship perspective, who better to teach a rookie than someone who had to fight for every dollar he is about to be paid. Return on investment is a forgotten concept in these parts; a three-year deal at $22 million average annual value is a sound investment.

For those not sold on VanVleet or Paul, consider the alternative if Rose is truly hellbent on adding a veteran guard to move the needle next season. The team could chase Russell Westbrook, who would solve few if any of the team’s imperfections, while also eating up a large chunk of the cap.

Westbrook is the classic star-chasing move. Like Paul or VanVleet, he would be the best guard to put on a Knicks uniform since Derrick Rose. But like Rose, Westbrook would only exacerbate everything wrong with this team. Westbrook’s raw numbers do a great job hiding his horrific shooting splits.

Without taking into account that he is on the post-prime side of his career, arming Tom Thibodeau with an all-world athlete at point guard sounds like a great idea. Once you realize it would mean adding a 25.8% three-point shooter to a team that finished 27th in three-point percentage last season, the move becomes nightmare fuel. The lack of weapons in New York would lead to a ton of nights where Westbrook takes on the world. Those nights may produce some good wins, but the more likely outcome is a lot of puzzling losses.

The main appeal with Westbrook is he might come cheap for a player with his résumé. Westbrook has three seasons left on his contract, which caps out at $47 million in its final season, a season in which Westbrook will be 33 years old. Daryl Morey is wise enough to acknowledge that simply offloading Westbrook’s hefty contract is a win for Houston. Westbrook’s lack of shooting suggests that the latter years will be ugly and costly.

The Knicks have had far too much ugly and costly deals in its recent memory. There might be three options on the table, but if mercy truly exists, Rose will only consider two.

»READ: The Knicks Wall 2020 Draft Board — the aftermath