Monday Musings: Is Mudiay Legit, and What’s Up With Frank? 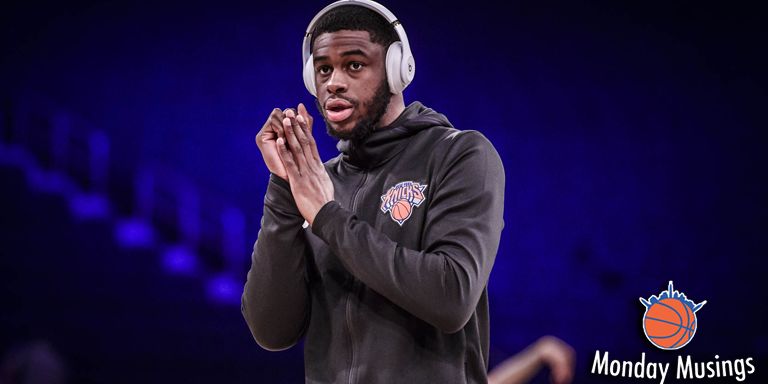 Emmanuel Mudiay’s heroics versus the Bucks has further propelled fans to question whether the Knicks should retain the fourth-year guard’s services beyond this season.

Charlie Zegers: I was off the grid Saturday night, off in the woods on a camping trip with my son’s Boy Scout troop. It wasn’t until 11 or so this morning that I finally got around to checking the Knicks-Bucks score.

I have to admit feeling a bit conflicted after a win like this. I mean…they won (yay!) But Frank Ntilikina got a DNP (ugh). But Kevin Knox had his best game as a pro, and Damyean Dotson was a big factor! (More yay!) Trey Burke got hurt! (So much ugh.) Emmanuel Mudiay is playing like a lottery pick! But he’s not signed for next year! (Yay and ugh combined.)

And I’m not even thinking about how one unanticipated win will impact lottery scenarios. They’re not getting Zion, people. Kristaps Porzingis’ return will almost certainly net them enough wins to fall into the 4-8 range, if not lower.

Emmanuel's three (later changed to a two) gets the Garden crowd on their feet: pic.twitter.com/MemU3d5h4U

I’m most conflicted about Mudiay. He’s playing wonderfully. But his emergence really complicates the Knicks’ plans for next season and beyond. I had assumed that players like Mudiay, Mario Hezonja, Burke, and Noah Vonleh would be renounced at the end of this season to clear cap space. The better Mudiay plays, the harder that scenario is to imagine—and that creates a couple unpleasant scenarios:

Either way, the more they focus on Mudiay, the more I worry about Ntilikina’s development.

Kyle Maggio: I second those mixed feelings on Mudiay and Ntilikina. On one hand, we want Frank to be molded to the potential we see, but on another, has it ever been this fun to be wrong about a player? Mudiay has been terrific, and while it’s still very, very early, I’m enjoying this helping of crow I need to eat.

He’s very engaged in both ends. He’s busting his tail defensively, playing at the fastest pace of his career, scoring, and matching, his career high with points in the paint, and he’s even hitting some threes. It’s been a joy to watch.

Regarding retaining Mudiay, I do believe the Jeremy Lin route is best. Look, this is a huge summer, regardless whether or not they land the big fish they hope to. There’s no shame in gambling on going big, and taking a swing at Mudiay afterwards if he’s still there. If he cashed out elsewhere (assuming this current level of play), then so be it.

We have a Frank sighting!

But he's celebrating a three-ball from his teammate Damyean Dotson. pic.twitter.com/WsFJSDy9CQ

Even if he does, or does not walk in this scenario, at least we can hang our hats on the developmental mindset working in New York, right? Maybe Mudiay is the first big success, and there’s more to come? Maybe Mudiay developing into a legitimate starting point guard forces Ntilikina to develop, and flourish as a wing player?

Charlie: Ah, there’s the rub. Can you really hang your hat on that “developmental mindset” if other teams get all the benefit?

Let’s say Mudiay plays at this level for the rest of the season, then signs a fat free agent contract with…let’s say Phoenix. Or Miami. That’s not really a win for the Knicks’ player development system, it’s the Knicks being used as a farm team. I’m not going to declare victory until the new “development mindset” produces a player that’s part of the team for the long haul.

I’m more than happy to admit I was wrong about Mudiay. I suggested they waive him—more than once—to create roster space for Allonzo Trier. He’s played better than I ever would have suspected. But I still think they should look to trade him for a future asset—a highly-protected late first or a couple of seconds.

Which brings us back to Frank.

I know lots of people who are in the “concerned” to “really alarmed” to “full panic mode” where Frank is concerned. Some are sure he’ll be traded any day now, and are all set to surround MSG with torches and pitchforks and protest signs when that happens. I’m not there yet. The DNP sort of sucked, sure, but that’s been a pattern with Fizdale. He sat Hezonja for a few games, the Dotson, and both returned to the rotation before long.

We also don’t know where things stand with Frank’s shoulder—or is it shoulders? We do know he was playing pretty well, then went into a terrible shooting slump, and then there were reports that he was nursing injuries. Did the injuries cause the slump? We still have no idea. But it seems fair to wonder if the two are related. (Same goes for Knox, incidentally. He was playing terribly. He had an ankle injury. One may have something to do with the other.)

Kyle: That’s a fair and valid concern. This is why the summer of 2019 is going to be so interesting. Where are the Knicks deciding the cut-off on players they want to retain and develop? Does the buck stop at the rookies and Damyean Dotson, and they renounce the rest to take a shot at Kevin Durant and a loaded 2019 free agent class? The balance of rebuilding, and going for it, is going to really interesting to watch after this season. It’s easy to be patient without Kristaps—it gets much harder once he’s back, and healthy. If you ask me, you can’t keep them all. Even if Mudiay plays this way all season, and they don’t move him, you have to renounce him. This level of play is solid, but this team needs more than solid going forward.

More than solid is what we hope Frank Ntilikina turns out to be. I will echo what I said on the TKW Podcast; I’m not worried about his benching. Dotson missed four games, Burke received DNPs, and we know Fizdale said around the 25-game mark he’d start having a set rotation. Tonight’s game is no. 25. Beyond tonight, this is when we should start being critical and observe Fizdale’s decisions with a microscope. Everything prior was an extensive tryout, and now we’ll begin to get the answers to the questions we’ve been asking. I also don’t think his shoulder has anything to do with it. He had a great first month, and has been piss-poor offensively since, and we knew he was inconsistent on offense already.