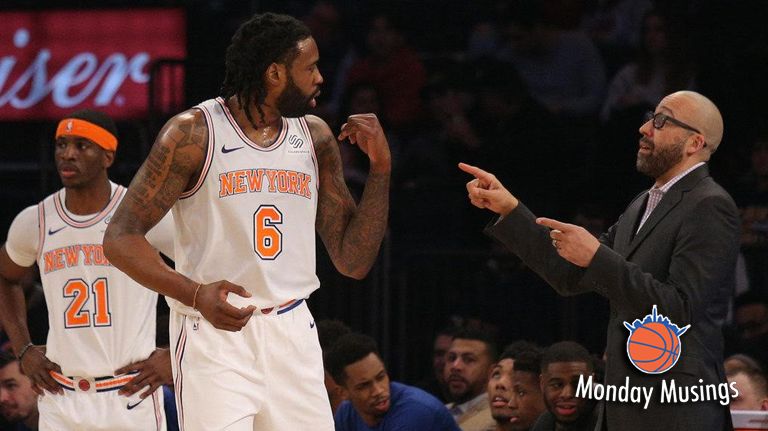 Bryan and Charlie discuss the debuts of the new Knicks, the state of the franchise post–Kristaps Porzingis trade, and more in this week’s Monday Musings.

Bryan Gibberman: We got our first look at the New York Knicks with their three new players involved since the Kristaps Porzingis trade. Dennis Smith Jr., DeAndre Jordan, and Wesley Matthews all made their debuts as the Grizzlies handled the Knicks on Sunday afternoon at MSG.

The offense was super clunky because none of the three had enough time to soak in what head coach David Fizdale likes to run. The trio didn’t know where to be on the court and we were watching a good amount of freelancing.

Individually, DSJ flashed some brilliance mixed in with some bad. He’s much better at getting all the way to the rim than any player on the Knicks roster, by far. There were a couple spectacular passes, but his jumper was way off—he didn’t connect off the bounce or when he had catch and shoot opportunities.

Jordan’s still a vertical threat, but the guards outside of DSJ still need time to get used to his tendencies as the pick-and-dive man. Allonzo Trier did have one nice set-up for him when Jordan bailed on the screen early and he straight-lined it to the rim. On first watch, I thought the defense was more good than bad with the caveat I need to see a lot more to come to any conclusions.

The team chemistry on 2k just went up 2% pic.twitter.com/RDdCW2TbKV

Matthews knows how to play basketball and he increases your team’s I.Q. You’re gonna deal with some wonky shot selection; it’s just what he does. I’d like to see Fizdale utilize him at the 4 more with the second unit of Frank Ntilikina, Trier, Damyean Dotson or Kevin Knox, Matthews, and Mitchell Robinson or Luke Kornet once Frank is back.

Charlie Zegers: I have to be honest…I am just so tired of it all.

Tired of Porzingis acting petty. Tired of reporters giving us the, “We knew the relationship was bad, but we never thought…” routine. (You all whiffed on this story. Own it.) Tired of the Bobby Marks types giving us 2K Franchise Mode pipe dreams in which the Knicks end up with Anthony Davis, Kevin Durant, Zion Williamson, and Kareem Abdul-Jabbar this summer. Tired of Steve Mills talking about how much the team has always loved Dennis Smith Jr.—like we don’t remember how the 2017 draft went down.

And I’m extra double-tired of Enes Kanter. Can we give that guy a bus ticket and drop him off at Port Authority or something?

(Have to say… the fact that MSG fans are chanting for Kanter like he’s Greg Butler or something is one of the weirder developments in a season that’s had plenty of ’em.)

An actual basketball game made for a refreshing change of pace.

It’s hard to say much about the new arrivals based on Sunday; they looked very much like guys who had never practiced with their teammates before. Early foul trouble pretty much ruined Smith’s debut, but I am eager to see him share the backcourt with Ntilikina. And I like the idea of DeAndre Jordan as Mitchell Robinson’s tutor—even if that arrangement only lasts 10 days or so. Wes Matthews? Does he even last a week in orange and blue?

I’ll be glad when the deadline has passed.

Bryan: Is it possible the Knicks’ organization wants to show a little competence on the court and keep Jordan and Matthews around?

I lean towards trades or buyouts, but the thought has crossed my mind that they wouldn’t mind not losing every single game. The Hawks have the fifth-worst record and are seven games clear of New York; they’re going to be hard to catch. The odds for 1-4 are the same besides a slight drop off once you get to four. Depending on how the organization has graded the non-Zion prospects, the risk of dropping from two to whatever might not be as daunting.

Charlie: A trade of Matthews seems plausible, even likely. There has to be a team in playoff position that could use a veteran guard on a short-term contract; maybe he nets the Knicks a future second. If not, buy him out and give his minutes to Trier, Dot, or Frank. Trading Jordan seems less likely simply because of the money he’s making. Where are they going to find another team that can absorb that kind of number?

I heard at least one NBA talking head—possibly Ian Begley, or maybe Steve Popper—suggest that Jordan is part of Kevin Durant’s inner circle and could be part of this summer’s extreme roster makeover (ed. note: ESPN’s Tim Bontemps tweeted that Jordan and Durant are “good friends”).