Monday Musings: Frank Balls Out in Break Out Game 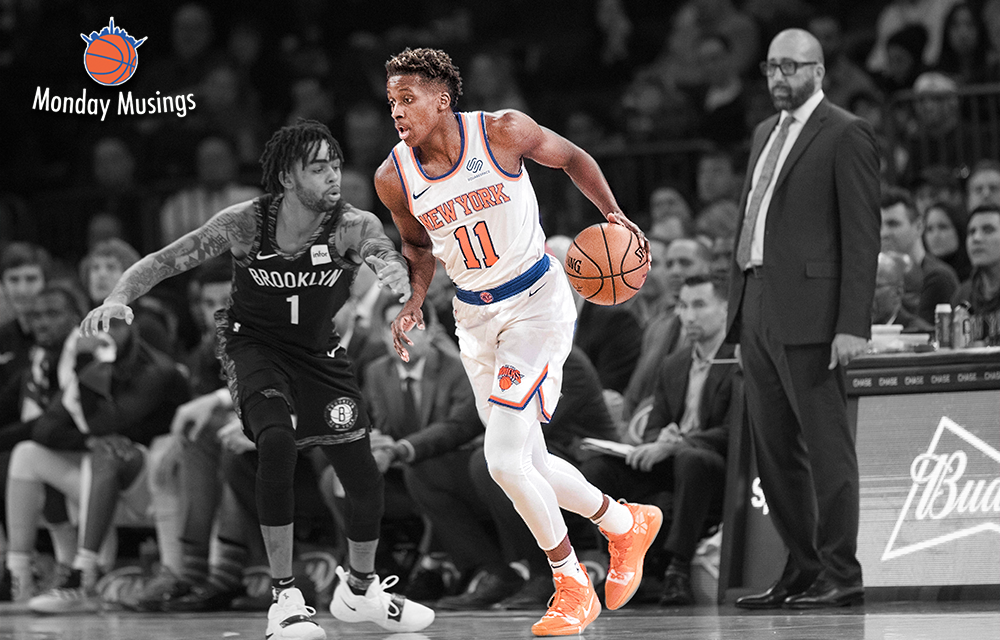 Bryan and Charlie discuss Frank Ntilikina’s career night versus Charlotte and the Knicks’ challenges at the small forward.

Bryan Gibberman: That was an exciting loss to the Charlotte Hornets for the New York Knicks—oxymoron be damned.

Second-year guard Frank Ntilikina found his offensive rhythm in his second-game back in the rotation. Would head coach David Fizdale have gone to Ntilikina as early as he did if Allonzo Trier didn’t get hurt during warmups? We’ll never know. The circumstances led to Frank breaking out for an 18-point second half and he made all four of his three-point attempts.

Ntilikina scored in a variety of ways—catch and shoot, pull-up jumpers, working into the lane and his best move of the night didn’t even count. Frank used his strength to clear space from Frank Kaminsky to get a better angle for a layup attacking the rim—it finished with a bogus foul call but who cares!

It was also an encouraging night for rookie Kevin Knox. Knox finished with 26 points and 15 rebounds and a team high 41 minutes. The 19-year-old was given the freedom to experiment and make mistakes, that partially led to his 10-of-25 effort from the field. Knox was 4-of-8 from three, 6-for-17 from two and attempt only two free throws. The efficiency isn’t going to improve until he continues to develop his ball handling and subtle body movements in traffic and leverage his size and athleticism to push more of his attempts closer to the rim.

Knox is shooting 6-of-21 in the paint non-restricted area. Those floaters look great when they go in but it’s just a really hard shot to make consistently. It’s not much better in the restricted area (49 percent).

The finishing while attacking on the move is probably the most important offensive skill Knox needs to develop.

Charlie Zegers: Certainly the happiest I’ve been about a 12-point loss in quite some time…and as near as I could tell, the crowd at the Garden felt the same.

The big question, though, is, “What happens next?”

As much as I enjoyed Knox and Ntilikina’s performances in the second half, I worry that it was all just a happy accident. Burke hurt, Trier hurt, the starting five getting absolutely torched by Kemba Walker…Frank finally gets some run, but was it just as a last resort?

If he’s not back in the rotation—in a significant way—after last night’s performance, I’ll start to believe all the “Frank has fallen out of favor” stories.

You’re right about Knox. Some of his struggles have probably been injury-related, but some are due to the fact that he can’t simply beat players at this level with his length and athleticism. Either his shot selection will improve with experience, or his career will follow a Tim Hardaway Jr. arc.

Bryan: I’m torn about the starting lineup. It’s very obvious Emmanuel Mudiay, Tim Hardaway Jr,. Mario Hezonja, Noah Vonleh, and Enes Kanter ain’t it.  The group now has a 101.9 ORtg and 111.9 DRtg in 146 minutes together (per NBA Stats). Hezonja didn’t play after the first five minutes of the game last night and Knox started in the second half.

What they should do going forward is a complicated question.

I think it’s fairly obvious Fizdale isn’t thrilled with the idea of playing Courtney Lee and Hardaway together because he wants more size at the 3. Do you want to break up the kid lineup by sliding one of Daymean Dotson and Knox into the first five? I think my preference is for the Knicks to keep playing Mitchell Robinson, Knox, Dotson, Trier, and Frank as a group to see the type of chemistry they can develop over the course of the season.

You could slide Lance Thomas into the Hezonja spot minute starter role once he returns from injury and sub in one of Dotson/Knox early in the first and third quarters. This would allow them to still play with the second group.

I get Fizdale is going to have to find some minutes for Lee to try to help his trade value, but the two obvious players that should no longer be apart of the Knicks’ rotation are Trey Burke and Hezonja.

Charlie: It isn’t Fizdale’s preference to play smaller. (The East is big, man.) But it may be a necessity. They need more of a defensive presence in any lineup that features Kanter. Maybe Lee gives him that for as long as he’s on the roster.

Thomas would make some sense too, but he provides next to nothing on offense. Maybe that doesn’t matter now, with Mudiay and Vonleh playing better.

Of course, the problem might ultimately be solved by Scott Perry. The team still needs to clear a roster spot for Trier. And Dec. 15—the unofficial start of NBA trading season—is this Saturday. That date is significant because, under CBA rules, it’s the first day that players who signed free-agent contracts last summer can be dealt.

Moving Lee is probably the Knicks’ top priority. I wonder if the Lakers would be interested.

I just saw a rumor that LeBron was interested in prying Trevor Ariza away from the Suns. Lee could fill a similar 3-and-D role.

Bryan: I doubt the Lakers would want Lee’s contract because they want to preserve future cap space.