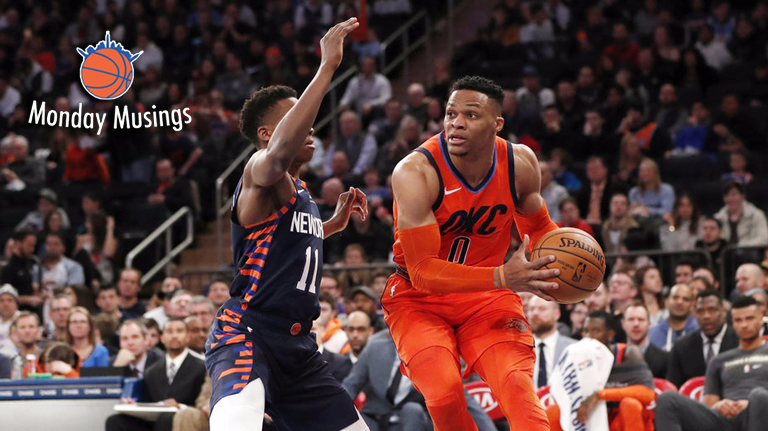 The second-year guard Frank Ntilikina bounced back with a solid game against the Thunder in the home loss. What’s hanging up noticeable progress on the Frenchman, though?

Charlie Zegers: Monday afternoon, just before tipoff, and MSG’s Al Trautwig is doing his best to hype a game in which the Knicks will be hopelessly outclassed.

“Matchup to watch,” Al proclaims, in a giddy tone usually reserved for Olympic gymnastics. “Russell Westbrook and Emmanuel Mudiay.” It was the saddest thing I’d seen on television since the final season of Breaking Bad.

The Knicks are clearly looking to the future when it comes to a number of personnel decisions. Lance Thomas, Courtney Lee, and Trey Burke are effectively out of the rotation. So was Enes Kanter, before being pressed back into service due to Luke Kornet’s twisted ankle. Mudiay? He’s got a starting spot on lockdown. This worries me.

I guess one could make the case that he’s earned it, that he has been the most effective lead guard on the Knicks roster for much of this season. However, “effective” is relative. He’s been better than Frank Ntilikina, but that’s not saying a whole lot; Ntilikina has been terribly inconsistent in his second year. That said, the team was 3-6 with Ntilikina and Damyean Dotson in the starting lineup. The Knicks are 6-25 since Mudiay took over the job. David Fizdale told the media today that Ntilikina will stay in the backup point guard role for now.

Hey, I guess that’s better than benching him completely.

What’s up with Frank?

I wouldn’t dare suggest that I can “fix” Frank Ntilikina—or even that I know why he’s had trouble this year (aside, of course, from the fact that he still isn’t old enough to buy an overpriced beer from one of the vendors at MSG). But I do have one pet theory. And like all the best theories, it has a grandiose name.

I call it “The Iman Shumpert Corollary.”

Some Knick fans remember when Iman Shumpert was going to be the team’s next star and a lock-down perimeter defender to make Derek Harper or Charlie Ward proud. It never really happened for Shump, and I’m convinced that Steve Novak is to blame. Mike D’Antoni paired Shump with Novak. Shump would try to cover his man and Novak’s…and wound up getting caught in-between on every trip down the floor.

Ntilikina has moments when he looks like a lock for First Team All-Defense, but he’s spent much of this season sharing the floor with Novak-esque defenders (Novakian defenders?) and covering for inept teammates just makes his job that much harder.

And Frank’s not the only victim. Allonzo Trier’s goaltend on the game-winner in the London game was caused when Hardaway botched a switch.

Keeping Frank in a bench role might help if Fizdale uses Frank with a bench unit of competent (or potentially competent) defenders like Dotson and Mitchell Robinson.

Of course, getting that tall Latvian guy back would help as well.