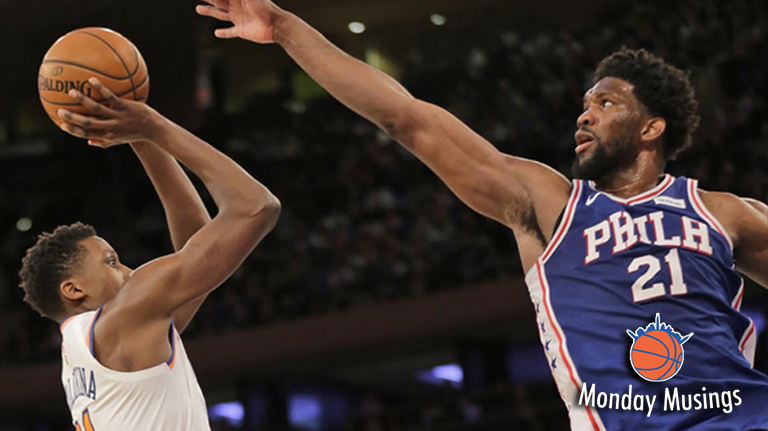 Another flash from Frank Ntilikina and Luke Kornet provided more questions than answers while Enes Kanter sat against the Sixers.

Charlie Zegers: So let me get this straight:

With Tim Hardaway Jr. (hamstring) and Enes Kanter (too many burgers on cheat day/please don’t get hurt while we’re working on trades) sidelined, the Knicks actually looked competent on both ends of the floor and were one Emmanuel Mudiay three-pointer from taking the Sixers to overtime.

Also worth noting: the Knicks were led by players who might actually have a future with the team. Kevin Knox scored 31—a career high. Luke Kornet had 23—also a career high—and was +25 for the game. (Yeah, I know plus/minus kinda sucks as a stat…but +25!) Frank Ntilikina didn’t shoot particularly well (4-of-11 from the floor, 0-of-1 from three, 0-of-2 from the line) but had six assists and two steals and was +10 in the game.

Good morning to nobody except Kevin Knox. pic.twitter.com/bkXCC6RRmG

I don’t know about you, but I’d sign up for 39 more games like yesterday’s to close out this season.

Bryan Gibberman: I thoroughly enjoyed the game against the 76ers.

It was a strong return from Frank, and I’m very confident saying that was the most attempts he’s had in the restricted area for a single game. Even a couple of his misses led to baskets because of the attention he drew. He and Kornet have solid chemistry—an all-around encouraging performance.

The center minutes the rest of the reason should be split between Noah Vonleh, Kornet, and Robinson. The lineup combinations Fizdale experiments with are so much more interesting when Kanter isn’t involved versus when he is.

Charlie: You’re a much bigger proponent of Hardaway than I’ve ever been, which we’ve discussed here in the past. I wouldn’t be at all disappointed to see him moved, possibly in one of the Enes Kanter trades Tommy Beer proposed in Forbes.

I feel like the best role for Timmy is that of a complementary scorer—maybe coming off the bench. Maybe he fits better in a year or two, when the Knicks are deeper overall; for now, I’d rather see his minutes going to the kids.

I would like to see a lot more of the Vonleh-at-the-5 experiment. Sure, he struggled against Embiid yesterday, but who doesn’t? But I’m thinking the primary 5s for the rest of the season should be Kornet and Robinson, with Vonleh in that spot in the occasional “go small” grouping.

Bryan: The team still needs Timmy’s offense to have the roster function properly. They only had a 104 Offensive Rating against the 76ers, per NBA Stats, and this came with Knox having his best scoring game as a pro—it was the defense that helped them be more competitive. If you don’t play Kanter and have Hardaway, I think you can manage his defense more than when they’re both involved in the rotation. THJ playing doesn’t stop the kids from getting plenty of run.

I hate all of the trades proposed in that story. If the Knicks need cap space it can be acquired during the offseason when they know they’re getting players from whom it’s worth moving on. It happens all the time in the NBA, and there’s no reason to rush.