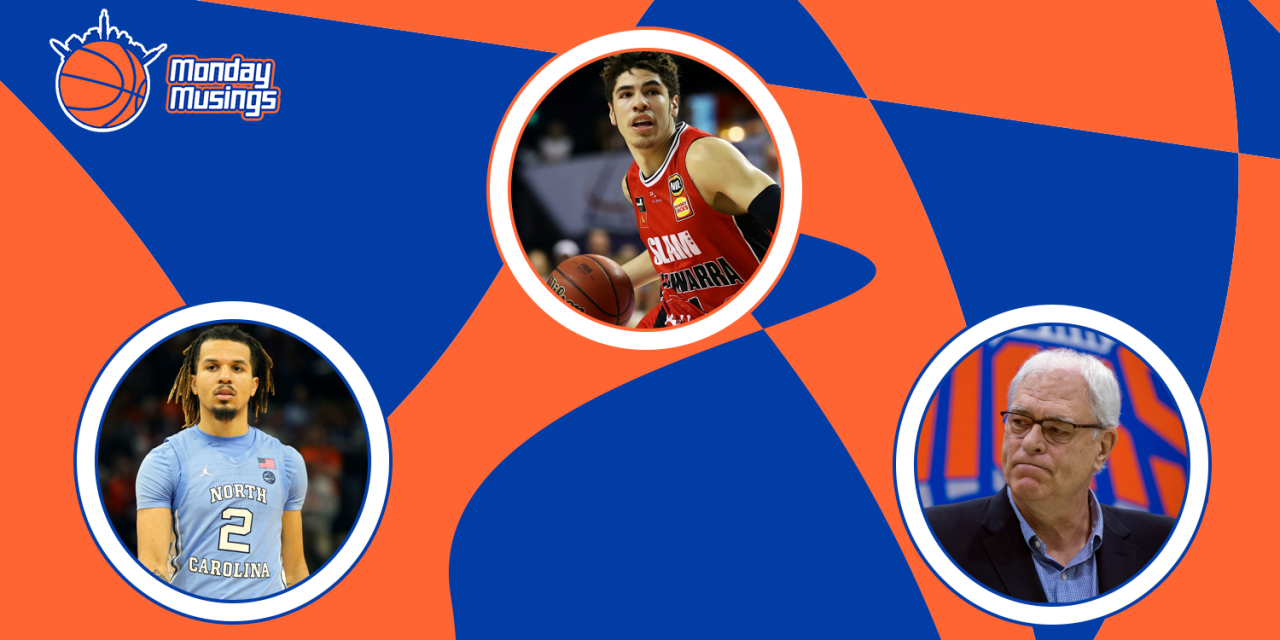 Two prominent names have emerged as top draft choices for the Knicks, and Phil Jackson is in the news again in this week’s Monday Musings.

This could end up aging as poorly as a banana left on a dashboard on a summer day, but I think I cracked the New York Knicks’ draft plan.

Over the last several weeks the draft has been the only Knicks-related item worth talking about. The season is likely over for New York, and thank God for it. The only thing that matters is next season and who will be on the roster once the Knicks take the floor again.

If the season is indeed done, that means the Knicks will enter the lottery with a chance at the number one pick and the possibility to fall down to ninth overall. That is quite the range to prepare for, but a mix of retained general manager Scott Perry’s tendencies and recent news has led me to believe the team is going big name hunting.

Last week I wrote about LaMelo Ball and the Knicks ensuring they land him, possibly making a move up to do so. Ball remains a cut above the rest, someone who would not only gel with the core but put assess in the seats nightly. It appears as if Ball’s camp read last week’s Musings—or they have had their eyes on the Big Apple for some time. I’d go with the latter, although LaVar Ball and myself will be great friends when he forces LaMelo to NYC.

LaVar was on Complex’s “Load Management” podcast last week and had this to say when asked if he still felt LaMelo to New York would be good.

“I think so. The bright lights, East Coast. If everything lines up right, the Knicks get the first pick and get LaMelo and LiAngelo with him and somehow get Lonzo in the long run. Shoot—The Triple B’s. The Ball Brothers on Broadway.”

While LaVar works on speaking this into existence, the Knicks have options. If they were to stay middle of the pack after the lottery, the team has their eyes on another well-known name, Cole Anthony.

Anthony’s father Greg was part of those ’90s Knicks teams, and prior to the season many believed Anthony had top pick potential. A rough season at UNC altered that thinking, but Anthony remains a main target for the Knicks, who have “extensively” scouted the young guard.

In his lone season as a Tar Heel, Anthony missed a chunk of games with a knee injury but came back to finish the lost season. He leaves Chapel Hill with a career average of 18.5 points, 5.7 rebounds, and 4.0 assists per game. Like Ball, Anthony misfired a lot, shooting 38.0% from the field, 34.8% from three, and 75.0% from the free throw line.

The appeal (and hope) is that Anthony’s poor season was an aberration, a result of poor spacing. There is no denying this year’s UNC team was one of the least talented groups the school has had in some time. With more room to operate and better teammates, chiefly R.J. Barrett and Mitchell Robinson, maybe Anthony can look like the player many thought would be among the best in the 2020 class.

Anthony’s appeal is that he can turn it up in a split second, and can shoot off the dribble—a talent my TKW colleague Eli Cohen pointed out that is nonexistent among the current roster.

Just watched Cole Anthony vs FloridaSt and I'm very intrigued about his scoring profile.
Can shoot off the dribble in so many ways, even if UNC offensive system doesn't help him at all.
I think that he's going to be more productive at the NBA level. pic.twitter.com/tXNdSASJJR

Anthony’s ability to get his shot off without needing a feed is a plus, as is his ability to shoot from beyond the arc. Like Ball, Anthony’s fit alongside Barrett, Robinson, and Frank Ntilikina is strong, and given his namesake Anthony would likely become the face or one of the faces the team props up as the future of the franchise.

And that is what the Knicks are really searching for with this new regime: a face. Every move made post–Steve Mills has been about becoming “cool” again. Leon Rose is well connected. Steve Stoute is well connected. World Wide Wes, while not officially part of the team, is perhaps the best connected person in the league.

The next phase of becoming cool is landing a player prospective free agents know and would want to play with. Ball fits the bill, Anthony fits the bill, and Anthony Edwards—the closest thing we have to a consensus top pick in 2020—could also fit the bill. All three guys are well embedded in the NBA circle unlike the lesser known prospects from around the globe.

So, stop dreaming of Killian Hayes, Tyrese Haliburton, or Deni Avdija; they aren’t known names. Perry’s draft history suggests he will go with a college player or an American player with strong name recognition.


Why? Because it’s never been about rebuilding the right way.

The Knicks are rebuilding, yes, but on their terms. As the haphazard Porzingis trade taught us, when the team gets any inkling they can land a star they will attempt to do so. Since Carmelo Anthony left no one has taken the throne. Porzingis claimed he wanted it but never officially took it. Barrett could be the guy, but in case he isn’t, Perry and his staff will use the upcoming draft to bring in someone they think they can.

This is more than basketball. Broadway is about showmanship as much as it is about hoops, and it’s been far too long since the Knicks were fun to watch. Coupling that with the Nets finally rolling out Kevin Durant and Kyrie Irving next season it’s easy to understand the team’s thinking.

It’s time for the team to be fun again. And if that comes at the cost of rebuilding the right way, it looks like that is a gamble team brass is willing to make.

The Last Dance concluded Sunday, and as expected, Phil Jackson’s forgettable run as team president was rehashed in the public sphere although not in the docu-series. Old friend Charley Rosen chimed in on Jackson’s poor decision to take the Knicks job and went as far to say that Carmelo Anthony was the person to blame.

Rosen claims ‘Melo could have been the Michael Jordan in the Triangle for the Knicks if he had embraced the archaic system.

“Carmelo undercut him, telling [Kristaps] Porzingis not to say anything in public about how good the triangle was,’’ Rosen told the New York Post. “Carmelo refused to run the triangle — which is why Phil re-signed him: There was a lot of pressure from [owner James] Dolan. But if Carmelo would’ve run the triangle, he’d be open on the weakside.

“He’d have to pass and do this and run around, but he’d ultimately have a whole side wide open — 16-17 feet away from the basket. The defense would be too far away to double. He’d have open jump shots and was one or two dribbles from the basket. He’d be a killer. He’d be Michael Jordan. He’d be unstoppable. But Melo was catch and shoot and didn’t want to do other things.’’

Thanks Charley, you can leave now. The Knicks had the correct blueprint the year before Jackson came to town: space the floor and shoot a ton of three-pointers. If Jackson would have tried to embed principles of the Triangle, like Steve Kerr did in Golden State, maybe things turn out better. Maybe ‘Melo wasn’t as open to the Triangle as Jackson would have liked, but Jackson seemed hellbent on forcing his system on everyone, too.

The Knicks did something cool on social media for once, hosting a jersey tournament to see which ones fans liked best. The finals featured this season’s Florida Gators–like “Statement” jerseys against the fan favorite NYK token jerseys.

What this contest accomplished (beyond decent social media by one of the worst social-media teams in the game) is the need for throwback jerseys. People love the token jerseys, and thought they were coming back last season.

For a team that loves raking in money, it shouldn’t be this hard for them to comprehend that limitless jersey sales await them if they drop those throwbacks.

This past Saturday was the anniversary of better times for New York: Allan Houston sending the Miami Heat packing, in the first leg of a historic Finals run.

For many ‘90 babies like myself, this was one of our first memories. The Knicks’ Cinderella run remains an outlier. No eighth seed has made a deep run since and likely never will.