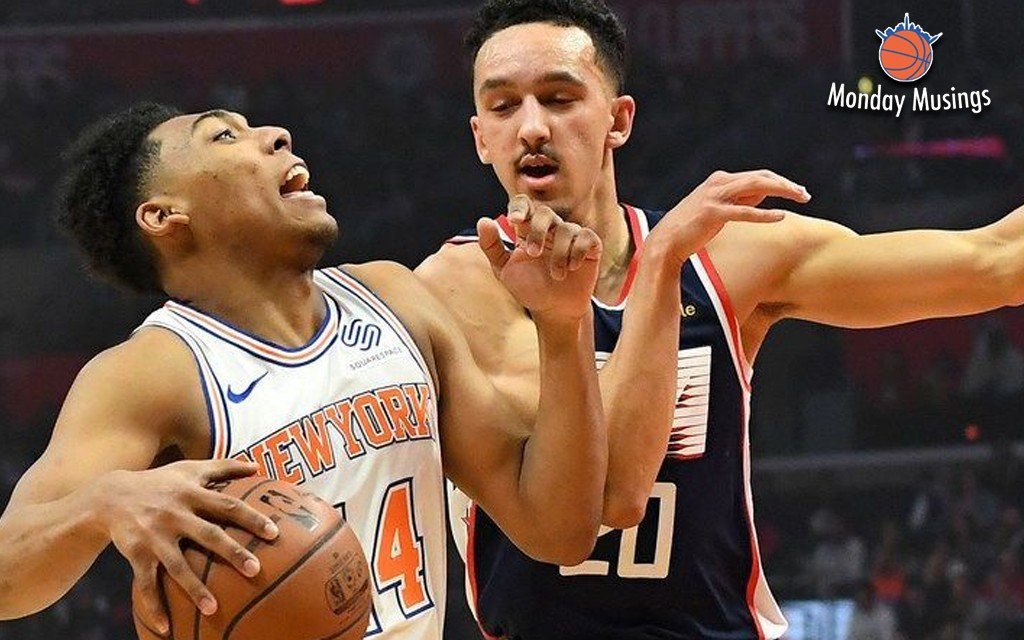 In this week’s Monday Musings, Bryan and Charlie discuss the Knicks’ no-show in L.A. and lineup tidings.

Bryan Gibberman: I honestly don’t have much to say after that pathetic performance by the Knicks against the Clippers. I’m ready for the season to be over. My only curiosity left is seeing how David Fizdale incorporates Frank Ntilikina.

I think we have the basic outline of what every other player on the roster is this season. There’s not much else to learn. Mitchell Robinson is the best player on the team. Allonzo Trier is having an excellent rookie year—the complete opposite of Kevin Knox. I’m not writing off Knox yet, but the next time watching him matters is after another offseason of work.

Charlie Zegers: One of my oldest friends lives in L.A. He took his toddler to the game for her first Knicks experience. Mid-way through the first quarter, she had totally checked out…he sent a picture of her, happily messing with an iPad and ignoring the carnage.

My friend’s daughter was about as interested as the Knicks yesterday.

I feel bad for whoever runs the team’s official social-media accounts. It can’t feel good to be posting this sort of thing:

I’d wonder if the team had too much fun in L.A. the night before, but then I remembered, most of them aren’t old enough to get into clubs. (Does that matter, really? I’ve always wondered. Like, can Kevin Knox pass for 21 because he’s nearly seven-feet tall? Or does every bouncer in every NBA hangout know he’s just 19 because that’s what basketball Twitter says in reaction to pretty much everything he does?)

I do wonder what a game like yesterday’s would have looked like if Ntilikina was active—and playing the way we seem to think he can, despite an alarming amount of evidence to the contrary this year. He might have slowed Shai Gilgeous-Alexander a little, right?

Combine Frank with Mitch and maybe there’s the makings of a professional-level defense?

Bryan: The disappointing part was the defense had recently been improved. To see a complete collapse like yesterday after playing better for the good part of their last four games was ugly.

I’m not expecting championship-level basketball. I’m not even expecting them to be good!

How about keeping the game to within 20 points and not let it creep to almost 40?

Is that too much to ask?

I have to say, I’m a bit worried about the maturity of the team as a whole. In the last two weeks or so, we’ve seen stories about all-night Fortnite sessions, and then yesterday’s total no-show for a day game in Los Angeles that even had Alan Hahn cracking jokes about “Advil and sunglasses.”

I mean…I sympathize. When I was 19 or 20, I spent more than my fair share of time playing Madden and NHL 94 or hitting the off-campus bars and then White Castle. But there’s a time and a place.

David Fizdale is supposed to be implementing Pat Riley-esque standards of conditioning with this team. Maybe simple professionalism needs to be part of that focus.

Bryan: I’m not overly worried about that stuff. When you’re a very young team in the NBA winning games is difficult.

The key for me is showing an ability to be competitive rather than whatever the hell that was on Sunday.

The good thing is some of the young players besides Knox are progressing in the right direction. It’s been an excellent stretch Mitch, Trier, and Dotson.