Monday Musings: Do the Knicks Need a ‘Jared Dudley’ Type on the Team? 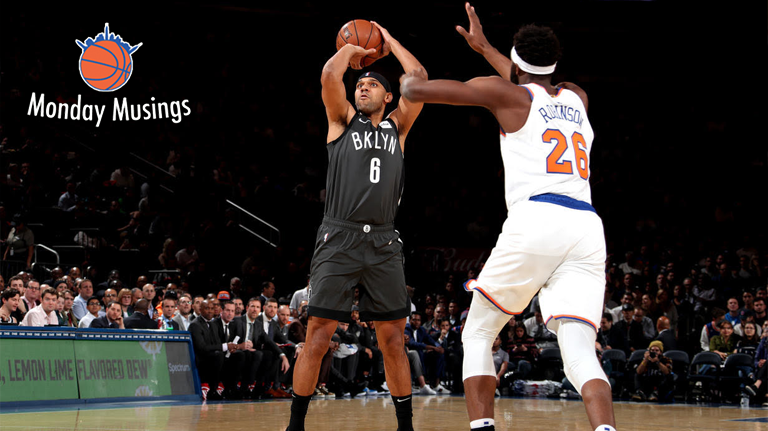 This week’s Monday Musings feature Charlie and Bryan discussing the utility of a prime-years player acquiescing to a smaller role on the team, as Jared Dudley has exemplified for Brooklyn.

Charlie Zegers: Jared Dudley did an extensive interview with Evan Roberts on WFAN some weeks back. He mostly talked about the Nets, of course. But the conversation touched on some of the other places he’s played, which is more or less the entire league…from the Steve Nash/Amar’e Stoudemire Suns to the Clippers to Giannis Antetokounmpo’s first season in Milwaukee.

I suspect Dudley will do well as a coach—or as broadcaster—if that’s what he chooses when his playing career is over.

I used to wonder why a team like Brooklyn would waste a roster spot on a guy like Dudley, or why Atlanta would give minutes to Vince Carter. But I’m starting to understand. In fact, it seems to me the Knicks could use a couple of 30-somethings at the end of the bench.

It’s all well and good to suggest that David Fizdale should re-allocate minutes to “the kids” on his roster. Problem is, they’re all kids. Enes Kanter, Trey Burke, and Tim Hardaway Jr. are 26. Damyean Dotson is 24—older than Noah Vonleh and Emmanuel Mudiay. Hell, even Lance Thomas, who seems so old when compared to his teammates I sort of expect him to sport a full-on Dumbledore beard, is just 30.

Maybe Fizdale would have an easier time managing the development of the Frank Ntilikina, Mitchell Robinson, and Kevin Knox core if he had a Jared Dudley or two on the roster?

Bryan Gibberman: I think they do have a Jared Dudley on the roster. The Knicks’ version is the aforementioned Thomas and Courtney Lee. Lee’s been tremendous in his role as a mentor this season based on what we can tell from a distance, along with what’s been reported by the guys who cover the team on a regular basis.

I do agree with the general premise that every team needs two to three players who won’t complain about not getting minutes, but hopefully can competently contribute when asked. I don’t really think that archetype exists much in the NBA—players are either washed or want to play for the most part.

Charlie: Right. I don’t want to take anything away from Thomas or Lee, who have been—to use a metaphor I dislike and generally try to avoid—good soldiers this season. You could probably say the same about Luke Kornet and Damyean Dotson, and even Mario Hezonja, who also seem to do a good job of staying ready to play and involved even when benched for an extended period.

Enes Kanter, on the other hand, hasn’t been. And given his age and contract status, it’s not that hard to see why.

I don’t see a solution, other than removing him from the situation. There should be some real urgency to move him—and soon.

Maybe they’re just waiting for Mitchell Robinson to get back.

(An aside: perhaps it’s my imagination, but I’m trying to remember the last promotional image the Knicks put out on social media that didn’t feature Kanter. They market the guy like he’s a star—while the coach reduces his role. The mixed messages can’t be helping the situation.)

Bryan: The Kanter stuff across this season and last season has been so strange to me. I don’t know if I’ve ever seen an organization bend so much for a player that was clearly not a part of their future.

Look at how the Kings have handled Zach Randolph, Grizzlies’ Chandler Parsons, Nets and Nuggets’ Kenneth Faried—the three that come to the top of my head. Why the Knicks allow Kanter to dictate things like he has is beyond me.

When Jeff Horancek was coaching, the answer was simply he was terrible at his job. David Fizdale is quite aware of Kanter’s deficiencies and correctly grasps what this season is about, yet at times Kanter is still prioritized.

It needs to stop, and soon.