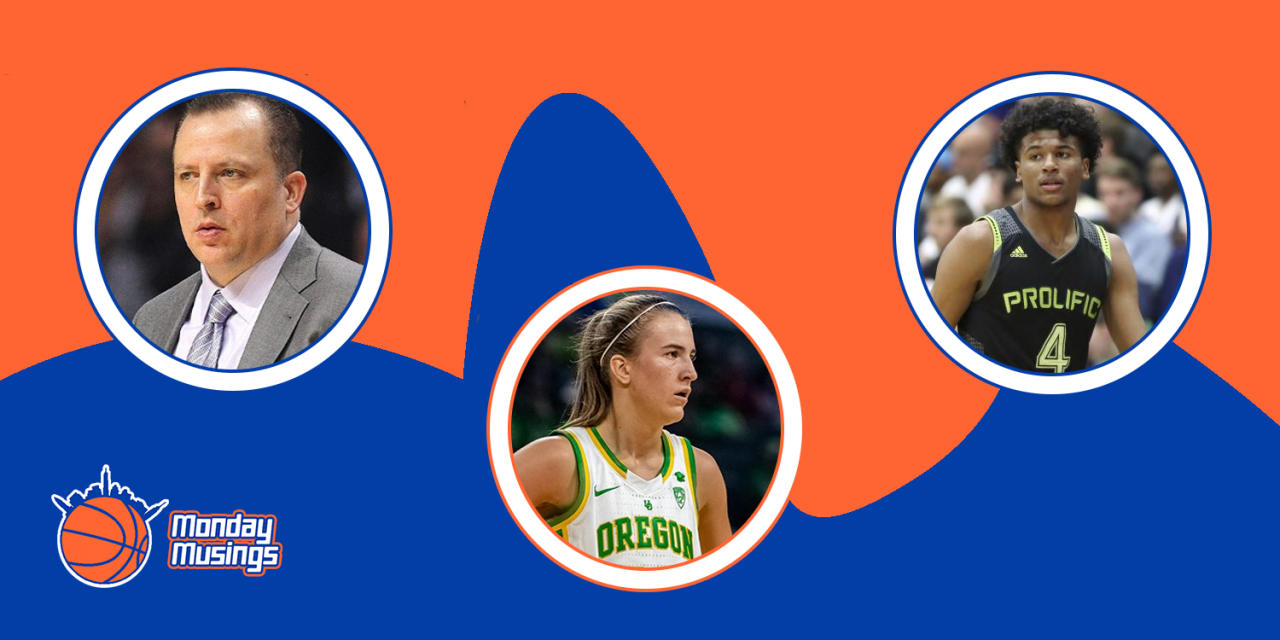 It’s been growing quieter around the Knicks in the past week, except for some Tom Thibodeau chatter along with negotiations with Cavs exec Brock Aller.

In the spirit of the nostalgia tour caused by our COVID-19 isolation, I felt now was as good a time as any to bring back a staple of Monday mornings here at The Knicks Wall: Monday Musings.

The news cycle has been scarce outside of a few rumors, and lots of reminiscing on pre-COVID life, but lately that has begun to change. There has been an uptick in relevant news recently but not much to sink our teeth into. Think of this edition of Monday Musings as a scan of the land, a check in on the rumor mill, a soapbox to air any grievances held in over the years.

For as much angst and sorrow as the Knicks have given us over the years, it is hard to say you don’t miss them. So, without further rambling, let’s see what is going on at Madison Square Garden.

Pick of the Litter

Steve Mills was replaced rather quickly by former super agent Leon Rose. Scott Perry’s replacement has been a much longer process. It has been mostly radio silence on who the team’s next general manager will be. Current Philadelphia 76ers GM Elton Brand, who Rose worked with closely due to his representation of Joel Embiid, was the only name mentioned as a Perry replacement.

We finally received a front office related update, only it wasn’t about a Perry replacement. The team has said it will not make any changes while the season is paused, but prior to the shutdown reached out to the Cleveland Cavaliers seeking permission to talk to cap expert Brock Aller. The Daily News reported that the Knicks got more than permission to speak with Aller: they made him an offer to be an assistant GM.

Aller has been with the Cavs for 10 years, and has served as a senior director of basketball operations since 2017, with his notable accomplishment, ironically enough, being the acquisition of J.R. Smith and Iman Shumpert for pennies on the dollar.

I know plucking someone from a fellow basement dweller isn’t as appetizing as plucking someone from Toronto, Denver, or Miami, but don’t judge a person by the team he works for. This is coming from someone who was elated to land David Fizdale simply because he was part of the Miami powerhouse Pat Riley built. The end result was an early firing, as Fizdale may have been the Fredo of the family.

Aller could be the polar opposite move. Having someone well versed in the salary cap could be useful should Rose want to pivot quickly to an “all in” scenario or blockbuster trade. Aller was with the Cavs when they made a similar pivot, morphing from the worst team in the league to LeBron James’ revenge tour, seemingly overnight. The pressure of being able to satisfy all of James’ asks can come in handy as New York has a similar insatiable appetite and should the team actually show progress, Rose may want to swing for the fences should an opportunity present itself.

Landing a GM should remain a priority, but flanking that GM with smart people should also be a priority, and Aller seems to fit that bill at first glance.

The Tom Thibodeau to New York whispers have elevated to chatter. Thibodeau has become somewhat of the sole candidate to be the next head coach, unless Mike Miller is retained, with whom Rose was impressed.

Thibodeau last coached the Minnesota Timberwolves, which ended up being a small disaster, culminating in Jimmy Butler chastising the cornerstones of the franchise, Karl-Anthony Towns and Andrew Wiggins, before getting on the first plane out of Minny. The T-Wolves plateaued as a low seed in the West, an improvement, sure, but nothing to get excited about.

What bothers me about the Thibs rumors is not so much Thibs himself: he is a solid coach and would be the team’s most accomplished coach since Mike D’Antoni. The problem is Thibs fits the bill of a coach for a veteran team or a team with a clear plan. He is not offensively illiterate, but he will never be confused for Don Nelson and will always focus on the defensive end more.

If this were the 2012–13 Knicks, sign me up; but it’s not. This Knicks team is young and needs a coach who is well versed in getting through to young players, like another former Knicks assistant who should be at the top of the team’s list: Kenny Atkinson.

Part of me also worries that if Thibs was hired it would heighten the chance of Rose bringing in former clients, Chris Paul and Carmelo Anthony. It would not be the end of the world to see a few more past-their-prime stars come to town—and I’ll admit I would be all in on an Anthony return and enjoy Paul in a Knicks uniform—but it would be more of the same, which is the exact opposite way the team should be looking to go.

The City is Under New Management

One man’s ego or the happiness of millions? That is all I could think about as I saw the New York Liberty officially get their franchise player on Friday night, Oregon’s Sabrina Ionescu. The Liberty, much like the Knicks, have not had many big names or a ton of luck winning anything—but now that may have changed.

For those unaware, James Dolan no longer owns the Liberty, selling the team to Brooklyn Nets owner Joe Tsai in January of 2019. It did not take long for the team’s fortune to change drastically. They have one of the most prolific players in women’s college basketball history and someone who has a legitimate chance to be the best player in the WNBA.

I say that to say this: Dolan should sell the majority stake of the Knicks. Before you write that possibility off, the thought has already crossed his mind, and would be the only way for Dolan to shed the villainous perception so many New Yorkers and Knicks currently view him as. Imagine this: Dolan sells the team in January 2021, the Knicks go on to win the draft lottery and draft Cade Cunningham, triggering the start of good basketball at Madison Square Garden.

Selling the Knicks (and possibly Rangers) would free up Dolan to work in the industry he prefers, entertainment. It’s a win for Dolan on every possible front—he gets a massive payday, work in an industry he enjoys and has the best reputation he has ever had in NYC. And if the Knicks were to win a title after he sells? They would have to build a statue or rename a street after him.

Speaking of Cade Cunningham, will he play college ball next season or will he follow Jalen Green to the G League? Green’s decision to join the G League will have a reverberating effect on high school players moving forward, and can affect the pre-draft landscape as early as next year.

The details on who Green will play for are still being ironed out, there are rumors a whole new team will be formed based out of southern California (where Green is from). If prized high school prospects are able to join existing G League affiliates, the Knicks’ hard work building up Westchester can pay huge dividends.

For the past few seasons the DubKnicks have had much more success than their NBA affiliate and could soon become a recruiting base to pitch incoming players on. Kenny Wooten and Lamar “Parking Lot” Peters were this season’s success stories, imagine if they can now be joined by a Cade Cunningham or a Jalen Green?

Green triggered the dawn of a new day, and if they play their cards right, the Knicks can become a major presence in one of the league’s huge areas of growth.

»READ: Elton Brand would be the wrong choice for Leon Rose’s Knicks GM