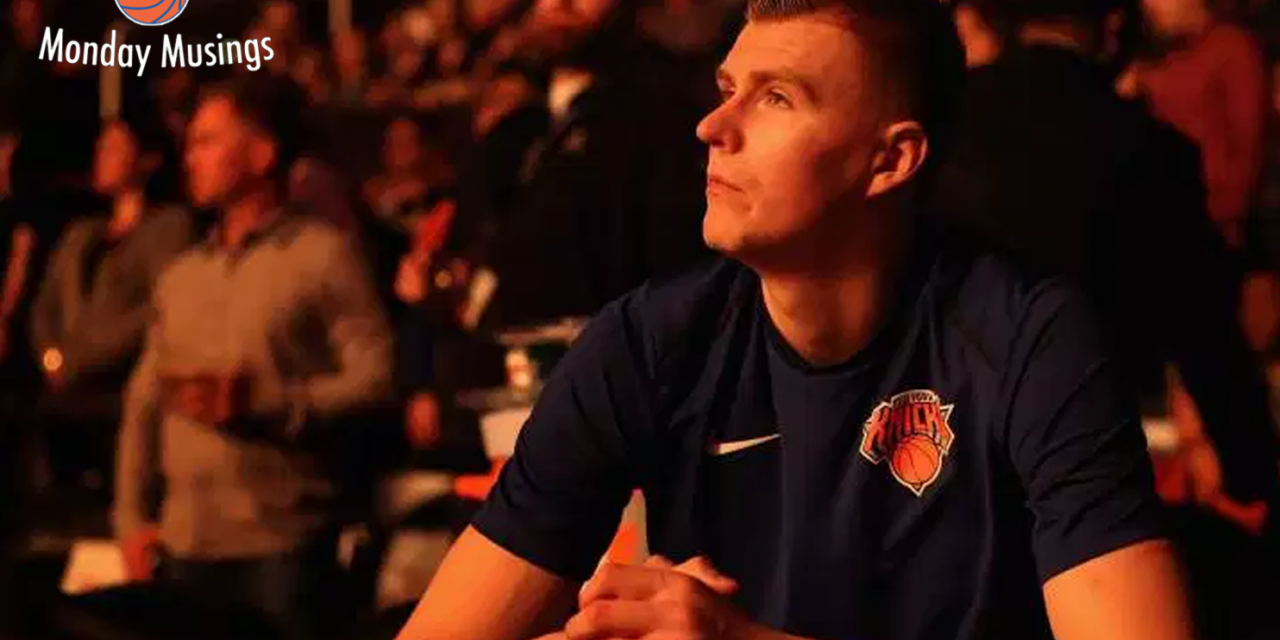 Bryan and Kyle discuss some more off-the-court topics as the Knicks rest up before their Christmas showdown against the Bucks, including Steve Mills’ “hold your horses” comments and Kristaps Porzingis’ mid-February rehab target date in Monday Musings.

Bryan Gibberman: Considering the lack of games, it’s been a weirdly newsy week for the Knicks, and I’ve had a hard time deciding where I want to start.

Let’s go with Kristaps Porzingis. The organization put out a press release stating he is continuing to recover from his knee surgery and will be re-evaluated again in February. Slow and cautious seems to be the way the Knicks are going with this.

I have no problem with it. They’re about to spend what I assume to be the max amount of money they can on their franchise star and they want to make sure he’s healthy long term. It’s the prudent way to handle things.

Selfishly, I do want to see him play some this season to get a peek at how he fits with Kevin Knox and the other young players on the roster.

Kyle Maggio: I don’t mind either option, and I know that doctors have stated his frame, being 7’3” and so lanky, has no bearing on his timeline. However, I can’t help but feel like it matters, and they should be as cautious as possible. I’d like to see him miss the entire season and head into next year rejuvenated, but it’s fine if he plays.

The former option feels as though it’s most likely, and they’d likely slowly bring him back into the fold. He’d come off the bench to begin with, on a heavy minutes restriction. He won’t play back-to-backs. He probably won’t play on the road a ton. I can’t see him playing more than 20 minutes in any game he does play in.

I wouldn’t mind seeing Noah Vonleh—and to a lesser extent Emmanuel Mudiay—run alongside Porzingis so the front office can get some kind of feel for those groupings before they mull over the roster this summer.

Now, you mentioned this would be the prudent way to handle this. One could argue Steve Mills’ comments on free agency are in the same vein, as he claimed the summer of 2019 isn’t make-or-break for the team now.

How did you interpret this, and do you agree with Mills?

Then there’s last year, of course, when we saw Enes Kanter erupt for a 31 point, 22 rebound effort versus Joel Embiid and the Philadelphia 76ers.

Bryan: I don’t think Mills has any choice but to shape this upcoming summer in the vein he did. The mistake he made was framing it the way he did at first.

What I’m curious about is if the Knicks miss on Kevin Durant and Kyrie Irving, is someone like Tobias Harris not considered high enough level to pay for? I’d be perfectly fine sinking money into Harris or a Khris Middleton type.

Sign good players, make the team better, and if something comes along later that’s an upgrade down the road you can always maneuver then.

Kyle: Not that I’d prefer the Plan B, but it is fairly enticing in its own right. Plan A is to build around Durant if he enters the fray, but a plan B to feature Porzingis as the unquestioned alpha and flank him with guys who are stars, or close to it.

I’d be all-in on Khris Middleton and think the offense would be humming with him spacing the floor for Kristaps. This also allows for something we’ve long asked—are the Knicks going to retain any upcoming free agents in their current roster, like Vonleh and Mudiay? You’d have to imagine at least Vonleh would be high on their list if they miss out on the biggest names.